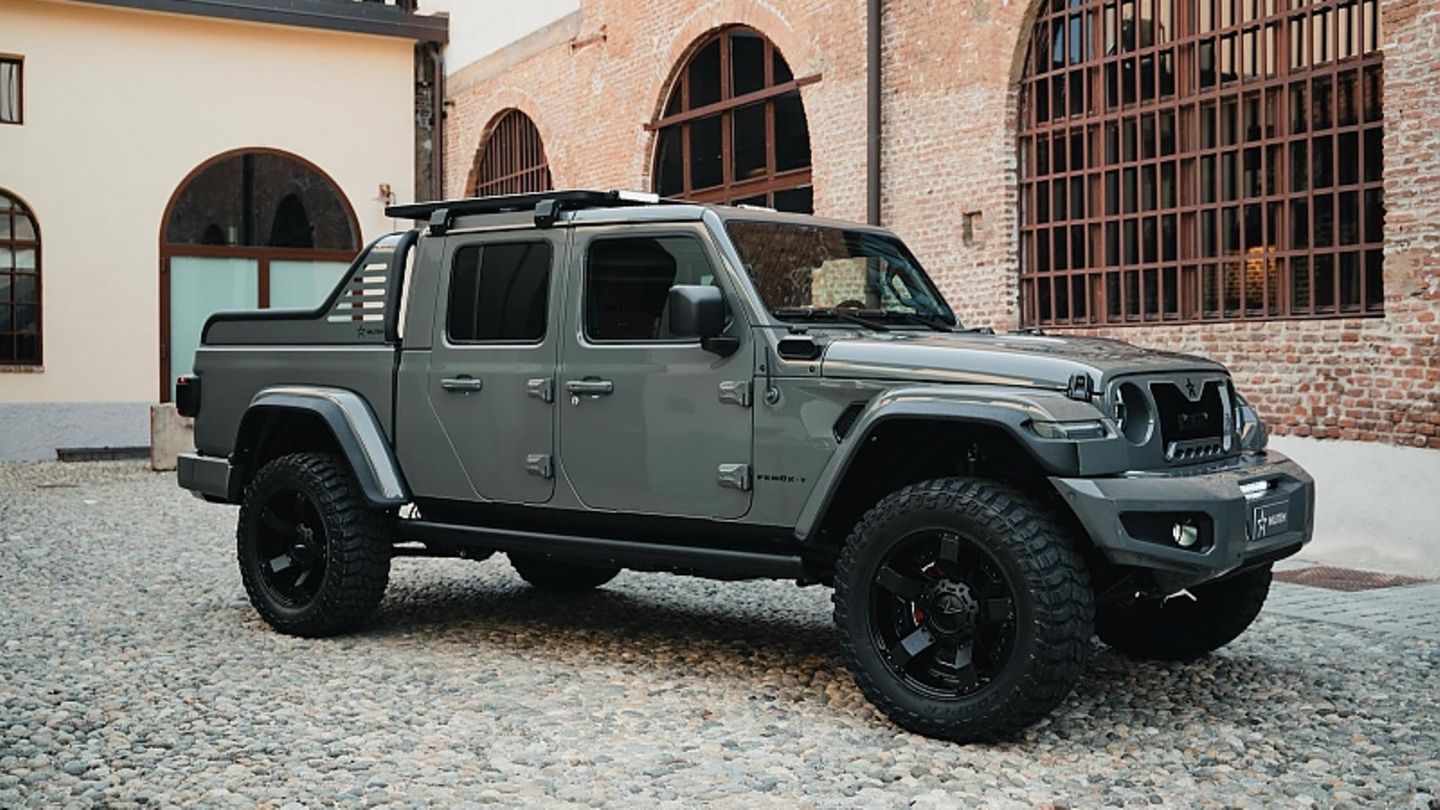 If a Jeep Wrangler, a Renegade or even a Ram Pick Up is too boring for you, you can now treat yourself to a Militem – US power paired with Italian flair. For everyone who loves spaghetti westerns.

The whole thing is not cheap, because a Jeep Wrangler outfitted accordingly in a Militem guise costs easily and easily 110,000 to 120,000 euros. There are, among other things, fine leather seats, exclusive interior customization and bodywork modifications, with which the Militem Ferox almost looks like after months of strength training in the gym. Greetings from Brabus! A model like the Wrangler has lost its characterful radiator grille with the seven air intakes or the branded Jeep signets due to the Militem treatment. Instead of the Trail Rated palette on the front fenders, testament to off-road capability on the legendary Rubicon Trail, a metal badge testifies to what all Militem models carry – the best of both worlds – “American Tech – Italian Made “. Customers can choose between 18 different leather colors, twelve types of nappa leather, 15 Alcantara interiors, denim fabrics, carbon elements or countless contrasting stitching. The conversion of the various models takes place in a production facility near Como and takes between three and five weeks per vehicle.

There have been four dealers in Italy since the market launch in 2019, while in Germany, after pandemic delays and a pioneering operation in Düsseldorf, a second station in Berlin is now opening its doors to customers. “So far, 50 Jeep vehicles have been made into Militem models for particularly demanding customers every year,” explains Militem head Riccardo Cavarzan, “this number is set to triple on the German market.” Ferox was now the even more original gladiator as Ferox T with an open loading area and superstructure as if from an end-time strip. If you prefer something smaller in the city, you can opt for the chubby Jeep Renegade, which appears beefier than ever after the conversion to the Militem Hero. The mighty Dodge Ram 1500, three sizes larger, is parked next door in the Monza showroom.

In addition to massive aprons, sweeping sills and powerful wheel sets, which turn Stellantis models into true Italo brabusses, the more exclusive interiors are particularly good for the Jeep models. Inexpensive plastic surfaces are covered with fine animal skins or chic Alcantara, raising the Militem warriors to a premium level. The chassis, brakes and thunderous exhaust systems are also changed by the muscle cure. Something should also happen with the drives in the near future, because all models are currently on the road with normal off-the-shelf motors. “Only a few customers are interested in the turbo-driven four-cylinder,” says Riccardo Cavarzan, “the fans of Wrangler and Gladiator opt for the 285 hp 3.6-liter six-cylinder and are already waiting for the new 392 eight-cylinder.” The new The top model of the Ferox 500 is even powered by a 6.5 liter V8 naturally aspirated engine with 470 hp and 637 Nm maximum torque, which offers even more power and sound. On request, the models can also be powered by gas, and Militem is already considering the first electric versions.

Share
Facebook
Twitter
Pinterest
WhatsApp
Linkedin
ReddIt
Tumblr
Telegram
VK
Digg
LINE
Viber
Previous articleSwimming Olympic champion: Wellbrock before the swimming world championships: “I see a crisis in the association”
Next articleFinancial dollar does not find a ceiling: it shot up to more than $242 and the gap touched 100%