Technology This is how you will drive a car in the future: The steering wheel was yesterday 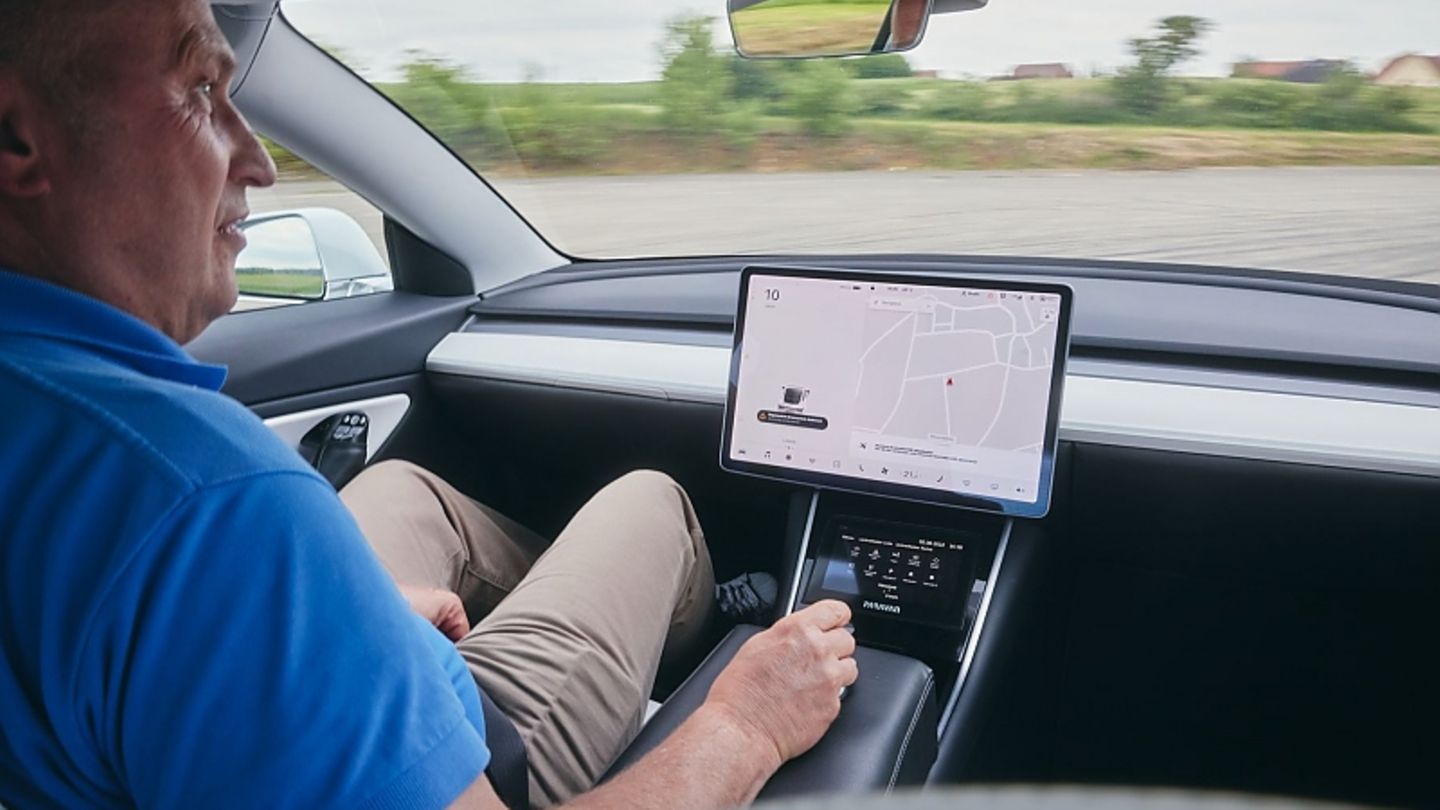 Classic steering wheels and gas pedals will soon become superfluous. Paravan-Schaeffler develops and tests drive-by-wire systems in racing, which will soon also be used in production vehicles. Instead of a valance, it’s called a joystick. We tested the driving of the future

The cockpit of the Tesla Model 3 is even “cleaner”, i.e. even tidier than it already is. Only the vertical tablet interrupts the strictly geometric lines of the interior. Nevertheless, the Stromer accelerates at full power and fires around the corner so quickly that the passengers have to hold on. With just a quick movement of our right hand, we align the vehicle straight again and immediately brake for the next bend. Instead of a steering wheel and pedals, we control the car with a four-way joystick. Left and right for the directions, if you push the small lever forward, you brake, backwards you accelerate. Almost a video game under real conditions on real roads. Any mistake would be disastrous, but the US Stromer reacts immediately and reliably to the slightest movement of the hand. A sample without value? A fun project? Are you kidding me? Are you serious when you say that! “This is how cars will be driven in the future. Without cranking the steering wheel,” explains Hubert Hügle, Head of Development at the Schaeffler Paravan joint venture.

Later, climb into a VW Arteon and then into a Mercedes-AMG C63 to experience the advances in Space Drive-by-Wire technology – literally. While the steering still reacts very synthetically in the VW, it’s a completely different story in the 2.8 version installed in the Mercedes. The steering is more engaging and feels more natural. A big step that required a number of test kilometers and hours of simulation. The next expansion stage will be number 3.0, which will be launched in mid-2023. Then Space Drive develops into an add-on system that can be subsequently integrated into the vehicle systems. The module meets the important safety standard ISO 26262, which forms the basis for subsequent series production. In addition, many detail improvements take place. For example, the power transmission or the feedback will take place without a toothed belt and components such as actuators and circuit boards are also smaller. The technology is so groundbreaking that a large supplier, Schaeffler, grabbed it right away, resulting in the Schaeffler-Paravan joint venture.

The aim of the cooperation is to develop drive-by-wire ready for series production. In other words, controlling the car by cable without a steering wheel column and pedals. Ultimately, it is about nothing less than the key technology for autonomous driving. The entire automotive industry is working on this. “We’ve had everyone here before. Also manufacturers like Audi, BMW or Mercedes,” says Hügle. What makes the small company from Baden-Württemberg that specializes in the development of electric wheelchairs and the conversion of cars to suit the needs of people with disabilities so interesting? Part of the answer lies in the question. Because with a physical handicap, moving a car in the traditional way is often no longer possible.

So more than 20 years ago, company founder Roland Arnold came up with Space Drive, a way of moving a vehicle with a joystick. On the threshold of drive-by-wire and autonomous driving, these experiences are worth their weight in gold. Hubert Hügle puts the joint venture’s technological lead over its competitors at around three years. “If I were to produce steering systems and steering wheels, I would be concerned,” says Hügle. In the future, you will circle the vehicles with two joysticks or a rigid valance with a short push around the corner. “You get used to it in no time, and you’re faster because you don’t have to travel any distance,” explains engineer Alexander Uphoff. Soon it will also be possible to radically change the steering characteristics at the touch of a button. Parking with only a small steering angle or ultra direct on the race track. The possibilities don’t end there. If the driver is about to lose control of the car, the system can countersteer before the driver even registers the danger. To do this, the system uses the data from the sensors of the driving assistants. These include the steering angle, wheel slip, wheel position, yaw moment and the position of the gas pedal. The steering influences can then also be individually configured. For example, it will be possible to cushion impacts due to the uneven road surface and still communicate clearly.

Schaeffler-Paravan is already testing this drive-by-wire steering system in the DTM. Racing is all about hundredths of a second and when a driver has to use less effort, he stays highly focused for longer. In principle, this technology is nothing more than the steering wheel in a video game, in which an electric motor simulates force feedback. In fact, such a system was the starting point. But the feedback is of course far too coarse to be able to move a real car even remotely fast. “When it rained, the drivers parked the car because they no longer felt safe with the original system,” says Hügle. So there was still a lot of development work to be done. “Anyone who thinks that you just run a few simulations is very wrong,” says Alexander Uphoff. It starts with the fact that the steering angle created by the electric motor goes hand in hand with the position of the wheels, which is also brought about by electric machines with the help of actuators. It has to feel natural or correspond to people’s expectations.

The tough everyday test consists of countless rounds and the interpretation of data. Every car is stuffed with gauges. The sensitive popometer of the professional pilots is important for writing software that controls the electromotors and provides confidence-inspiring feedback. It’s hard work for the racers. It’s not about records, but about reproducible laps with times that are as identical as possible. This is the only way to reliably identify a phenomenon and draw the right conclusions. As soon as the driver detects understeer in a corner, the engineers look at how the telemetry data has changed and try to draw conclusions for the drive-by-wire system software. Over and over again. Countless kilometers are necessary to perfect this so-called “Real Time Operation Software” (RTOS) and thus to realize the driving of the future. Ultimately autonomous, without a steering wheel, but with software and servomotors.