Jackery power boxes in the test – the mobile power for adventurers 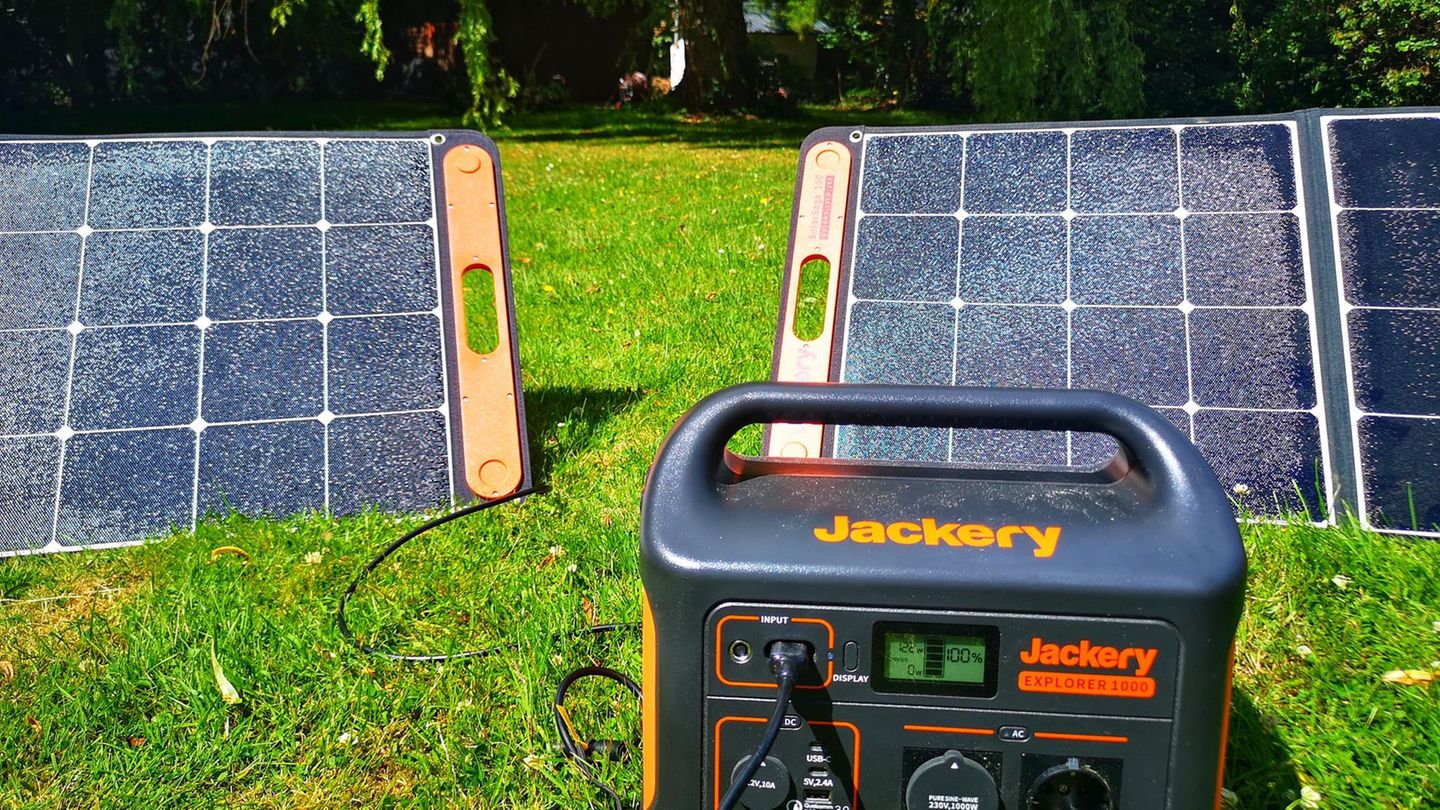 There are power boxes that you can hardly lift, the Jackery Explorer 1000 and 500 are primarily intended for camping and outdoor adventures. It is best to combine them with the appropriate solar bag.

Power box, the third. This year we looked at mobile power suppliers. A monster device that is suitable for craftsmen and can also supply a house in a cluster of several modules. A box in the 2000 watt class, which with its 27 kilograms can just about be described as mobile. However, for many camping fans, these boxes are likely to be too bulky, too heavy and also too expensive. They are actually too big for a vehicle the size of a VW bus.

For campers there are the smaller boxes from Jackery – we have them and tried out. The shape with an integrated carrying handle already shows that the Explorers are really intended for mobile use. You can easily take them anywhere with the handle and not just “relocate” with a show of strength. There is an LED lamp for each box.

The 1000 weighs 10 kilograms, the 500 6.4 kilograms. The naming follows the usual rules: 1000 means that 1000 watts of continuous power can be delivered and the maximum storage capacity is around one kilowatt hour. With the 500 it is half that. The eye-catching orange is suitable for leisure use. The case looks stable and valuable. The openings are protected – but as with all devices of this type, we wouldn’t leave them out in the rain.

The electricity export works via the usual standards: 230 volts, USB and 12 volt vehicle connection. The devices are charged either solar or via the car connection, with a separate charger it is also possible to connect to the mains. With the small box, the solar bag is plugged in via the Jackery jack plug. The 1000 can connect two panels, this is done using an adapter, which then goes into the box with a classic Anderson connection.

Both boxes can use the be operated – output 100 watts, degree of conversion 23 percent. However, panels from other manufacturers can also be used. The bags themselves and the panels make a very good impression and are not overly expensive. So you can use the “original” with a clear conscience. Only real price hits with rather deterrent customer reviews are noticeably cheaper. Nice feature: A device can also be charged directly from the pockets using a USB cable. If you put it in the Explorer, the following setup is recommended: The small 500 gets along well with one panel. There should be two for the larger box, but one panel is also possible. With two you can produce more than one filling on a sunny day, so you can use electricity during the day and fully charge the box. The specified values ​​of 100 watts per panel can be achieved, but only on a sunny summer day without clouds. Under optimal conditions, the yield is even above the specified 100 watts. In the foggy autumn, the electricity harvest naturally shrinks massively.

The larger box is also easy to charge on the road. A few hours in the morning and evening and in between in the car via the alternator. The solar bag is absolutely necessary if the vehicle is only standing for a few days, but then two modules should easily fill the box. Again, you have to keep in mind: bigger is not necessarily better. A box of the 2000 or even 4000 class cannot be filled with the car cable while driving. And to fill up 2000 or even 4000 watt hours with the sun in a reasonable time, you need a whole swarm of panels. In addition to the space required by the larger box, the solar bags must also be stowed away.

As always, the pocket system has advantages and disadvantages. The disadvantage is that the bags should not be mounted permanently on the camper or hut roof – they do not load automatically, they have to be set up in each case. It is good that the system remains flexible and is not tied to the vehicle. It is also practical that you can place the panels in the blazing sun and the camper can stay in the shade. The direct orientation towards the sun massively increases the yield compared to flat mounting on a roof. For someone who is traveling with a tent and not with a camper, there is no alternative to the bags anyway.

What are the boxes good for? With a box with a maximum power output of 500 watts, it should be clear that it was not primarily built to operate “normal” 230 volt devices. Neither delivery nor storage capacity are sufficient for this. With such a box you can provide LED light, listen to music, operate smartphones and laptops – all day long. And with a solar bag for charging you can stay “self-sufficient” for days. 230 volt devices must be carefully selected and if so, they can only be operated for a short time. So this fits for essentials and entertainment while camping.

The Explorer 1000 expands the usage significantly. Light, phone and music and streaming on the pad work endlessly. When camping, you can also use a cool box and, in a camper, the obligatory water pump, without the box quickly running out of juice. If you like, you can occasionally connect a 230 volt device. If you pay attention to the wattage, even a hair dryer or a coffee maker will work. For a small camper, that’s quite significant. The comparatively small capacity of both boxes also means that they are charged relatively quickly when driving through the car socket. It’s also easier to take such a small box with you to charge from a power outlet than to move a 30 or 50 kg box. You can’t run more power consumers all day long. But in the hobby sector there are many tools that can be operated independently of the mains with the 1000 series. For example jigsaws, drills, grinders and the like. With a large table saw it will probably be tight.

We had a lot of fun with the boxes. Getting started with “solar technology” is child’s play, instead of complicated coordination, the panel only has to be plugged into the box and the solar system is ready. Sure, larger boxes can always do more – but for many purposes they are too big and of course expensive. A box for almost 4000 euros is simply too expensive to occasionally provide some entertainment on the beach. The Explorers, on the other hand, are truly mobile – they are easy and simple to take anywhere and then ready to use.

Prices are in constant flux today. The Explorer 500 currently costs around 650 euros, the 1000 twice as much. The solar bags with 100 watts are around 330 euros. But that’s just an indication – in bundle combinations, the total price is significantly reduced. At Jackery you should also note that the guarantee is extended when you buy it in your own shop.

From June 20th to June 27th there is a discount of 10 percent on all products with the code stern10. You will find the solar generator 1000 with panels

You can find the solar generator 500 with one panel here