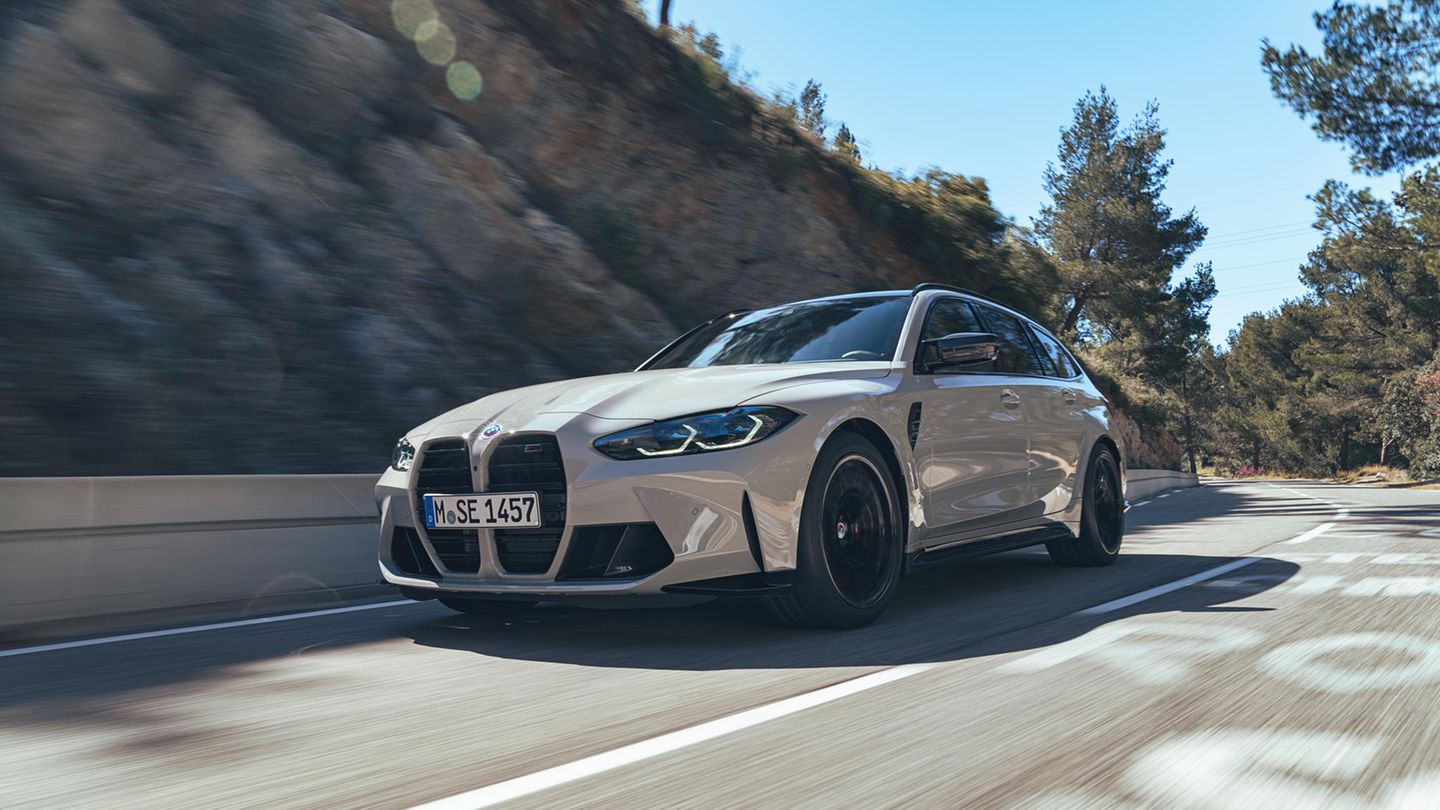 With the M3 Touring, BMW presented a station wagon model for the first time. The vehicle focuses on rear-wheel drive and should impress with sporty details. Never before has a station wagon rounded the Nordschleife of the Nürburgring so quickly.

After the sedan, the coupé and the convertible, BMW presented the very first M3 Touring in the course of the 50-year history of its subsidiary M. The new model variant celebrates its world premiere this week at the motorsport event Goodwood Festival of Speed ​​in England.

“The M3 Touring is a heart project of the M GmbH” the “Focus” quotes the project manager Robert Pilsl. “We were able to take over the all-wheel drive and also the rear axle of the M3 sedan without any losses or compromises.” In fact, the five-seater is identical to the M4 and M3 sedan down to the B-pillar. The technology is also the same.

The M3 Touring has 510 hp and a maximum torque of 650 Newton meters. Its 3.0 liter engine forms the basis for the drive unit of the new BMW M4 GT3 long-distance racing car. The Touring comes with all-wheel drive, although there is also a mode for increased rear-wheel drive and full rear-wheel drive only.

In addition, the six-cylinder in-line engine with TwinPower Turbo technology and 8-speed gearbox accelerates from 0 to 100 km/h in 3.6 seconds, as the Munich-based company states. The station wagon needs 12.9 seconds to accelerate from a standing start to 200 km/h. In addition, the top speed is throttled to 250 km/h. With an available driving package, however, it can be increased to 280 km/h. BMW specifies the combined fuel consumption as 10.4 – 10.1 liters per 100 kilometers.

In the station wagon model, “the typical M combination of dynamics, agility and precision is implemented with unrestricted suitability for everyday use and long-distance journeys,” explains BMW in a press release. In fact, no station wagon has lapped the Nordschleife of the Nürburgring as quickly as the M3 Touring.

The vehicle has an individual vehicle concept with clearly designed surfaces and athletic shapes as well as the M-specific design features. These are, for example, a vertically aligned, frameless kidney, the large side air intakes, the wheel arches and the flared side skirts, which form a black band together with the front and rear apron attachments. The roof is also designed in high-gloss black as standard.

A curved display is installed in the interior of the BMW M3 Touring. The vehicle also has a 5G-capable antenna system and offers Apple CarPlay and Android Auto as standard equipment. This means that the functions of a smartphone can be used in the car’s infotainment system. Two previously stored driving settings, for example in relation to the engine, chassis and brake system, can be called up using buttons on the steering wheel.

Purchase price starts at over 97,000 euros

The 4.79 meter long Touring weighs 1,865 kilograms (without driver) and is 85 kilograms heavier than the sedan. In order to save additional weight, the vehicle will not be available with a panoramic glass roof. The storage space of 500 liters can be expanded up to 1510 liters by folding down the rear seat backrests.

The standard equipment includes light-alloy wheels – 19 inches at the front and 20 inches at the rear –, electronically controlled shock absorbers and the M-Servotronic steering with variable ratio. Among other things, sports seats, leather interior and a rear window that can be opened separately are also part of the standard equipment. Carbon bucket seats for the driver and front passenger as well as a carbon-ceramic brake system are optionally available.

Among other things, a front collision warning, a lane departure warning and a parking assistant are installed as standard. For a surcharge, BMW offers, among other things, a steering and lane guidance assistant, active cruise control with stop and go function, traffic light recognition and active navigation guidance.

From September, customers can order the BMW M3 Touring, which will only be available in the Competition version. The price in Germany should be at least 97,800 euros – and thus 1000 euros more than the BMW M3 Competition with xDrive. The Touring will be launched with the start of production in November.