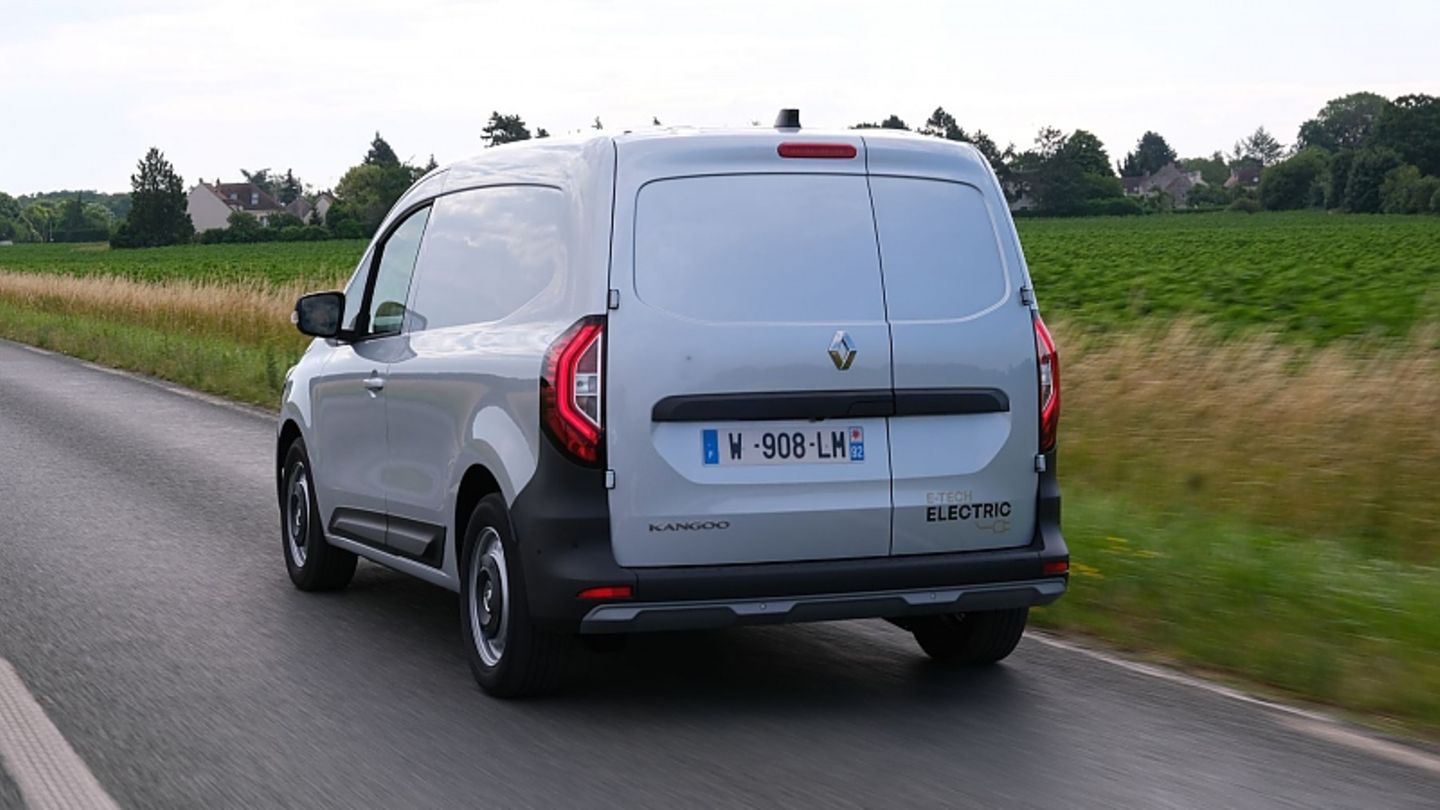 The Renault Kangoo Rapid E-Tech Electric promises a range of up to 287 kilometers with its 44-kilowatt-hour battery. Perfect for delivery services and crafts in the city.

Renault and Mercedes are working together on the Kangoo and the Citan. So far so good. But when it comes to business, the friendship quickly ends. That’s why the French repeatedly emphasize the big difference between the Kangoo and the German technology relatives, without naming it. Understood. The Sesame-Open-You portal turns the classic high-roof station wagon into a commercial vehicle with more practicality. The concept is known from the model brother with a combustion engine and has already been sufficiently praised. But the fact that it also gets the electric version shows that you no longer have to preach renunciation with this electric high roof combination. “With the new Kangoo Rapid E-Tech Electric you get everything that the other variants have and even more,” says project manager Christophe Ragot, referring to the efficient air conditioning using a heat pump.

Like its predecessor, the French e-transporter will be available in two basic configurations. It starts with the 4.49 meter long L1 version. The L2 variant will follow later, with a volume of 4,900 liters. That’s 1,000 liters more than the L1 model we were traveling in. The maximum payload for the Renault Kangoo Rapid E-Tech Electric is 526 kilograms. This is more spacious than the petrol engine (478 kg) and the diesel dci 90 (415 kg).

The engine with its 90 kW / 122 hp and a torque of 245 Newton meters nominally pulls no trees out. But the electric van is doing well with it. After all, urban areas are the preferred area of ​​application for the E-French. With a top speed of 135 km/h, you can also get along well on the motorway. The performance of the Kangoo Rapid E-Tech Electric is calculated with care, because the battery has a capacity of 44 kilowatt hours, which is enough for a maximum of 287 kilometers. Even if this value is not quite reached in everyday life with heavy luggage, it is quite suitable for delivery services and other urban logisticians. More engine power would then suck more energy from the batteries.

Renault specifies the average consumption as 18.6 kWh/100 km. During our test drive with two adults and a payload of 150 kilograms, we achieved 16.1 kWh/100 km. We were also often in Eco mode, where the power is limited to 56 kW / 76 hp and the top speed to 110 km/h. Perfect for the city. If you’re not in a hurry, this power is also sufficient on country roads, but when fully loaded you’re fine with normal mode. If you do need all your power reserves, pressing the accelerator pedal helps. The suspension is rustic to match the blue man’s intended use. The fact that there are clearly visible welding seams in the loading compartment is also not unfamiliar with the industry. Incidentally, the three-stage repair works without any problems, although one-pedal driving is not possible. If you act with foresight, you can leave the energy recovery at level 1 and maximize the power-in-the-battery shoveling yourself with a sensitive foot.

It is charged via the charging socket, which is hidden behind the classic rhombus (not yet the new version of the brand logo, by the way) in the radiator grille. At a public charging station (16 A) with 11 kW, it takes 2:40 hours to fill batteries from 15 to 80 percent, at 22 kW (32 A) it is 1:30 hours and at the maximum charging speed of 80 kW (DC) this process takes 37 minutes. The fact that the Kangoo is basically a petrol engine can be seen from the traditional fuel filler flap and from messages in the information display such as “Engine is running. Ignition off”.

Otherwise, the electric Kangoo with many useful shelves and the easy-care plastic charm consistently gives the overalls. The frank, open-sesame combination mentioned at the beginning, consisting of a sliding door and a passenger door that swings open in the opposite direction, only reveals its full charm if you can use both components. However, this optional extra drives the base price from 40,448.10 euros to 41,638.10 euros. The Citroën ë-Berlingo length M, equipped with conventional doors, covers 280 kilometers, has 100 kW / 136 hp and costs 37,790 euros. Quite an argument in the commercial vehicle industry, where every cent counts. At least the cooperation partner is under control in terms of time: The technically related Mercedes eCitan will not be launched until the end of the year, while the Kangoo Rapid E-Tech Electric can already be ordered. An important advantage. First come first serve. Also for commercial vehicles. As I said, friendship ends when it comes to business.