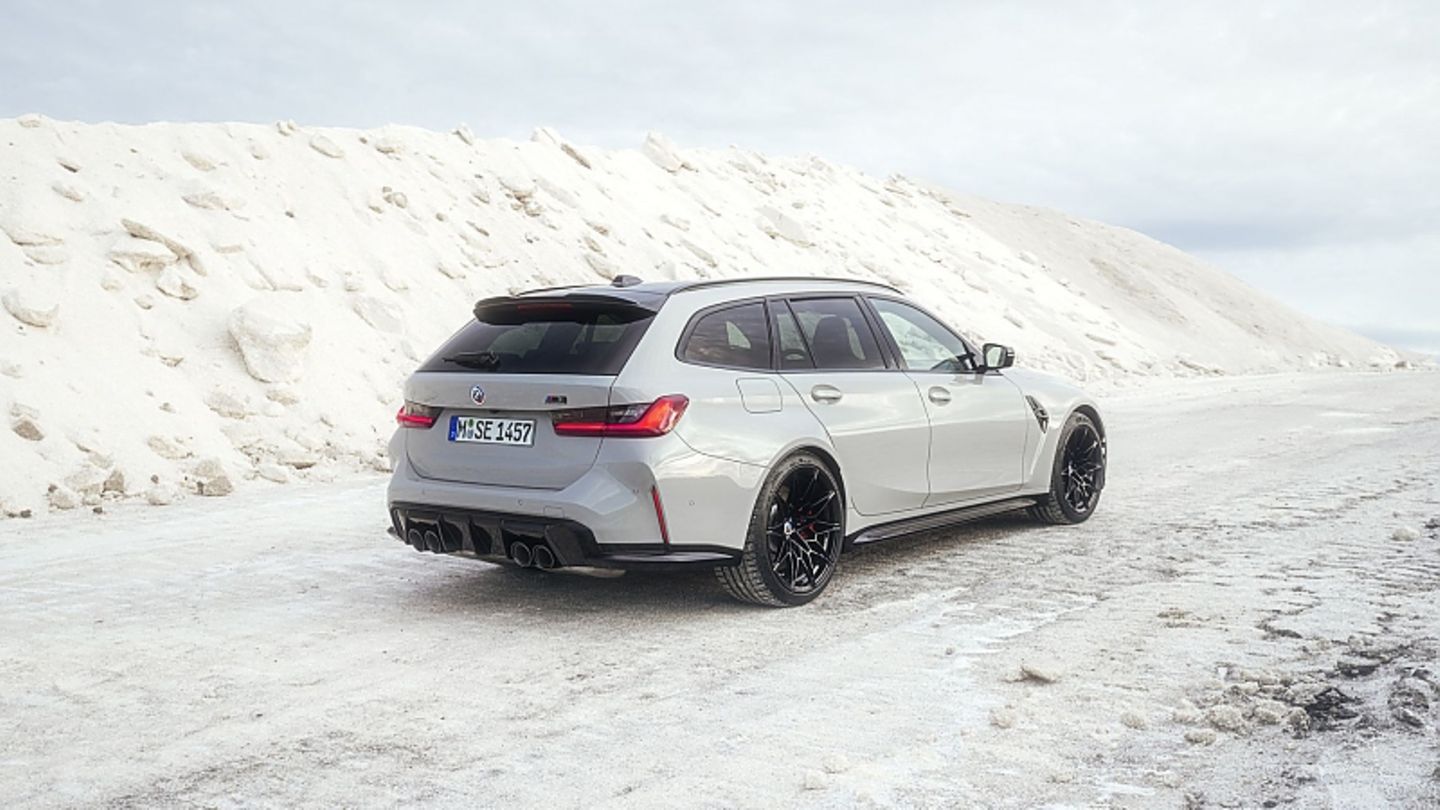 Hard to believe, but true. For the first time in its 50-year history, BMW M GmbH is launching the BMW M3 as a touring version. And only as a competition. Now all mountain bikers can rush into the Alps with 375 kW / 510 hp.

It was not only due, it was overdue for the BMW 3 Series Touring to be available as an M. Nevertheless, the Munich company took 50 years to come up with the power station wagon. 50 years? Yes, M GmbH has been around for exactly that long. So the fast luggage transporter is a real premiere. “The M3 Touring is a project close to the heart of M GmbH,” explains project manager Robert Pilsl. That explains even less why it took so long for the M signet to be emblazoned on the rear of the mid-range station wagon. “We think that all-wheel drive belongs in an M3 Touring,” says the wiry man, who must have done a few test laps himself, and in the same breath provides the technical explanation. “We were able to adopt the all-wheel drive and the rear axle of the M3 sedan without making any sacrifices or compromises.” The trick worked: at 7:35.060 minutes, the BMW M3 Touring is the fastest station wagon that has ever lapped the Nordschleife of the Nürburgring.

As this record drive shows, the power station wagon is only available in the Competition variant with an eight-speed automatic transmission. This means that the M3 Touring with 375 kW / 510 hp and a maximum torque of 650 Newton meters races over the asphalt. That is 44 kW / 60 hp more than the Audi RS4 Avant. We assume that the Mercedes-AMG C63 will outperform both Bavarians. But with a four-cylinder engine as a plug-in hybrid. Not for everyone. Let’s stay with the BMW M3 Touring. It has a trunk volume of 500 liters, which increases to 1,510 liters when the rear seat backs are folded down. The all-wheel drive ensures that the car can reach 100 km/h from a standstill in just 3.6 seconds and that it can go further up to a maximum of 280 km/h with the optional M Drivers Package.

Sounds impressive, but also represents a challenge for the engineers. Because with such a fast car that is 4.79 meters long, the torsional rigidity of the body has to match the power. Otherwise the power load quickly becomes a nightmare. Especially since the hat shelf of the sedan is not available in the Touring. If you don’t own a headgear, you’ll be happy. However, the stabilizing support system between the C-pillars is then also missing. So the engineers pulled in the complex strut package from the M3 and M4 with a strut bracket behind the rear axle, thus connecting the reinforcements to the rear. Torsional stiffness still seems to be a big issue with the M3 Touring. There will be no panoramic glass roof. That would also have increased the weight, which at 1,865 kilograms (without driver) is 85 kilograms heavier than the sedan anyway.

“A BMW M3 has to drive like a touring like an M3,” says Robert Pilsl, explaining the technicians’ attention to detail. It’s mostly focused on the rear, as the Touring is identical to the M4 and M3 sedan down to the B-pillar. Downforce is just as important for the Munich power station wagon as it is for the two brothers, especially at high speeds. This requires the combination of diffuser and roof spoiler. When looking at the rear, the thick cheeks above the 285 rolls are noticeable. Because of the rockfall, the engineers covered it with a film.

The technology is identical to that of the M3 and M4. The chassis is specially designed for the fast station wagon. An active differential on the rear axle is already set in every real BMW M model. All-wheel drive favors the rear axle and presents the driver with a whole range of configuration options: 4WD, 4WD Sport and M-traditionally pure rear-wheel drive once the stability control is deactivated.

The infotainment is taken over by the two M-technology relatives. That means: large apps tiles, a touchscreen as a command center, crescent-shaped displays in the virtual cockpit, a rotary push button and a head-up display. The BMW M3 Touring will be available from dealers from December and will cost at least 97,800 euros in Germany, which is 1,000 euros more than the Munich-based company is calling for the BMW M3 Competition with xDrive. “The car will do well,” Robert Pilsl is certain. However, not in the USA, the Americans are left out as haters of station wagons. The BMW strategists anticipate particularly high demand from the home country and Great Britain, but buyers for the BMW M3 Touring will also be found in the rest of Europe as well as in Japan and Australia.