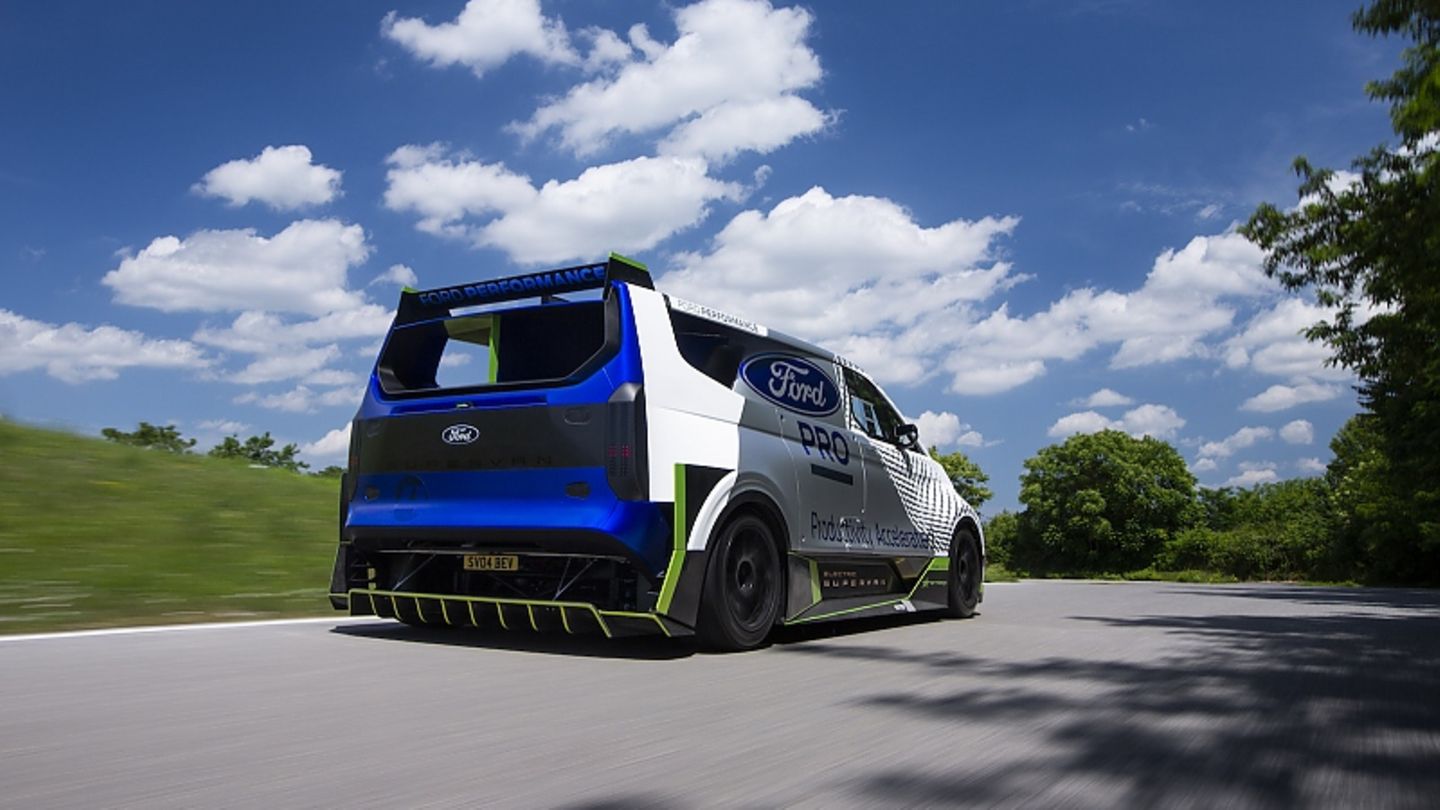 Customers will have to wait until next year for the new Ford E-Transit Custom. In the meantime, you can dream of wild acceleration – in the 2,000 hp over-transit for the race track. Americans have had a decades-long tradition of supervans.

This fire accelerant has absolutely nothing to do with a normal Ford Transit as a commercial vehicle. Since the waiting time until the new model is still a little longer and everyone is talking about electric commercial vehicles, the development department of Ford of Europe was allowed to play a little and create a vehicle that should cause a stir at the Festival of Speed. What is vaguely reminiscent of a Ford Transit loading master carries four electric motors, a slim 50 kWh battery and a high-performance drive with a maximum output of around 2,000 hp. This enables the white and blue panel van to accelerate from zero to 100 km/h in under two seconds. The chassis of the spectacular one-off electric vehicle is based on the architecture of the recently introduced E-Transit Custom, which will be available to customers next year as a purely electrically powered version of a one-ton panel van.

The Ford Pro Electric Supervan was developed by the in-house performance team, which is otherwise responsible for the motorsport models, and was supported in the six-week implementation by the Austrian rally team from STARD – Stohl Advanced Research and Development. “With 2,000 hp of battery-electric power, the Ford Pro Electric Supervan offers endless driving pleasure and combines this with a distinctive design inspired by the new E-Transit Custom,” says Mark Rushbrook, director of Ford Performance Motorsport just for sheer power. The Electric Supervan’s systems have tremendous computing power, allowing the engineers to optimize its performance on the circuit in real time – just like a sophisticated racing car.” Steel frame and body components from racing. The specially designed 50 kW battery sits low and centrally in the chassis to enable the best possible weight distribution. The Electric Supervan’s battery pack charges up in around 45 minutes on a fast charger.

Ford introduced its first Supervan in 1971. At that time a mid-engine from the Le Mans winning car Ford GT40 was transplanted into a Transit Mk 1. For the second model, engineers slipped a second-generation Transit-generation fiberglass body over the monocoque and 590-hp Cosworth V8 of the Ford C100 Group C race car. The concept of the third supervan in 1994 was very similar, with a screeching 650 hp Cosworth HB Formula 1 engine providing adequate propulsion. In keeping with the times, the new supervan is powered purely electrically and with a gigantic output of 2,000 hp.