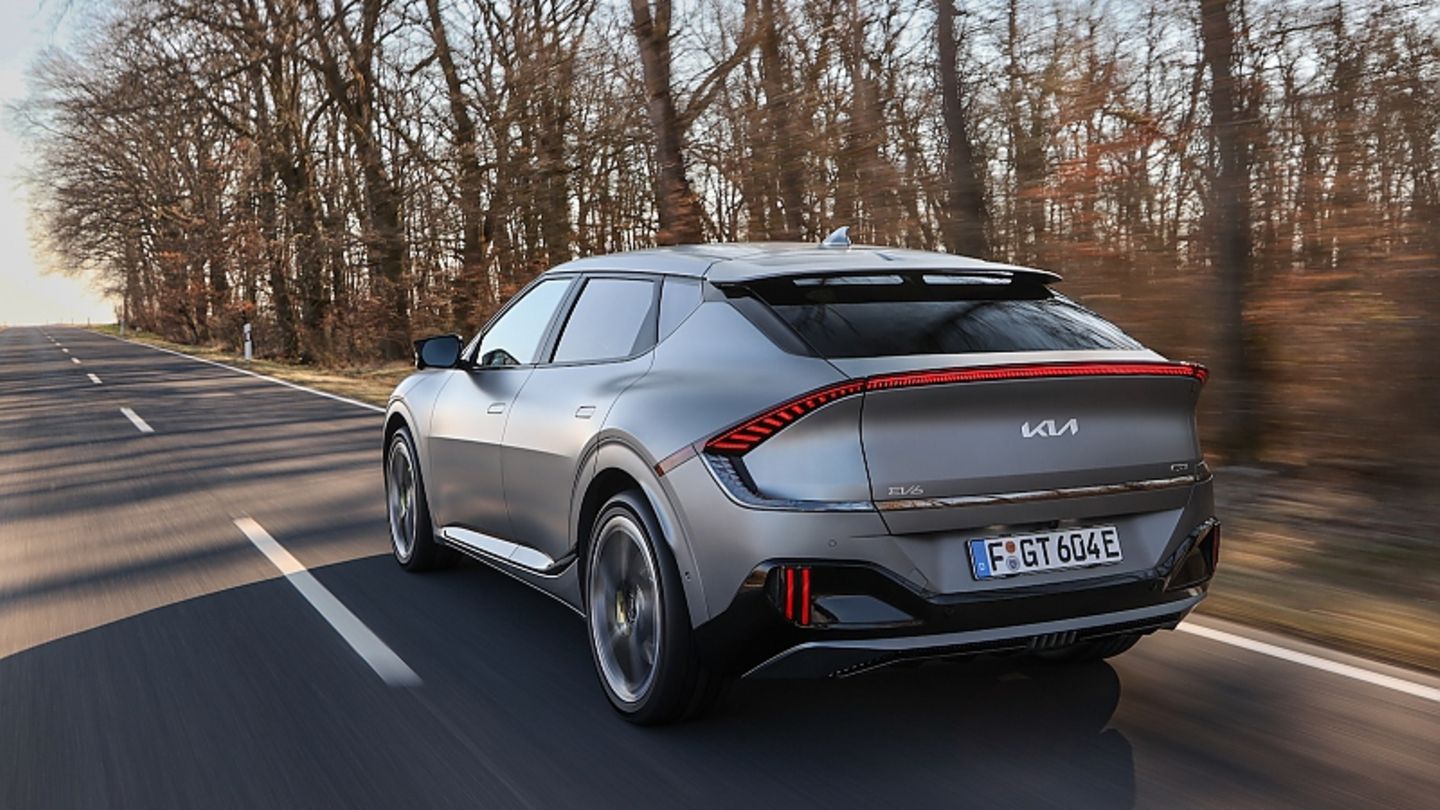 Now Kia is not only dangerous for volume manufacturers. The model name of the Kia EV6 GT sounds so boring, like that of a tired trim level. But the EV6 GT is a real neutron accelerator. Get in and off you go!

The numerous models on the Volkswagen Group’s modular electric kit make a real effort to jump the 300 hp mark. The limit is anyway early on at 160 or at most 180 km/h. You can only laugh about that in Korea. The Kia EV6, like the sister model of the Hyundai Ioniq 5, provided a lot to talk about. Kia is now bringing its 4.70 meter long EV6 to customers as a GT version with 430 kW / 585 hp and 740 Nm. The European competition just looks down in shame. With this performance potential, Kia’s EV6 GT even surpasses most models from premium manufacturers such as Audi, BMW, Polestar, Cadillac or Mercedes.

So much courage calls for applause and even if the 585 hp top model helps image and positioning rather than increasing sales figures significantly. Hyundai subsidiary Kia can only be accused of the fact that the EV6 is just as bold in terms of design as its wide range of drives, but the top model looks just like the tamer engine variant with 325 hp. Since there are no flared wheel arches, lavish spoilers or conspicuous air intakes, the Kia EV6 looks more like a GT design package that dealers can easily sell to customers with weaker motorized versions. Like a BMW i4 M50 or a Mercedes AMG EQS 53, the top model of the Kia EV6 GT also lacks the corresponding insignia of power inside and out as a sign that a tremendous amount of sportiness is working under the hood or better on the axles. A few applications here, a signet there and then the admittedly 21-inch wheels – that’s about it.

An electric motor with 160 kW / 218 hp works on the front axle, while on the rear axle a second power pack with 270 kW / 367 hp works wonders in terms of drive. When cruising casually on country roads, apart from the yellow-green button on the two-spoke steering wheel, not much indicates possible outbursts of power. A push on the same and the warp drive is ignited. In a fraction of a second, the EV6 GT flattens its ears, tenses its muscles and looks like a completely different car. A comparison with Michael Knight’s film car Kitt suggests itself, which had the dubious Super Pursuit mode implanted in the course of its cinematic life cycle. In contrast, the boost mode was only a tame breeze, but with Kia’s flagship electric model, no powerful spoilers extend, no body widens, but the vehicle becomes a racing joker without visual emphasis.

The thrust of the 470 kW / 585 hp Korean is enormous. Even if it has no meaning in everyday life – from a standing start, the electric all-wheel drive vehicle can sprint to 100 km/h in 3.5 seconds and cracks the 260 km/h mark on the digital speedometer. An electronic locking differential ensures that the ample power is not only converted into ideal propulsion on straight stretches. The bike that has the best traction gets the most fodder – that’s how it should be. The braking performance of the almost 2.3 tonne crossover, however, could be better. Although the brakes (front 38 / rear 36 cm diameter) are quite committed, there are still a few wishes when it comes to metering. The situation is similar with the steering behavior. The Kia EV6 GT shakes little even with rapid load changes, but could offer more direct feedback from the front axle. And the two-spoke control is not just visually a mediocre occupation.

Despite the tremendous boost, the EV6 GT doesn’t just want to be a kilowatt banger. It is particularly convincing in the other driving modes apart from the GT program and offers an attractive range. But since the battery pack is not exactly generously dimensioned at 77.4 kWh, the driver of the sports machine has to go to the charging station after 424 kilometers at the latest. This is only partially compensated for by the fast 800-volt battery technology, because a little more than 400 kilometers quickly becomes hardly more than 300 kilometers in cold winter temperatures and the corresponding consumers. In just under 20 minutes, the battery pack installed between the two drive axles is boosted from 10 to 80 percent if the charging station cooperates. That’s a faster value.

In view of the lavish performance and the sporty driving performance, one should not underestimate the comfort qualities of the EV6 GT, which costs at least around 70,000 euros. You sit a bit too high in the good sports seats, but with good, noteworthy long-distance qualities. In addition, the occupants look at two 12.3-inch displays and the operation via buttons on the steering wheel, touchscreen and the somewhat confusing double switch bar on the center console works quite well. When it comes to voice control alone, the EV6 was once again lacking in a model from Kia / Hyundai. Here the Koreans are not on the level of brands like Polestar, Audi or BMW – unfortunately. The good impression in the interior continues in the rear. Here, too, two adults can sit comfortably, even if the rear bench seat is likely to be more contoured. The 480-litre load capacity can be expanded to up to 1,260 liters by folding down the rear seats. At the front of the frunk there is a meager 20 liters of volume. Attention: the payload is just 350 kilograms.