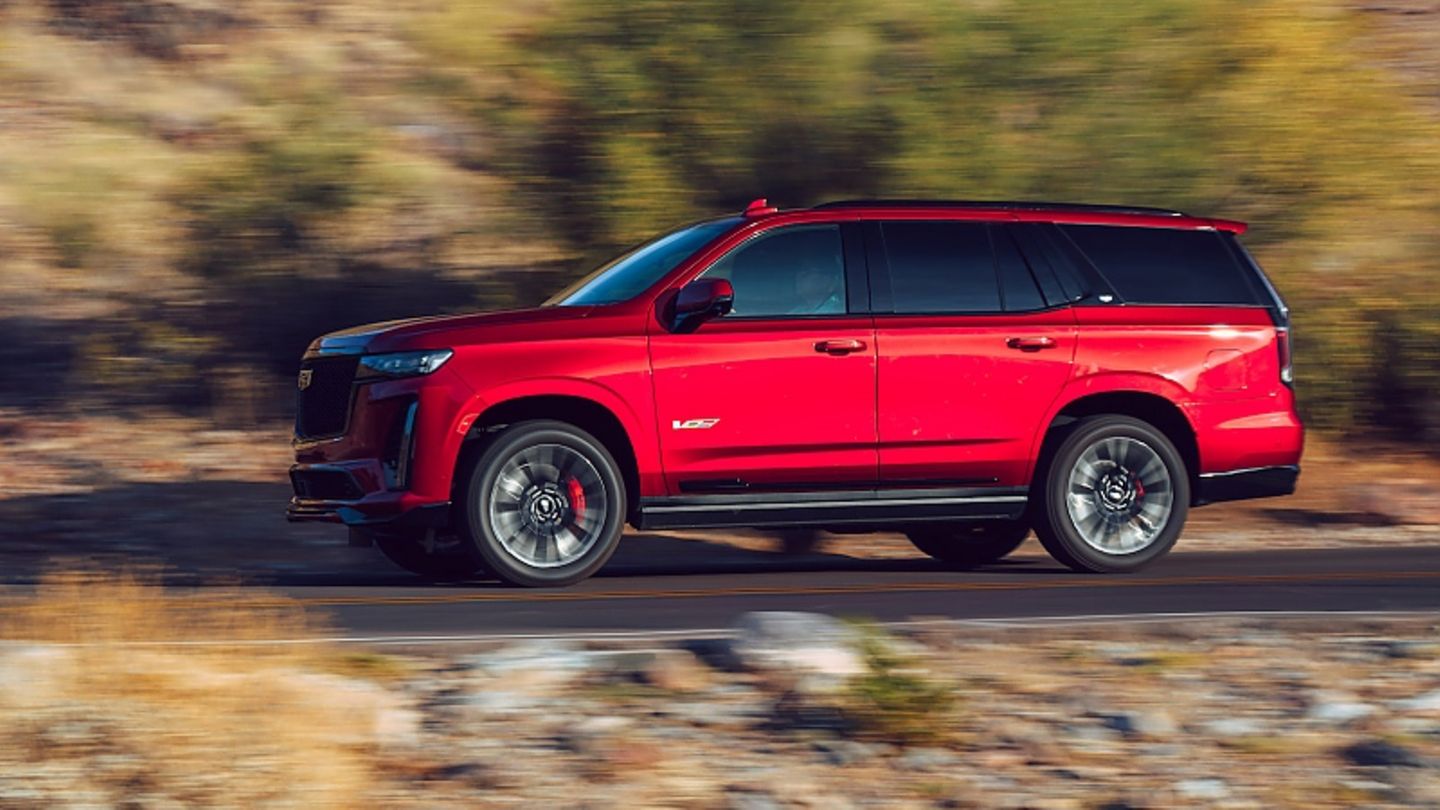 Cadillac will be fully committed to the electric drive in the coming years. But until the time comes and the noble offshoot of General Motors sends its models alone on Electric Avenue, it celebrates the phased-out combustion engines again. One like the Cadillac Escalade V does not exist again, especially as a long version ESV.

Cadillac has caused quite a stir in the premium league in recent months with its two new electric models, the Lyriq and Celestiq. Those who are not yet completely enthusiastic about the electric models of the near future can indulge in a real SUV legend. The Escalade puts on a radiant crown with the sporty V version. You never want to get off again, especially on long journeys. The competitors of the Cadillac Escalade are few and far between on the US market. “Of course there’s a BMW X7, Range Rover or a Mercedes GLS, but actually we’re looking more at a Lincoln Navigator,” says product manager Jordan Garwood, “the other models are significantly smaller and also cater to a different audience because it there is no longer wheelbase version. Our quantities are then completely different.”

The Cadillac Escalade has a sound like thunder, especially in the USA, but also in the United Arab Emirates or Russia. It’s the luxury model that the US President drives around in when “The Beast” stays in the garage. The Escalade is huge – especially as a 5.76 meter long XXL version with six individual seats, which could not be more luxurious in a Learjet. “We have a sales mix of 70:30 in favor of the regular version,” continues Jordan Garwood, “however, many people want the ESV long version for maximum luxury. We couldn’t do without it.” And it is precisely this XXL variant that is also available in the sports version of the Cadillac Escalade V. Especially in black, the ESV is a powerful part of luxury SUVs and yet it can hardly be denied a certain elegance. The luxury inside is gigantic with the gigantic 38-inch display, air-conditioned individual leather seats, separate air-conditioning, plenty of space and rear entertainment with two 12.6-inch touch screens and premium AKG sound from 36 loudspeakers. Long gone are the days when you could blame the finest GM brand for a mediocre build quality. Especially as a V-Sport version, the Escalade is also a show in terms of leather interior and operation.

This applies more than ever to the drive, because just like the competition, a supercharged eight-cylinder works. Cadillac uses the well-known 6.2-liter V8 in the sportiest of all Escalades, thus underscoring the predict that displacement, even supercharged, cannot be replaced by anything at all. This free-breathing eight-cylinder takes a lot of air at the driver’s request and with its 508 kW / 682 hp powerfully presses you into the seats. Despite its gigantic number of shift stages, the in-house ten-speed automatic can hardly keep up with the shifting when the US colossus sprints from a standing start to 100 km/h in around 4.5 seconds, while the driver sprints onto the gigantic screen or the head -Tracked up display. If the normal enthusiasm of the eight-cylinder is not enough for you, you can press the comparatively inconspicuous V switch in front of the somewhat pale gear selector lever and the colossus puts on its ears. On the gigantic 16:9 screen, various settings for chassis, steering, transmission and other modes play a central role. Depending on your taste and the road, you can adjust the V modes here and make the combustion colossus as sporty as you want it to be. The V8 engine is also a real show in the particularly powerful 682 hp variant. Acceleration is fierce thanks to the 885 Nm of maximum torque, even if you don’t lose your facial features like some hypercars. In addition, the driver enjoys the beguiling sound of the eighth-ended car pounding out of the four tailpipes into the surroundings. You will miss something like that in electric cars with their artificial tinkering sound – here you will find sonorous power acoustics at its finest.

With its massive dimensions, the Cadillac Escalade V ESV is one of the fastest and most powerful condominiums imaginable. However, there is a problem with the top speed, because the 155 miles per hour (250 km/h), which the Americans let many of their V-top models run in the USA, does not exist with the US version. According to Jordan Garwood, this is currently limited to a narrow 200 km/h. That would be far too little in the league of a 700 hp power SUV in Europe or the Emirates. The export models should therefore have a much longer leash – also because the Escalade V is equipped with a high-performance brake system from Brembo, which, however, could do its job a bit more aggressively on the powerful 22-inch wheels.

Travel comfort is more important to most customers in the USA anyway, because even if it is a sporty colossus, the equipment and long-distance qualities should leave nothing to be desired. The chassis tuning is firm and not harsh – for a crossover weighing almost 2.8 tons, whose electronic dampers have their hands full on bumpy roads or in fast corners, it has always been successful in keeping the pitching and rolling movements within limits. The space is just as plentiful as the load compartment and the extended ESV variant with its 4,043 liters with the seats folded down in rows two and three puts even many vans on the sidelines. The fact that not only the tailgate opens electrically, but also the long steps unfold electrically and the doors close as if by magic, fits into the excellent image of the Escalade V ESV. Such a one would also find its fans in Europe, who would be only too happy to pay the minimum of 150,000 US dollars. And the XXL version, including an unmanageably large number of security systems, costs 3,000 US dollars more – that too is America.