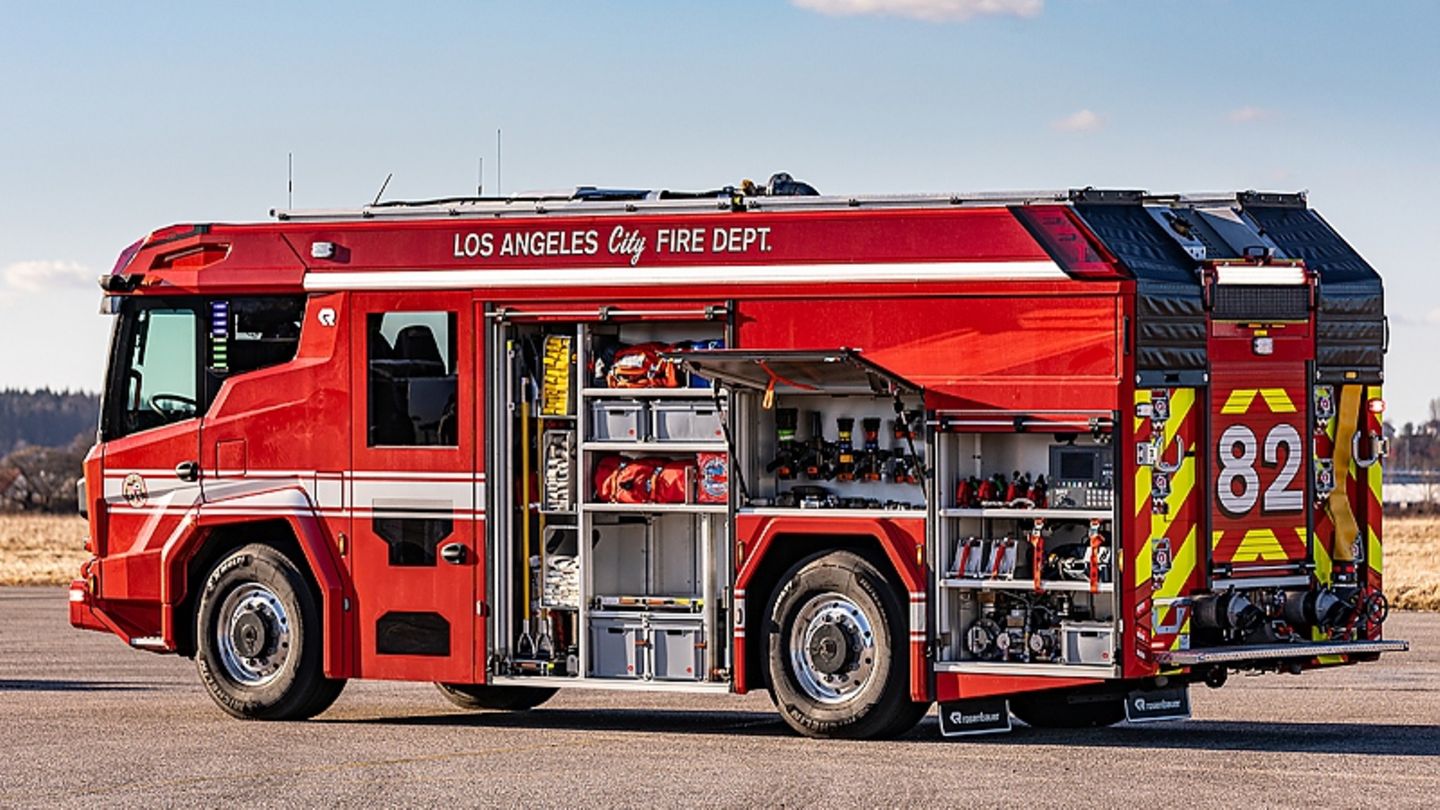 In the fire service, everyday life is often a matter of life or death. Speed ​​is everything, and the right equipment will determine the consequences of the fire. When it comes to fire fighting vehicles, the Austrian specialist manufacturer Rosenbauer has been the world number one for many years. More and more electric vehicles are also being used for fire engines.

When there’s a fire in the Hollywood Hills north of Los Angeles, it’s possible that one of the fire engines rushes towards the seat of the fire with a deafening noise, but the engine can hardly be heard. Instead of a high-torque diesel engine, the Rosenbauer RTX, which the company developed specifically for the Los Angeles Fire Department, is powered by two electric motors. The fire vehicle was created after more than ten years of development work and now the Rosenbauer RTX is in service. Firestation 82 on Hollywood Boulevard is a location with a strong image. Richard Fields, Assistant Chief Los Angeles City Fire Department: “We were at the Rosenbauer Group headquarters in Austria at the beginning of February for the acceptance of our vehicle and had the opportunity to get to know it better, to drive it and to test all functions. We were particularly impressed by the driving characteristics and driving comfort of the RTX, but the operating and control concept is also absolutely state-of-the-art. A vehicle that we will certainly enjoy, that has everything we need for our routine operations and with which we are also making a contribution to climate protection.”

The 8.25 meter long Rosenbauer RTX is powered by two electric motors with a maximum output of 2 x 180 kW / 245 hp. 130 kW / 181 hp are available as continuous power on each axle of the all-wheel drive vehicle. The two power packs are supplied with energy from two high-voltage batteries with a capacity of 132 kWh, which also provide the energy for pump operation and other consumers at the site. In addition, the RTX has a diesel engine with a power generator as a range extender that has an output of 225 kW / 306 hp, which is largely invisibly installed in the body. This turns the RTX into a mobile power station that automatically recharges the high-voltage batteries when more energy is consumed than is stored in them. In addition to the large battery module, the RT / RTX series models are also available with a 66 kWh battery pack.

The developers of the Rosenbauer RTX put a lot of work into the handling. The fire-fighting vehicle runs on a low-floor chassis with a tubular core frame, in which one of the two high-voltage batteries is invisibly installed, resulting in a much lower center of gravity than fire-fighting vehicles on truck chassis. Independent wheel suspension and a switchable rear axle steering ensure greater maneuverability in narrow streets and at the push of a button, the RTX can even move diagonally forwards or backwards like a crab, which significantly increases maneuverability. The air suspension allows the driving level to be adjusted to the ground, as the driver can switch between on-road and off-road driving, watt and deployment mode. At the site of operation, the vehicle can be lowered using the air-sprung chassis so that the driver and crew can enter without barriers and the equipment can be removed particularly easily.

All of the vehicle’s functions, from the lighting to the extinguishing technology, can be controlled via a 17-inch display installed centrally in the dashboard. In addition, the vehicle sets up its own W-LAN, which can be used to wirelessly control robots, drones and other electrical equipment. “We are pleased that we were able to develop the RTX for America together with the Los Angeles City Fire Department and that it will soon be able to demonstrate its capabilities in everyday fire service work,” says Andreas Zeller from Rosenbauer sales, because many other US fire service organizations that have already shown interest in the vehicle are currently looking forward to LA and want to take the first practical experiences with the RTX into account when making their purchase decisions.”

But not only in Los Angeles, California, the fireworks are electric; The professional fire brigade of the Canton of Basel-Stadt also recently ordered four fully electric fire-fighting vehicles from the Revolutionary Technology / RT model series from Rosenbauer. The Swiss fire helpers can handle over 90 percent of all operations purely battery-electric without generating electricity through the range extender. The Basel-Stadt professional fire brigade has around 100 employees and has recently been called out more than 2,900 times a year. “The first fleet order for a new product is always something very special. It was a Swiss airport fire brigade that put the first Panther into service 30 years ago, and with which we defined a new vehicle category,” says Rosenbauer board member Dieter Siegel Basel city. It is therefore one of the first users of this trend-setting technology, which we want to transfer to other vehicle types in the future.”

The Rosenbauer Group has set itself the goal of offering at least one vehicle with an electric drive in each vehicle category by 2023. The group of companies relies on the one hand on appropriate superstructures for electric chassis such as the Volvo FL Electric and on the other hand on its own developments. Rosenbauer estimates that the global market volume for the RT and comparable technologies alone will be around 3,200 vehicles by 2030; in Europe, 700 to 800 such vehicles could already be in use by 2025.