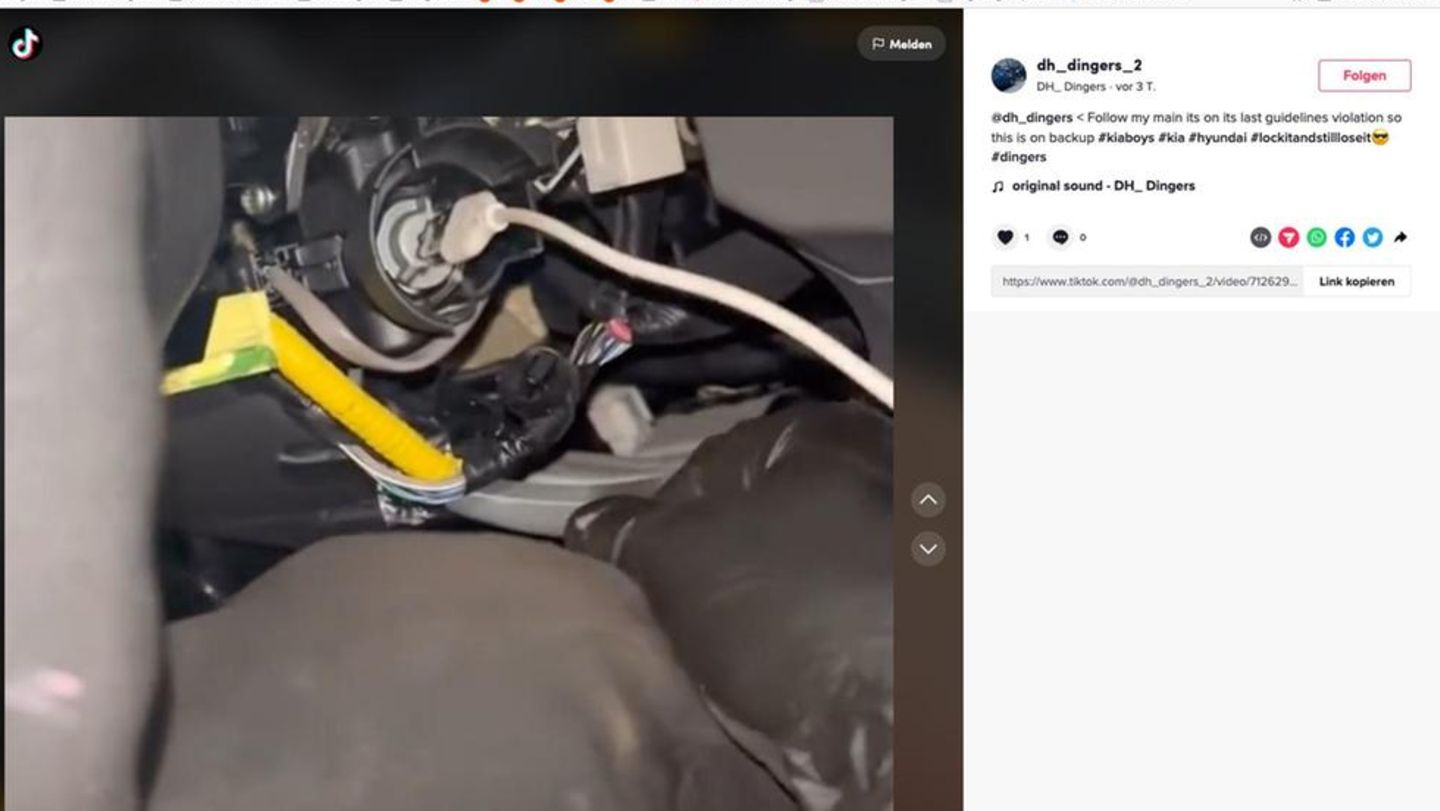 In the USA, owners of Kia and Hyundai vehicles have to fear for their cars: A viral Tiktok trend shows how easy it is to steal the vehicles – and finds numerous imitators.

Whether it’s called the “Kia Challenge” or “Kia Boys” shouldn’t really matter to the owners of Kia and Hyundai vehicles – the fact is that there is a trend in the USA that mostly involves young men doing sport to steal models from the manufacturers mentioned – because it is so easy.

In a video by Youtuber “Tommy G” the whole extent becomes clear, because it not only shows exemplary scenes of what happens to the cars after the successful theft, but also the thieves’ method. With some vehicles built up to and including 2021, it is probably sufficient to remove parts of the panel behind the steering wheel with a screwdriver and then plug a USB cable into a protruding pin.

According to another explanatory video by Tiktok user dh_dingers, this allows the vehicle to be started without warning lights or restrictions. After that, as many videos and reports show, the vehicles are driven until the frenzy causes an accident. Apparently, scrapping the cars is also part of the “challenge”.

23 of 56 stolen vehicles fell victim to the “Challenge”.

The questionable trend apparently originated in Milwaukee, Wisconsin. There, the state was already considering at the end of 2021 whether Kia could be prosecuted for the many thefts, procedures and investigations, reports “Carbuzz”. The so-called “Kia Challenge” now seems to be a national phenomenon in the United States. Just a few days ago, the police in St. Petersburg, Florida, warned owners of a Kia or Hyundai to secure the vehicles well. Since mid-July, 23 of 56 stolen vehicles have been attributed to the two brands.

As a result of the spread on Tiktok, it seems that minors in particular are becoming the perpetrators. This was also the case with an arrest in Volusia County, as reported by the “Daytona Beach New Journal”. There, three young people between the ages of 14 and 17 were caught stealing a Kia Soul. They said they saw the instructions online. Only a day earlier, a Kia Optima with a broken window was found – without a perpetrator.

Problem: The immobilizer is missing

Kia and Hyundai are aware of the problem in the US. The Volusia Sheriff’s Office released two statements from the automakers on Facebook. Kia stated, “Kia America is aware of the rise in vehicle theft among a subset of trim line vehicles in your region. Beginning with the current 2022 model year, all Kia vehicles come standard with an immobilizer.” Hyundai wrote, “Hyundai Motor America is concerned about the rise in auto theft in the region. The safety and well-being of our customers and community is and will remain our top priority. These vehicles meet or exceed Federal Motor Vehicle Safety Standards, and include immobilizers standard on all new Hyundai vehicles.”

And that’s probably the problem – as well as the good news for Germany. Because the technology with the USB cable works because some vehicles do not have an immobilizer installed that would prevent the car from starting so easily. In Germany, all newly registered vehicles have had to be equipped with such a safety device since January 1, 1998; the first models were available in the early 1990s.

In the USA, on the other hand, the income from the sale of steering wheel claws is rising sharply, with many media recommending the use of such a lock for “desirable” vehicles.