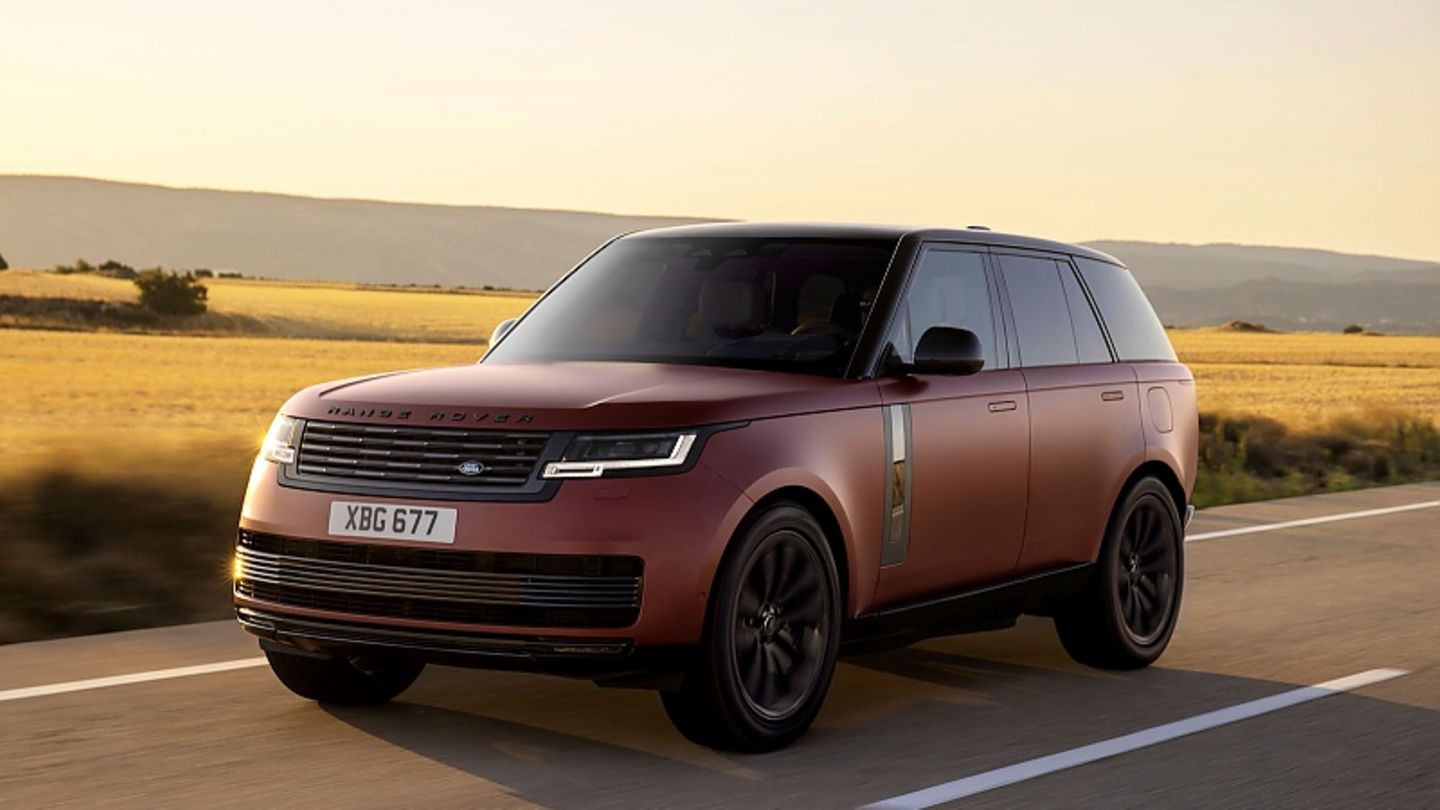 Land Rover’s flagship enters the fifth generation. The British are now treating their top model Range Rover not only to lavish luxury, but also to a partially electric drive.

Even the price list shows where Range Rover sees itself: around 230,000 euros are due for the newly developed top model with a V8 engine and already lavish basic equipment. With even more luxury on board, the 270,000 euro mark can easily be broken. The Brits from Solihull are thus advancing into regions in which Bentley with the Bentayga (from 210,000 euros) and Rolls Royce with the Cullinan (from 315,000 euros) cavort. Range Rover is a luxury brand – not only because of the steep prices.

In the new plug-in hybrid Range Rover P510e you are a bit more modest. It starts at 154,500 euros and now also heralds the electric age in the top model from Land Rover, after the engine first proved itself in the Defender. Incidentally, it also fights against the image of a fuel-guzzling climate killer: Thanks to the hybrid that can be charged at the socket, which achieves a purely electric range of up to 80 kilometers in real terms, the already empty colossus, which weighs over 2.8 tons, is content with a combined one Consumption of 0.9 liters Super per 100 kilometers. This corresponds to CO2 emissions of 21 g/km. So, at least with this Range Rover, the high consumption can no longer be an argument for the anti-SUV faction. From 2024 there will even be a fully electrically powered version of the Range Rover.

The situation is different when it comes to the bulky dimensions of the luxury British: it hasn’t gotten any smaller. At least 5,052 mm long, 2,209 mm wide with the side mirrors folded out and 1,870 mm high are still a statement and a challenge in many a parking lot. Thanks to the new MLA Flex platform, the Range Rover is also available as an extended version with a length of 5,252 mm and optionally up to seven seats for hardcore parkers.

On the street, however, you don’t notice the bull’s size or weight – it’s agile, even weaving through narrow streets. Its all-wheel steering also helps it to do this. The turning circle is less than eleven meters – and thus on the level of a VW Golf 8. The air-sprung chassis absorbs every unpleasant jolting, even on bad roads. When tuning the suspension, the system also uses the data from the navigation system to predict the optimal setting. Tendency to roll in curves? As good as non-existent. Especially not if you order the “Dynamic Response Pro” system. It can be so comfortable if you trick the physics. Understeer or oversteer, spinning wheels? Since the ESP before. When driving: absolute silence inside. The Range Rover is acoustically perfectly shielded, in electric mode anyway, but even when the combustion engine is involved, you can hardly hear it. Wind and road noise? um Perfectly filtered out – after all, you want to enjoy the sound of the 43 loudspeakers.

The hybrid engine is a perfect match. Together, the 3-liter six-cylinder and the electric motor deliver 375 kW / 510 hp and a maximum torque of 550 Nm to all four wheels. Acceleration from 0 to 100 km/h in just 5.5 seconds and a top speed of 242 km/h (purely electric: 140 km/h) make driving confident and safe. After all, up to almost 3.5 tons want to be moved. The 8-speed automatic from ZF shifts smoothly, cleanly and calmly through the scenery. And when the drive changes from electric to combustion mode, it happens imperceptibly.

Pure luxury inside. Comfortable and solid seats, fine materials, excellent workmanship, plenty of space on all seats. The 13.7-inch display in front of the driver is configurable in terms of information, everything is clear and easy to read. In the center of the dashboard is the central 13.1-inch flat screen, on which the car and the off-road system can be configured, as well as the sound system and the new Pivi Pro infotainment system. Everything is based on simple, configurable tiles. Fortunately, key functions can still be operated separately using buttons and switches – such as the air conditioning. Heated seats, USB-C charging sockets and cup holders are also standard at the rear. As before, the two-part tailgate on the newly styled rear of the Range Rover ensures that it can be easily loaded. 818 liters fit behind the second row of seats – you can start with that.

One hardly dares to move the exclusive vehicle off-road into rough terrain. Rockfalls, branches scratching the paintwork, mud creeping into every pore, extreme torsional forces – mental horror. But the Range Rover is – a Land Rover. And built for these extremes. The ground clearance with the air suspension raised in off-road mode is up to 295 millimetres, the approach angle is then 32.1 degrees at the front and 29 degrees at the rear. If the stream is up to 90 centimeters deep, the Range Rover has no problem with that either. And the sheer endless number of off-road programs and auxiliary systems, right down to the cameras pointing downwards on both sides, ensure that the colossus can climb and get through almost anywhere.