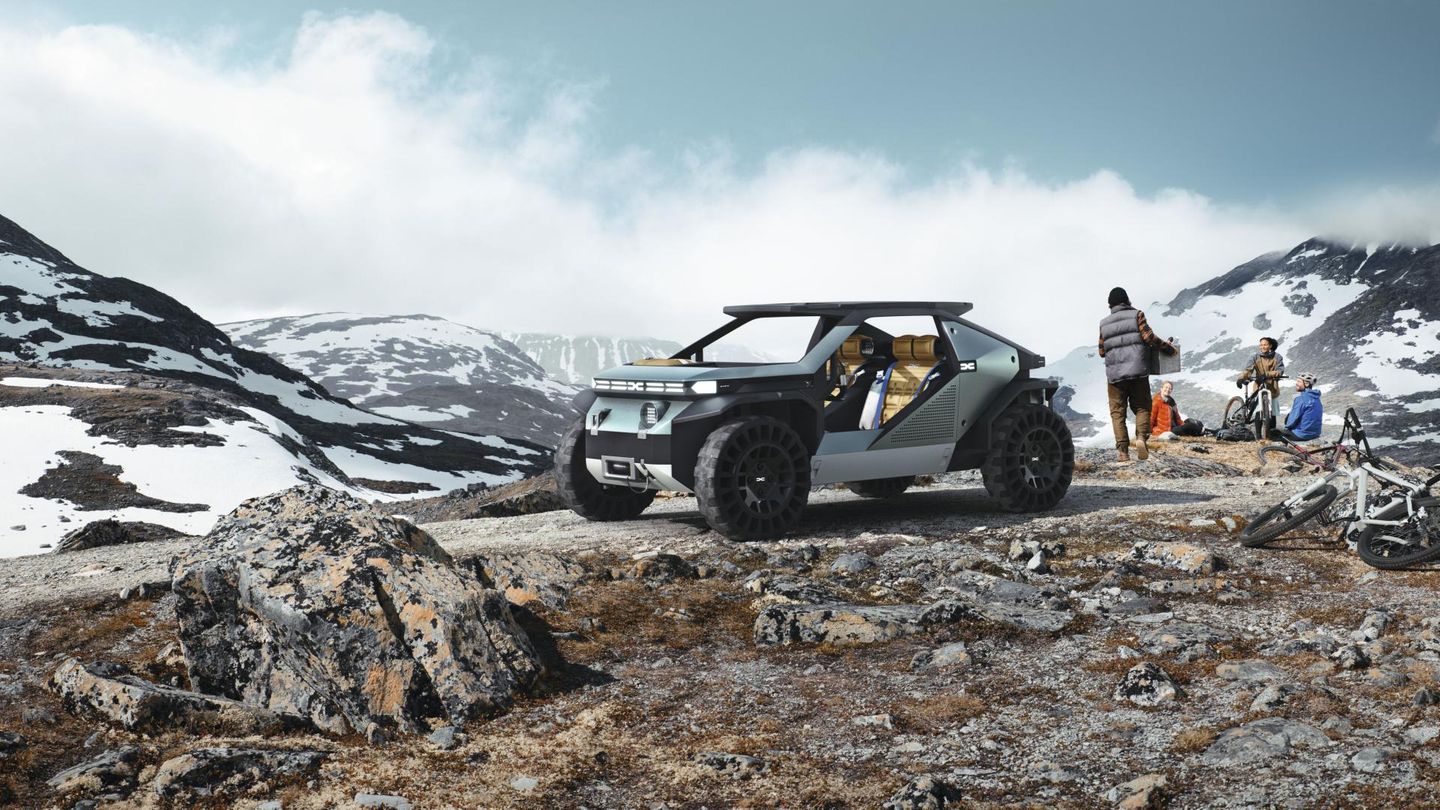 A headlight that becomes a flashlight, seat covers that turn into sleeping bags, a waterproof interior and puncture-proof tires – with the Manifesto Concept Car, Dacia has shown a car that is intended to be a practical vehicle for every purpose.

With the Dacia Manifesto Concept Car, the Romanian car manufacturer is showing a vehicle that is more than just a classic car. The all-wheel drive vehicle should by no means only drive on the road, but can also be used off the road. It “accompanies its users in their various outdoor activities,” it said when the study was presented last Friday.

In this way, the tailgate can be used multifunctionally – as a work surface, for example. Instead of two headlights, the Manifesto has a solo lighting unit, which can be removed and used as a flashlight if necessary. The concept vehicle also has a removable battery with a household socket, which is intended to become a mobile power source.

The interior is water-resistant, so the entire interior can be cleaned with a water hose, according to the manufacturer. If you want to use the vehicle for camping, you can remove the seat covers and convert them into sleeping bags in just a few seconds. As is common nowadays, a smartphone can be linked to the on-board computer. In addition, the vehicle has a system that allows the attachment of modular accessories.

The bars of the roof rack can be changed to different configurations, so that different loads, such as luggage, can be transported. The roof rack is already available in a similar way for the crossover Sandero Stepway and Van Jogger and will also be available for the Duster in the future.

The Manifesto should be able to be used “even more consistently” as an outdoor vehicle than the Duster, Jogger and Sandero Stepway. A high ground clearance, large wheels and a body “which withstands even the most demanding terrain” should help.

With the concept vehicle, Dacia wants to have developed a model that is as climate-friendly as possible. It does without doors, windows and windshield and is said to be around 300 kilograms lighter than its competitors. The Manifesto is intended to aim for “the smallest possible ecological footprint”. The body, which according to the manufacturer consists largely of recycled plastics, should also contribute to this. In addition, the Manifesto uses so-called airless tires, which are said to be puncture-proof and designed for a long service life. They should not only protect the environment, but also your wallet. In addition, the dashboard is made of cork while the vehicle does without chrome-plated trim elements.

Dacia is working on its image

Dacia does not give details of the engine, dimensions and prices. This is probably due to the fact that the concept vehicle should not come onto the market. Rather, the study is intended to provide an insight into future model ranges. Dacia Design Director David Durand says in a press release: “[…] The Manifesto Concept Car is more than a design object, it also embodies our vision and brings together a wide range of innovations. Some of these are extreme, but still affordable for customers. We will use some of them in future Dacia models.” Lionel Jaillet, Dacia Product Performance Director, adds: “[…] The Manifesto Concept Car is a ‘laboratory’ where we try and test new ideas. The current version will continue to evolve.”

Dacia produces inexpensive vehicles and for this reason it has a reputation as a cheap car manufacturer. The Renault Group member is therefore now working on its image and is aiming for a “more pleasant brand experience”. Dacia CEO Denis Le Vot presented a modified brand profile in Paris last Friday. In recent months, Dacia has already developed a new brand identity, logo, design and colors. In addition to the increasing use of recycling materials, the car manufacturer has announced the expansion of all-wheel drive systems for the coming year. In addition, a kit is to be launched that will allow a double bed to be set up in the jogger in just a few minutes.