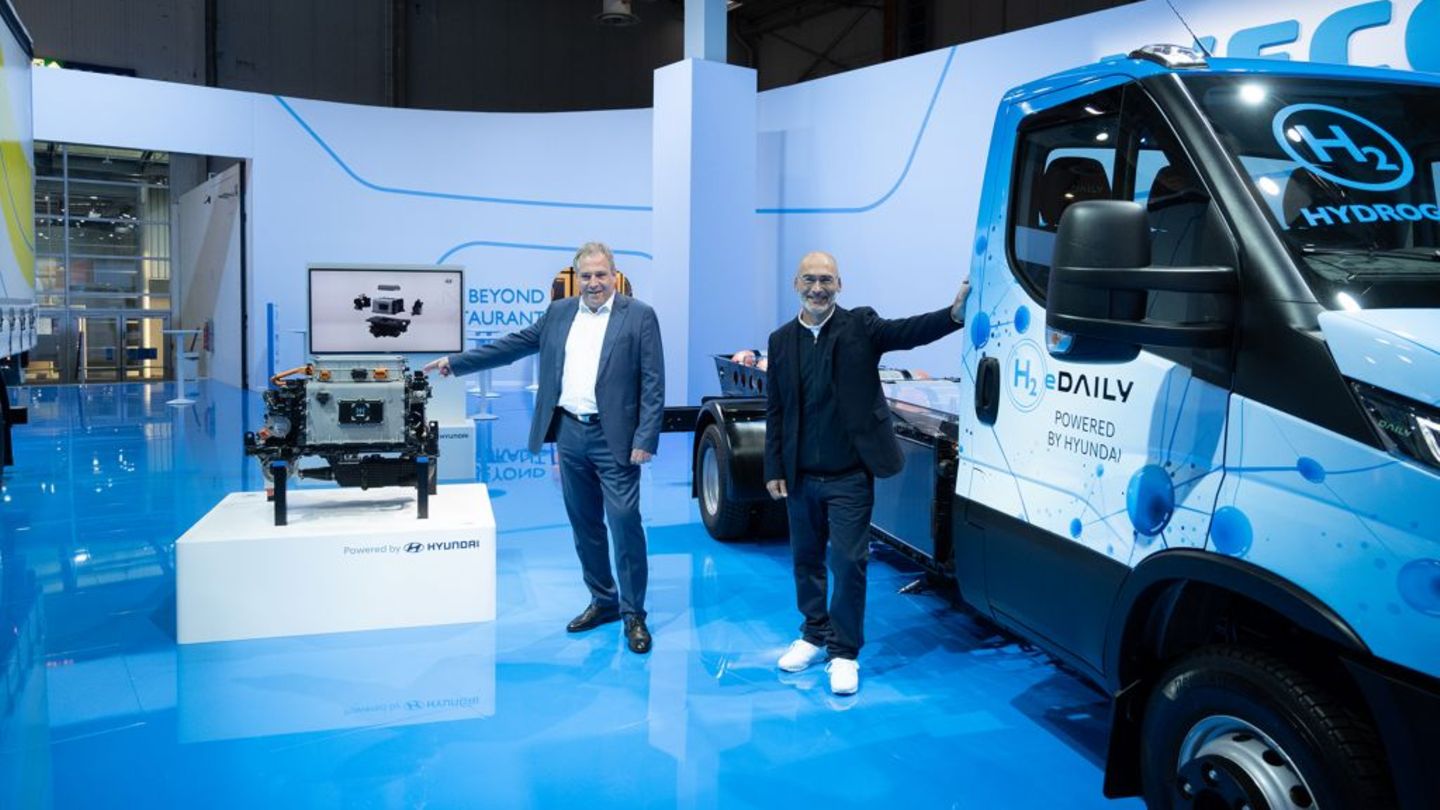 The hydrogen fuel cell drive is back on everyone’s lips. Numerous manufacturers are currently presenting vehicles with this technology. Hyundai and Iveco have presented a hydrogen transporter that is supposed to represent “the future potential”.

In the automotive sector, the fuel cell is no longer a big issue – the situation is different in payload traffic. At the commercial vehicle trade fair IAA Transportation in Hanover, various manufacturers are currently showing new vehicles with alternative drives. The Korean carmaker Hyundai and the manufacturer Iveco on Monday presented a prototype of their first transporter with hydrogen fuel cell technology, the Iveco eDaily FCEV, with a payload of three tons.

The vehicle is equipped with a 90 kW hydrogen fuel cell system and a 140 kW electric motor. According to the manufacturer, six tanks have a storage capacity of 12 kilograms of hydrogen and can be filled up within 15 minutes. The transporter is said to have a maximum range of 350 kilometers, which was confirmed in a test run in Europe. The technology has covered more than 4.5 million kilometers in heavy trucks in Switzerland.

Hyundai and Iveco present vans as “the ideal option for deliveries”.

The hydrogen transporter is the “ideal option for deliveries” over long distances and high payloads, according to a press release. The new model is said to “represent the future potential of Iveco’s best-selling and longest-running large van.” In addition to conventional models, its product range also includes methane/biomethane drives and electric drives. In addition to the hydrogen transporter, the two companies also presented the eDaily BEV at the IAA Transportation, a transporter with an electric drive, which is best suited for regional use.

Marco Liccardo, Chief Technology and Digital Officer at Iveco Group, spoke of a “significant milestone” and announced that he intended to launch a small series of hydrogen transporters by the end of next year. “[…] The hydrogen-powered eDaily [ist] another concrete example of what we can achieve by working together to accelerate the transition to locally zero-emission transport. The partnership between the two companies has proven to be very successful and we expect even more far-reaching results in the coming years,” said Martin Zeilinger, Head of Commercial Vehicle Development Tech Unit at Hyundai Motor Company.

In 2020, Hyundai launched its first hydrogen truck, the Xcient Fuel Cell. Last August, the Korean manufacturer announced the delivery of the first vehicles to German customers. Seven companies should therefore include the hydrogen truck in their fleet.

Hyundai and Iveco signed a memorandum of understanding in the spring. From this point of view, the two manufacturers have set up “several joint working groups for different technological areas”. Both companies want to investigate “how they can complement each other in the development of electric vehicles and alternative drives.” As a result, they announced the production of hydrogen buses in early July. The built-in fuel cell technology comes from Hyundai.

Iveco also develops trucks with alternative drive technology in cooperation with the US manufacturer Nikola Motor at the joint plant in Ulm. The two companies signed a memorandum of understanding in September 2021. Nikola President Michael Lohscheller spoke to him a few days ago star about the truck manufacturer’s ambitious plans.

Other manufacturers have also made it their task to develop commercial vehicles with hydrogen fuel cell technology. The automotive supplier Bosch announced last week that it had converted two all-electric vans into hydrogen vehicles. To do this, the batteries were replaced by fuel cells and hydrogen storage tanks. The two vehicles are in test operation on the road. The company is showing the test vehicles at the IAA Transportation.

Opel has been producing the Vivaro-e, a small electric van with hydrogen fuel cell technology, since the end of 2021. The panel van has a range of over 400 kilometers. Peugeot and Citroen, which – like Opel – both belong to Stellantis, use the same technology with the e-Expert and e-Jumpy. The group builds the fuel cells in cooperation with the tire manufacturer Michelin and the supplier Faurecia. Renault also intends to launch a panel van with hydrogen fuel cell technology next year with the Master.

The vehicle manufacturer MAN, on the other hand, is even more cautious when it comes to the series production of fuel cell trucks in large numbers. Alexander Vlaskamp, ​​head of the company, said that the focus will initially be on the production of electric trucks.

Sources: Hyundai, , , with material from the dpa