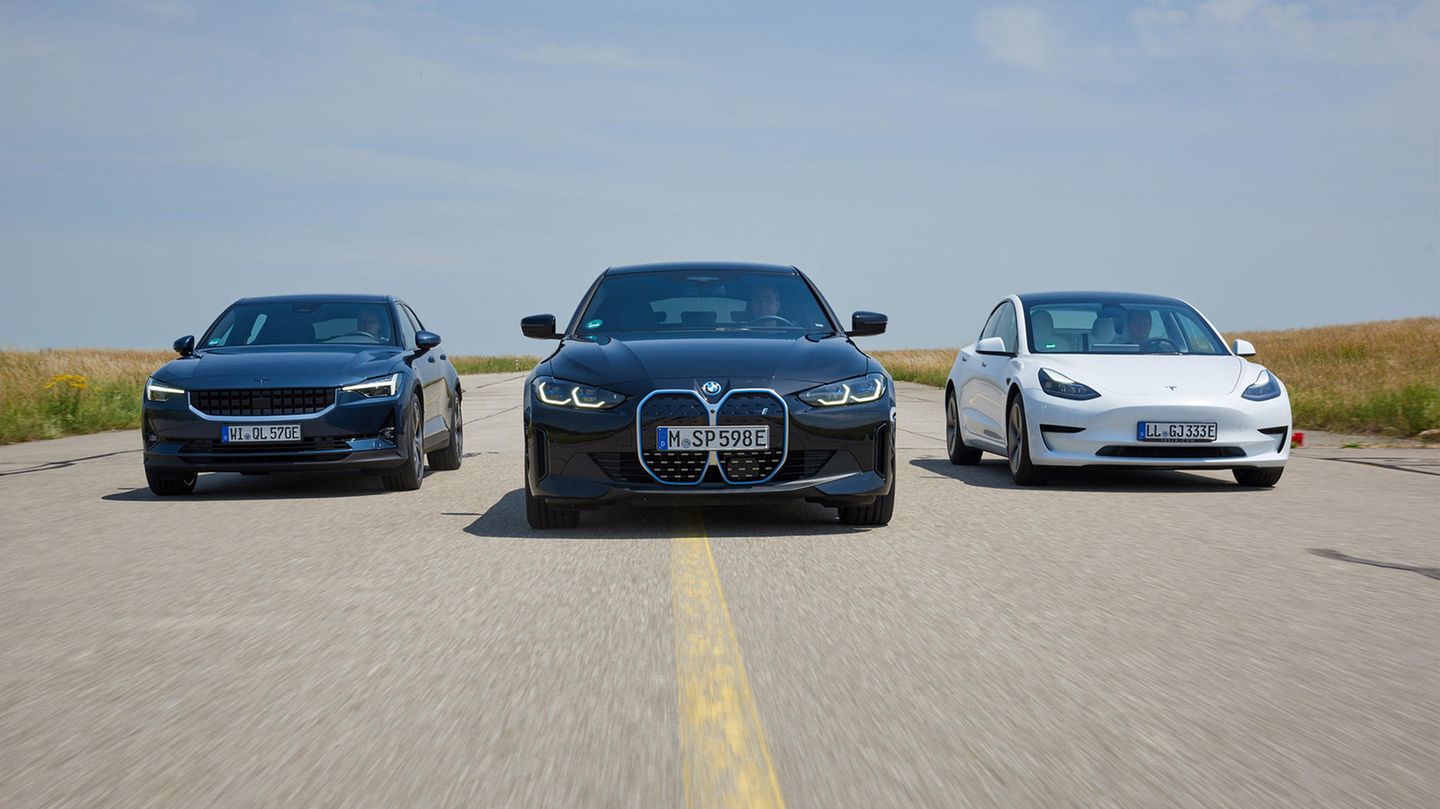 Range, safety, driving comfort – the ADAC tested the three electric models BMW i4, Polestar 2 and Tesla Model 3 for various properties. You can read here what the strengths and weaknesses of the individual vehicles are and which model has the best values ​​in comparison.

Tesla is considered the pioneer of electromobility. The vehicles of the US car manufacturer set the trend for a long time. But meanwhile BMW and Co. have caught up. In addition, competition from new electric car manufacturers such as Polestar is growing. An ADAC test shows which model performs well in which properties and which performs less well.

It is well known that the acceleration of electric cars is quite strong. All three tested models BMW i4 (340 hp), Tesla Model 3 (325 hp) and Polestar 2 (408 hp) sprinted forward without delay and with “ease” when stepping on the power pedal. With the three test models, overtaking a truck on the country road is an “entertaining and safe undertaking,” according to the ADAC. The automobile club measured around three seconds for acceleration from 60 to 100 km/h, with the Polestar leading the way with 2.5 seconds.

“Looked at soberly, the electric motors are in terms of Smooth running, performance development and controllability are miles superior to any combustion engine,” according to the ADAC. BMW, Tesla and Polestar all received the top mark of 1.0 in this category.

BMW i4 wins in suspension comfort, cockpits are not entirely convincing

In terms of suspension comfort, the BMW i4 was particularly convincing. The comfortable sports seats and the significantly lower interior noise also earned the four-door coupe additional points, while the Tesla Model 3 and the Polestar 2 are much tighter in comparison.

In return, the ADAC determined that both cars had “remarkably agile” handling. Compared to the i4, they were able to do an evasion test at higher speeds. The Model 3 achieved the best value thanks to its extremely directly translated steering. An additional advantage here: The vehicle from the US car manufacturer is around 350 kilograms lighter than the i4 and 400 kilograms lighter than the Polestar 2. The latter was the only test model to have all-wheel drive and therefore had the upper hand on slippery surfaces; the wheels were spinning at BMW and Tesla. If you shy away from it, you can also have the i4 or the Model 3 with all-wheel drive, but you have to go for the more powerful versions.

The space available is similar in all three vehicles. It gets tight on the back seat for occupants taller than 1.85 meters. The bulky center console and the high side line make the Polestar 2 look smaller, while the Model 3 seems much more spacious with large glass surfaces, a standard panoramic roof and a flat cockpit. The comparatively small trunk opening prevents loading with large objects. Another plus point: the Tesla model, like the Polestar with the front hood, has a second storage space, which the BMW lacks.

The i4 and Polestar 2 are slightly superior to the Model 3 in terms of vehicle control. Because both rely on an instrument cluster, while all functions of the Model 3 are controlled exclusively via the large touchscreen. This also applies to security-related features. BMW and Polestar have at least some buttons in the cockpit. On the BMW, the central display can be operated not only by touch but also with the controller on the center console.

All three tested models are allowed to pull a trailer. However, the Model 3 has a maximum towing capacity of 1 ton, while Polestar and BMW are allowed to tow 1.5 and 1.6 tons respectively.

Battery performance and range are of great importance in an electric car. And here the i4 is ahead. The four-door coupe has an 81 kWh battery with a low power consumption of 19.5 kWh per 100 kilometers, giving it a top value with a range of 490 kilometers. The Polestar 2 has a 75 kWh battery, but it consumes the most electricity of the three test models (22.3 kWh per 100 km). As a result, the sedan can still travel 395 kilometers on one battery charge. Although the Tesla Model 3 has a battery capacity of just 60 kWh, it only consumes 16.8 kWh per 100 kilometers. It thus achieves a range of 415 kilometers. The i4 also wins the charge speed race. The vehicle charges electricity for 370 kilometers in 30 minutes. The Tesla has a battery charge for 350 kilometers and the Polestar for 295 kilometers.

In return, Tesla scores with its route planning, which is the best developed in comparison, which integrates charging stops into the route. In addition to the public charging stations, Tesla drivers can also use the US carmaker’s own supercharger network. This currently consists of almost 900 fast charging points in Europe.

BMW just ahead of Tesla and Polestar

In the overall rating, the BMW i4 took first place by a narrow margin. The coupé model received an overall rating of 1.8, particularly because of its good driving comfort and long range. Tesla and Polestar came close behind with an overall score of 2.0. The “first-class efficiency” of the electric motor and the supercharger network speak in favor of the Model 3. However, the comparatively low driving comfort brought the vehicle losses. The ADAC also sees a high potential for distraction in concentrating on the central touch display and, as a result, an existing risk of accidents. The Polestar impressed with its strong engine performance, but did worse due to its high consumption. In a slimmed-down version (231 hp) with front-wheel drive, however, the sedan also had a range of 480 kilometers in the test. All three test models performed well overall. The conclusion of the ADAC: “Your own preferences are welcome to decide here.”

Turbo engine for the next pickup