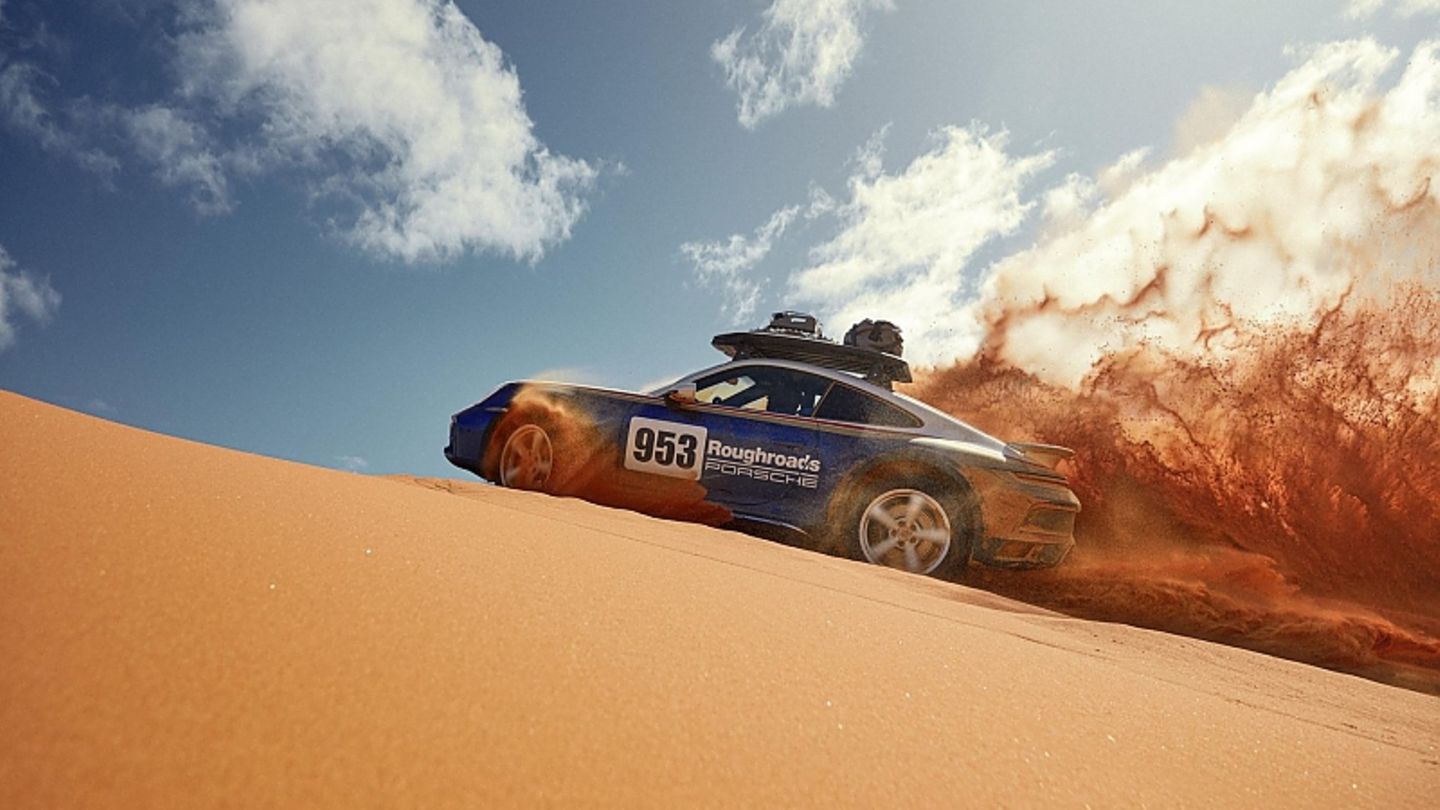 Porsche is once again reviving the tradition and launching a modern version of the Porsche 911 Dakar. The 911 on stilts should not only offer impressive driving performance on the road, but also off-road.

What just got into the sports car manufacturers? Lamborghini packs the Huracán on stilts with the Sterrato and now Porsche is following suit with the 911 Dakar. Well, the people from Zuffenhausen at least won the famous off-road chase from Paris to Dakar in 1984 in a jacked-up 911. Since the SUV boom is unbroken and fans of the sports car brand almost adore the Dakar 911, Porsche is now conjuring a new edition of the sports car crossover out of a hat. On request also with the right paintwork including a rally package for 26,061 euros. The customer can also choose between the digits 1 and 999 for the start number on the doors. Politically correct, of course: instead of “Rothmans Porsche”, the lettering “Roughroads Porsche” now adorns the flanks. “The 911 Dakar has the potential to become a legend, an icon,” says VW Group and Porsche CEO Oliver Blume.

In order to secure a modern Dakar 911, you have to be quick and have some change in your pocket. Only 2,500 copies will be built at a price of 222,020 euros. Anyone who thinks that you can only get a Porsche 911 Carrera 4 GTS with longer spring struts for this stately sum has made the calculation without the Zuffenhausen engineers. Of course, the ground clearance plays a decisive role, because the Dakar Porsche of the year 2022 should live up to its name. Basically, the body is five centimeters higher than the street 911 with sports suspension.

If the circumstances require it, a lift chassis lifts the body by a further three centimeters and thus achieves the level of a regular SUV in terms of ground clearance and ramp angle. However, the Kraxel mode is only active up to a speed of 170 km/h. If you go faster, the body lowers again and the Porsche 911 Dakar mutates into a crossover. It should be extremely dynamic. That’s how the Zuffenhausen company diction wants it. Stilts out, struts out. If you talk to those responsible at Porsche, they all rave about the dynamics of the new 911 derivative.

It starts with the heart of every 911, the drive train. As I said, it comes from the Porsche 911 Carrera 4 GTS. That means: 353 kW / 480 hp, 570 Newton meters of maximum torque, eight-speed dual-clutch transmission and all-wheel drive. This puts the rough and smooth 911 on the tarmac and completes the sprint from zero to 100 in 3.4 seconds. However, the all-terrain tires slow down the Dakar Porsche at 240 km/h. They are a Pirelli special development with nine millimeter deep lugs, reinforced flanks and two carcass layers under the treads.

The tires are real all-rounders. Because the Porsche 911 Dakar is made for speed cruising on sand dunes and drifting across gravel as well as for shining on the Nordschleife. “The 911 Dakar feels just as much at home off the beaten track as it does on country roads,” explains Frank Moser, head of the 911 and 718 series. To resolve this conflict of goals, the Porsche engineers have packed a number of dynamic-enhancing technology into the 911 crossover: The rear axle steering and the engine mounts come from the 911 GT 3 and the roll stabilization provides security. Typical Porsche agility is not possible with a two-tonne engine. The CFRP bonnet from the 911 GT 3 with the conspicuous nostrils, light windows, sports bucket seats, the missing rear seat and the fixed carbon composite help to reduce the weight of the off-road rocket to 1,605 kilograms. That is only ten kilograms more than the Porsche 911 Carrera 4 GTS with double clutch transmission. And that despite the stable roll bar in the vehicle.

With such conditions, life comes into the desert. Many of the Zuffenhausen off-road racers will probably end up there. With visible enthusiasm, Frank Moser tells of an “incredible driving experience” in the sand. To this end, the Porsche technicians worked intensively on two extra driving modes that can be activated with the small rotary wheel on the steering wheel and turn every handlebar into a mini Walter Röhrl. In the off-road program, the Dakar 911 with the maximum ground clearance automatically mutates into an SUV and you can climb every dune even in deep terrain. Rally mode lets the rear off the leash and is ideal on loose, uneven ground. Because with it you drift spectacularly over the gravel. The rally launch control, which can be switched on in these two settings, is spectacular. It allows wheel slip of 20 percent and thus impressive cavalier starts. The matching sound comes from the standard sports exhaust system.

Since even a high-tech off-roader like the Porsche 911 Dakar can get stuck, the Zuffenhausen-based company has attached a forged aluminum recovery eyelet to the front and rear. So that the appearance is also perfect, there is a 12-volt power connection on the roof for the additional headlights of the optional roof basket. Important rally paraphernalia such as canisters and folding spades fit into them. One can assume that this detail is ordered for almost every Dakar Porsche. There is a roof tent for glamping fans.