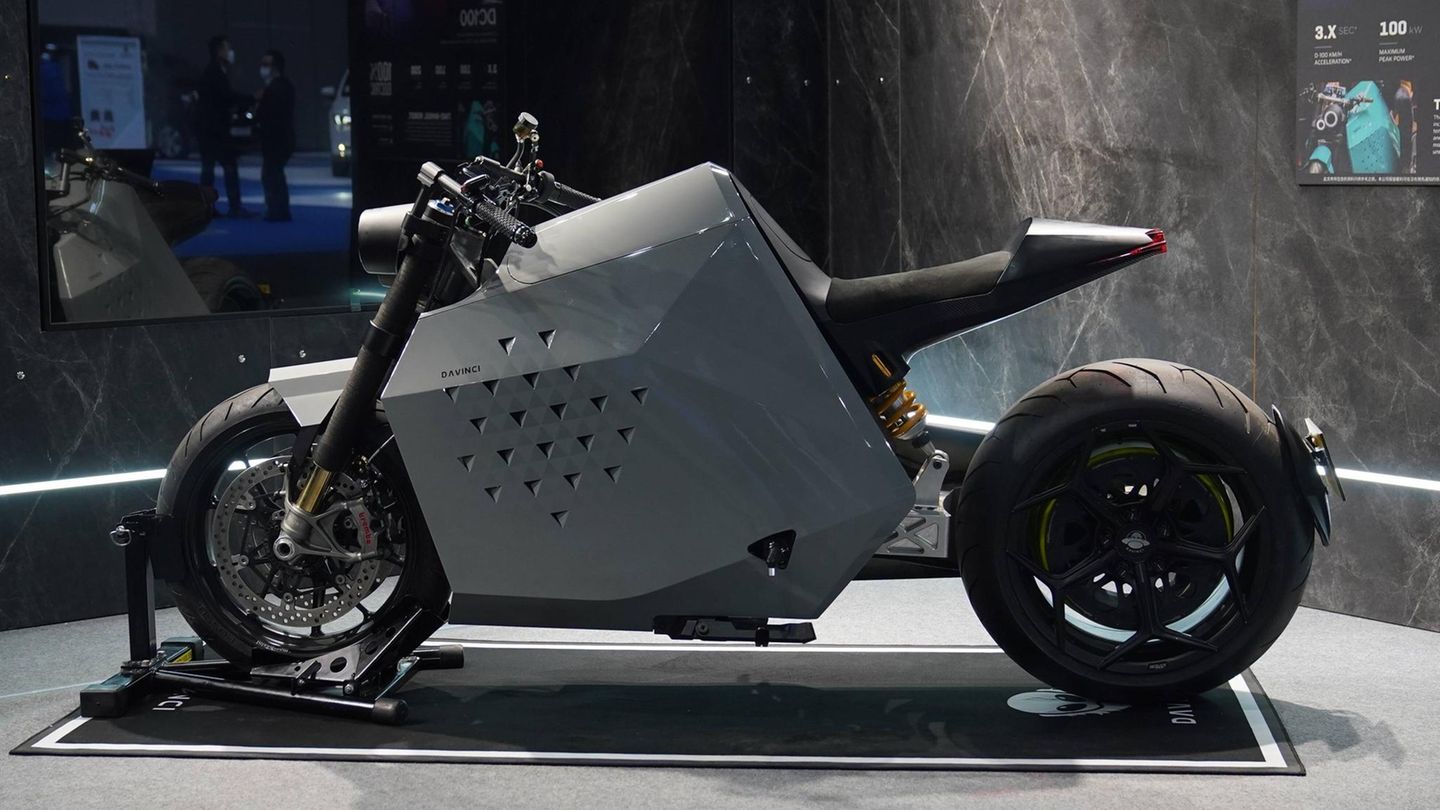 The Davinci DC100 is a high-tech machine on two wheels. With over 200 sensors, the all-electric “robot” motorcycle always keeps an eye on its surroundings. The 135 hp vehicle also has a range of over 350 kilometers.

In addition to the electric car manufacturers, more and more producers of electric motorcycles from China are coming to Europe. One of them is Davinci Motor. In cooperation with Tsinghua University in Beijing, the young company has developed what the Chinese call a “two-wheeled robot” full of high-tech. It is a motorcycle with more than 1000 built-in chips that “understands its surroundings”.

With the help of over 200 sensors, it collects information about the environment, the vehicle’s movement status, road conditions, battery and engine temperature and the lean angle, for example. The system should also be able to recognize the difference in speed between the front and rear wheels as well as the changes in friction of the rear wheel in order to prevent the two-wheeler from drifting. The many technologies should improve the driving experience and make driving safer.

Davinci DC100: Use in combination with a smartphone

Modern technology should also be used when starting and braking. The DC100 only has a brake lever on the right side of the handlebars and a rear wheel brake. If you let go of the brake lever and the forward gear is set, according to the vehicle description, the motorcycle automatically drives off with the help of a driving assistant – at a maximum speed of 7 km/h. This should “enable a smooth and stable start”. A hill start aid should be able to recognize the angle of inclination on an incline and drive off safely instead of the motorcycle rolling backwards. In the same way, the system should recognize the drop when driving downhill and automatically adjust the driving speed if the driver does not accelerate. If the driver engages reverse gear, the machine should also move off safely – at a maximum of 5 km/h.

If you suddenly have to brake and press the brake lever, the current is interrupted and the wheels are braked. Here, energy is recovered, which should increase the range and at the same time reduce the braking pressure.

The DC100 is used in combination with a smartphone, which is mounted on a phone holder provided on the handlebars. Here it should then serve as a driver’s display. Driving data, including the vehicle status, the current remaining range and location details, can be displayed on the smartphone via an app. In the future, the app will be expanded to include a function that will enable remote control of the two-wheeler. The driver should then be able to park his or her two-wheeler using a smartphone and call from afar.

The manufacturer promises a “high-performance” motorcycle with 135 hp and a torque of 850 Newton meters. It should accelerate from 0 to 100 km/h in under four seconds and be able to drive at a maximum speed of 200 km/h. Davinci specifies the range as up to 357 kilometers according to WLTP. The battery should be fully charged in around 30 minutes at a fast charging station. The battery capacity is not yet specified.

Davinci Motor, founded in 2013, presented the DC100 last week at the EICMA motorcycle show in Milan, thereby announcing its European market launch. “We are very pleased to officially enter the European market, which is strategic for Davinci,” said Rosanna Libia, Davinci Motor’s International Business Manager. Libia spoke of a “new era for electric mobility”. The electric motorcycle was already presented in China in July 2021.

This electric touring motorcycle has a range of over 400 kilometers

European customers can now reserve the DC100 for a fee. According to current information, the purchase price is a proud 26,000 euros. Anyone who has reserved the motorcycle should receive it between the second and third quarters of 2023. Davinci Motor is currently preparing the opening of its first European showroom, which will become the “central hub in Europe”.