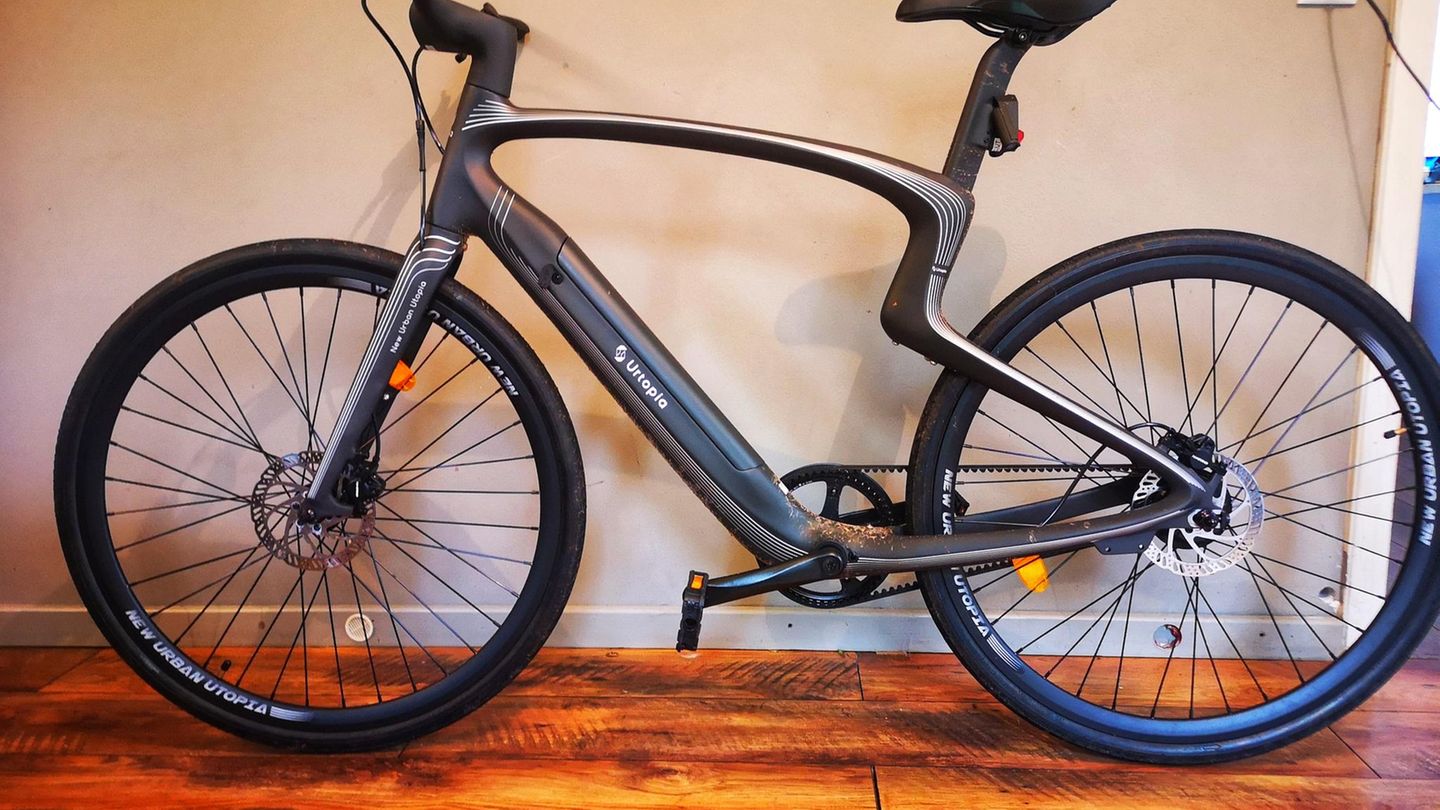 Lighter and smarter than the others – that’s the promise of the Urtopia. The e-bike with bike computer and carbon frame is 600 euros cheaper in Black Week.

An e-bike weighing only 15 kilograms – that’s a temptation. If you have to carry the bike up to the third floor anyway, or even if you are used to light bikes. Then the e-bikes with a plus of 20 kilograms feel like a tractor, even with a motor. The low weight is possible because the Urtopia has a full carbon frame and because a light drive and small battery have been chosen.

Carbon is not only lighter, it also has different properties than the usual aluminum. It feels warmer and softer, and unlike the super-stiff aluminum, it yields. In short, it is a special material and should be valued when ordering this bike. Because carbon is not cheap, the frame contributes to the price at a good price.

The bike’s strengths lie in two worlds: in the actual riding and in the advanced controls. First to ride: The bike comes in two sizes and should definitely fit perfectly. Only the saddle can be adjusted here, the handlebars merge into the frame in one part and can neither be adjusted nor exchanged. The riding position is far more comfortable than the futuristic curved frame would suggest. You sit in a discreet position on the bike, but still carry your head high enough to keep a good view of the road. The Urtopia has exactly one aisle and that’s enough. The motor compensates for the missing gears. The entry appears soft and elegant thanks to straps instead of the conventional chain. When moving, the wheel feels light and elegant – this is where the low weight is noticeable. Even with a powerful motor, a heavy bike has different handling than a light one.

The motor is located in the rear hub and delivers 35 Nm, the battery has a capacity of 350 Wh. These are not the values ​​of an eMTB, but in practice this is more than enough to quickly accelerate the bike and move effortlessly. In the mountains with high gradients, however, this set-up would be overtaxed. The tuning in relation to the permitted top speed of 25 km/h is very pleasant. You have to build up a certain cadence, the 25 feels “right” on the Urtopia – it’s not like you feel slowed down or hit a rubber wall when the motor’s support stops.

Bike for the urban space

The battery can be charged in the bike, but it can also be removed. This is an important feature when the pitch has no electricity connection. Even in a shared bike room, you can hardly lay the charger cables over other bikes to your own. Most designer bikes do not have a removable battery, the Urtopia does not. The 350 watt hours are enough for about 40 kilometers with proper support. In everyday life, the Urtopia is a nice, comfortable bike for the city. It is not designed to be too sporty and therefore very comfortable to drive. As mentioned, as with all design bikes, the adjustability is limited, so the bike has to fit the physique.

Additional useful accessories are available for the Urtopia. But that necessarily makes it heavier and also disrupts the streamlined shape. If we owned a bike like this, we would rather continue to optimize the lightweight construction instead of making the bike “fatter”. With other crank arms, pedals, brakes and tires you should be able to save another kilogram and more. The delivered Urtopia does not reach the level of a high-end carbon racer, especially with regard to the attachments, as some users on the Internet have complained about. But that’s no wonder, extreme lightweight construction of bikes leads to extreme prices. A carbon racer costs upwards of 6,500 euros – and that without a computer and electric drive.

Another special feature is the advanced electronic control of the wheel. The Urtopia is a computer that can also drive. But it has its own network receiver, the use of which has to be paid for annually when the term paid for with the purchase has expired. The driving fun begins when you start by pressing the fingerprint sensor on the handlebars. It feels pretty awesome when the wheel comes to life like this. The basic information is shown on the display in the center of the handlebars. The advanced functions can be called up via the app. In terms of functionality, the Urtopia is not inferior to other bike computers such as the Niox from Bosch. According to experience, some users use these functions intensively and others only rudimentarily. To put it simply: If you cycle in the neighborhood or to the office, you don’t need a navigation aid.

From the wealth of options, we only present those that everyone uses. The bike has GPS tracking and reacts with an alarm on the bike and on the smartphone if it is moved while it is parked. Such systems do not replace a lock, but make the bike much more secure. And you can track down the wheel if it ever disappears.

Another special feature is the lighting. The front lamp is integrated in the handlebars and is more than sufficient for urban areas. The backlight projects a spacer frame onto the ground. A turn signal can also be operated from the handlebars. Both bulbs are not noticeable in the blazing sunshine, but they give a clear signal in the dark and significantly increase the sense of security and visibility. Since an update, the wheel even warns of approaching cars with a humming in the handles. In our opinion, it works quite well, but not perfectly – but that can also be because we don’t have the same ideas of close-up as the machine. Either way, a useful feature. The Urtopia can also be ordered around using voice control. As you can imagine, voice control while driving and without a headset is a challenge in itself. When stationary and when you are not stopping on a main road, you can operate the complex functions without picking up your smartphone.

Driving the Urtopia is fun. The low weight leads to a pleasant lightness, which is matched by the unobtrusive help of the electric drive. The lack of gear shifting can be compensated for by more support when starting off. The bike is intended for urban use, but you can also handle a muddy path in the park. The carbon frame and the 15 kg weight make it easy to push, park, lift and carry the bike. That’s a completely different world than with other e-bikes – even if 15 kilograms aren’t as light as a feather, of course.

But the bike costs a regular full-size 3299 euros. That’s about as much as a good e-touring bike from a brand manufacturer. Ultimately, the price results from the carbon frame.

You should like carbon as a material and appreciate the lightness of action. You should also love and use at least some of the functions of the bike computer. If you appreciate the Urtopia package, the price is right too. If you don’t care about the question “carbon or aluminum”, the bike is of course too expensive.

In the Blackweek, the bike is offered 600 euros cheaper. It costs 2699 euros – that’s roughly the price you would have to pay for a comparable aluminum bike.

Share
Facebook
Twitter
Pinterest
WhatsApp
Linkedin
ReddIt
Tumblr
Telegram
VK
Digg
LINE
Viber
Previous article
“There we go Qatar”: the photo of Messi’s children before traveling to the World Cup
Next article
Qatar dollar: next target of the blue and the financiers?