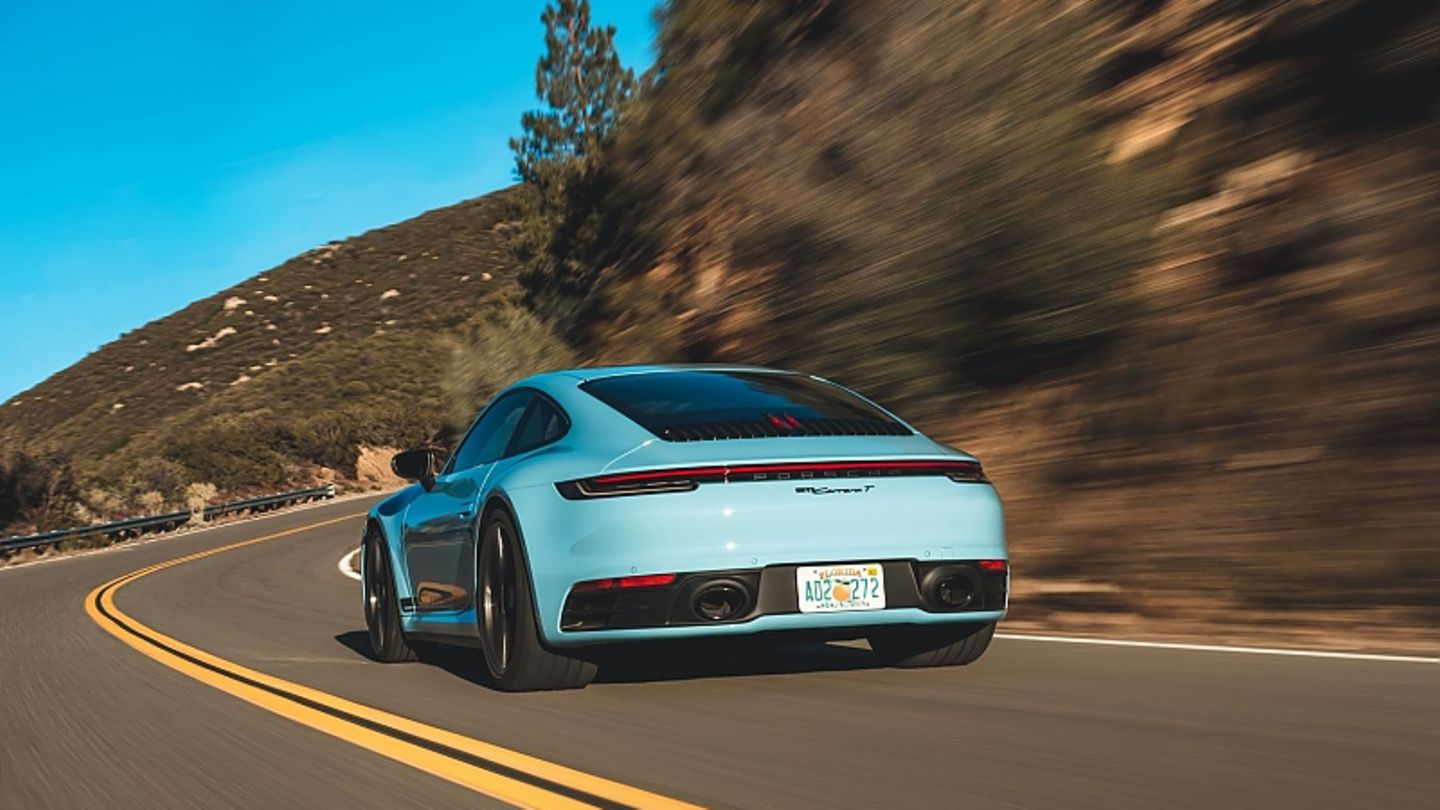 Porsche completes the 911 series with a T variant that is around 35 kilograms lighter than the basic model. Is the surcharge of around 10,500 euros worth it?

The last two Porsche models with the letter T did not receive undivided applause. The people of Zuffenhausen were used to an unfamiliar feeling for the lobes arias. Although the Macau T sells like sliced ​​passion fruit in China, it also impresses when cornering due to the lower weight on the front axle, but the four-cylinder petrol engine lacked real punch when it came to longitudinal dynamics. It’s similar with the Cayman and Boxster. To make it short: A VW Golf engine does not fit a Porsche. Out of self-interest alone, the iconic 911 of the 992 series was spared this fate, just like its predecessor. Because then even the most loyal fans of the Zuffenhausen sports car manufacturer would probably go on the barricades.

So the classic boxer engine from the basic model Porsche 911 Carrera with 283 kW / 385 hp also powers the T variant. A look at the data sheet is enough to identify the differences between the two versions. With a weight of 1,470 kilograms, the T is 35 kilograms lighter than the Carrera. The seven-speed manual transmission makes up a large part of the diet. If you absolutely want the seven-speed dual-clutch transmission, you have to resort to the entry-level Elfer. With the Carrera T you can also get the Chrono Package and the sports suspension for at least 123,845 euros, which lets the body fire ten millimeters lower over the road. The Porsche technicians also threw out the rear seats and installed lighter windows. A little GTS feeling is a must. At at least 123,845 euros, the T-911 is around 10,500 euros more expensive than the Porsche 911 Carrera. “We want to offer an accessible vehicle,” says Michael Rösler, project manager for the overall vehicle 911, adding that the T is positioned between the Porsche 911 Carrera and the Carrera S.

In order to do justice to the chronicler’s duty, here are the driving performances: After 4.5 seconds, the T-911 reaches country road speed and only lets the speedometer needle rest at 291 km/h. Connoisseurs will now immediately raise their fingers with reference to the PDK and point out that the basic Carrera outperforms its lighter brother in both speed disciplines. But the 911 T is not defined by drag racing, but by agility, and 35 kilograms less on the hindquarters has a positive effect.

We grabbed a Porsche 911 Carrera T without the optional rear axle steering and climb the winding Angel Crest Highway near the Pacific metropolis of Los Angeles. After just a few kilometers it becomes clear: Porsche can hardly go wrong with the 911 of the 992 series and so the lightweight of the basic version also gives the driver a lot of pleasure. Especially since the Weissach engineers have not forgotten how to tune a manual transmission. Despite the seven gears and the gear lever that is ten millimeters shorter, the gearshift is gristly in a positive sense and the gears can be engaged precisely.

The latter attribute can also be applied to steering and handling. When it comes to electromechanical control, nobody can fool the Porsche engineers so easily anyway, and this 911 can also be guided through the curves with a steady hand. The steering eagerly informs the driver about the traction of the front wheels. The fact that this sportiness is not feigned with high restoring forces only makes things better. To put it briefly, the Zuffenhausen sports car can be driven intuitively with relaxed wrists.

So it fits into the picture that the lack of rear-axle steering gives the nine-eleven a certain calmness, especially when cornering quickly. Of course there is a lack of agility in very tight corners, but the car doesn’t pull to the right as soon as you think about it. If you also activate the sports exhaust system, you can’t get the grin off your face. The good thing is that the variable dampers ensure a clearly noticeable spread of the chassis: Sporty actually means tight and in normal mode the Carerra T is suitable for long journeys.

This includes the seats. However, the series chairs are rather mediocre by Porsche standards and only offer limited lateral support around the middle area of ​​the upper body and around the shoulders. The fabric cover is also reminiscent of that of a small French car from the 1980s. Except that we’re talking about a sports car that costs a six-figure sum. Otherwise, the 911 T also offers the usual environment with the five round instruments including a central analogue rev counter. But you hardly need it anyway. You drive a 911 by ear!