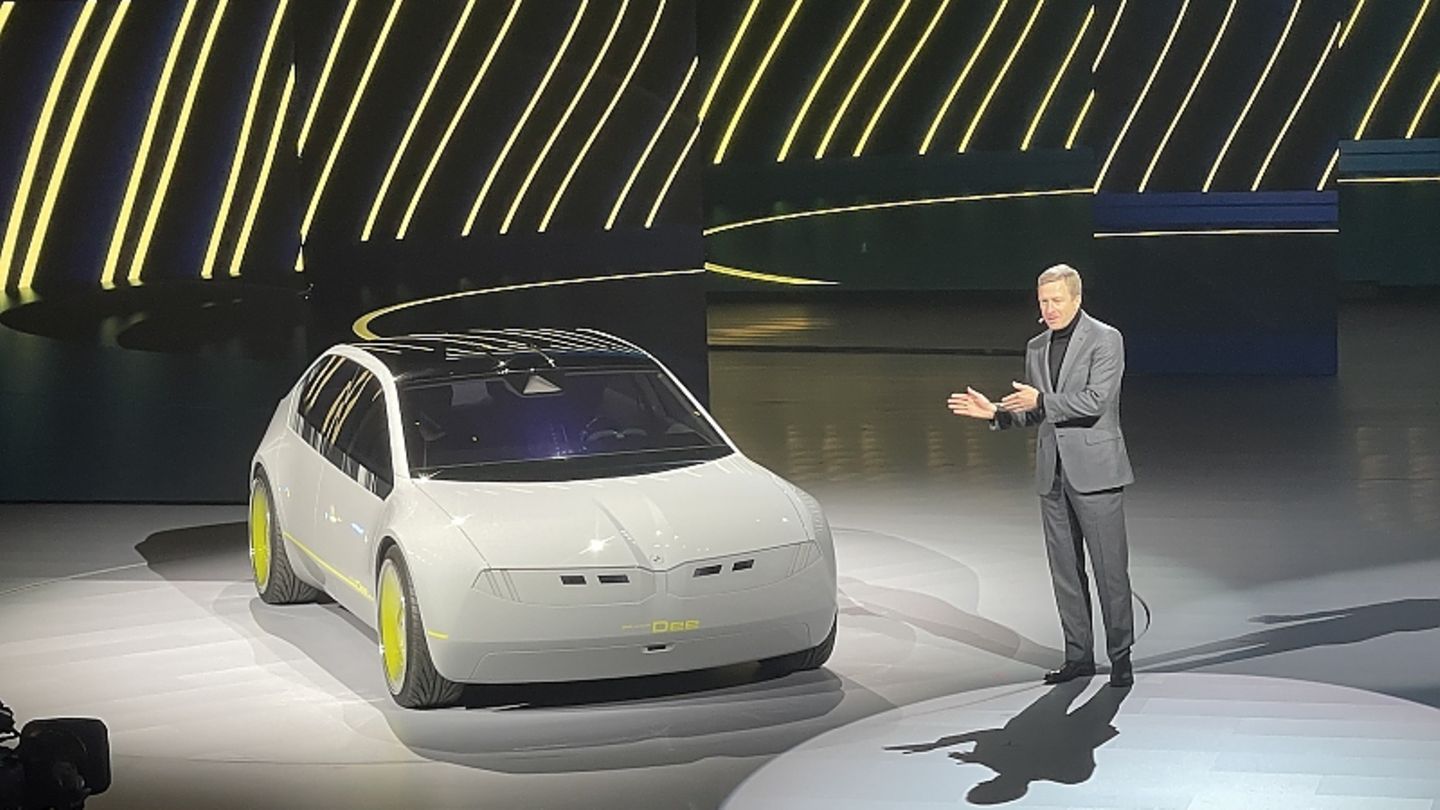 The CES has probably never seen such a show. With the concept study of the i Vision Dee, BMW gave an entertaining preview of its new class, which will celebrate its premiere in the middle of the decade. In the keynote supporting roles ripe for a Vegas Oscar: Oliver Zipse, Arnold Schwarzenegger, David Hasselhoff, Herbie and Kitt.

Anyone who thought that BMW would take a deep breath after the mighty luxury double pack of 7 Series and XM rubbed their eyes in amazement. Now the big Vegas entertainment followed at the Consumer Electronic Show: BMW CEO Oliver Zipse presented the automotive future of the Bavarians in the fully occupied Pearl Theater of the Palms Hotel. Star of the evening: the concept study of the BMW i Vision Dee, which is intended to give more than a foretaste of the new Bavarian middle class and is all too happy to play with its film predecessors Kitt and Herbie. Arnold Schwarzenegger and David Hasselhoff did the rest.

At last year’s CES, BMW had one of the most acclaimed appearances among automakers. This was less due to the large rear screen presented for the first time, which the Bavarians later introduced in a lavish size with the new brand flagship of the seven, but to the BMW iX E-Ink, which could change its color at the push of a button. At the Consumer Electronic Show in Las Vegas, which has been the world’s most important tech trade fair for years, that was enough to draw a lot of attention and applause from the specialist audience, who had traveled to the gaming city despite the ongoing corona pandemic. This year, the Munich company will be much more specific when it comes to new models. Although the concept study of the BMW i Vision Dee, which was unveiled for the first time, will not go into series production, a direct reference to the “new class” planned from 2025 can hardly be denied.

BMW can be more than satisfied with the colorful opening keynote, because even if weeks ago there was little joy that Carlos Tavares, the CEO of another car company, received a lot of attention with a keynote, BMW as a CES permanent guest in the Gambling city the favor of early birth. Because Tavares is only one day later on the stage of the Venetian Hotel with his keynote speech on the mobility of the diverse Stellantis Group and is unlikely to be able to counter the performances of Schwarzenegger, Hasselhoff and Herbie. Important because the Portuguese not only unveil the study of the Peugeot Inception Concept at the tech fair, but also want to pull the cloth from the electric Ram 1500 – a full-size pick-up with great importance for Stellantis and the American brand offshoots Dodge, Chrysler and Jeep .

That did not challenge BMW with Oliver Zipse on the Pearl show stage. After numerous polarizing design creations from BMW, the i Vision Dee does not want to overwhelm its viewers at the trade fair with visual influences. The individual elements of the four-door car are reduced and, in addition to the proportions, focus on BMW icons such as double headlights, kidney grille and Hofmeister kink. The imaginary electrically powered Dee – stands for Digital Emotional Experience – is a mid-range sedan – with a classic three-box design and short overhangs, reduced body lines and an interior that is ultimately what counts in order to win over the trade fair visitors in the gambling city. Of particular importance here is the new head-up display, which is intended to cover almost the entire windscreen. Here, the most important information is not projected into the driver’s field of vision, as was previously the case, but the windscreen serves as a large display of the future. The high-tech display will be available for the first time in the new class from 2025 and will then gradually be introduced in numerous other models. It is operated using minimized touch surfaces of the so-called Mixed Reality Slider or by voice.

After the media success of the BMW iX E-Ink last year, the Bavarians are now vigorously following up on the multi-colored outer skin. The body of the BMW Dee is divided into 240 segments, all of which can be controlled individually and thus change their colour. If you want, you can let the BMW Dee shine in 32 different colors in an island landscape like the VW Polo Harlequin once did. “With the BMW i Vision Dee, we are showing what is possible when hardware and software merge. We are thus exploiting the full potential of digitization to turn the car into an intelligent companion,” says BMW CEO Oliver Zipse, “at the same time the BMW i Vision Dee is another step on the way to the new class.” And where could is there a better way to celebrate such a big step into the future than at the CES in Las Vegas?

Sales of 0km cars grow, these were the most chosen