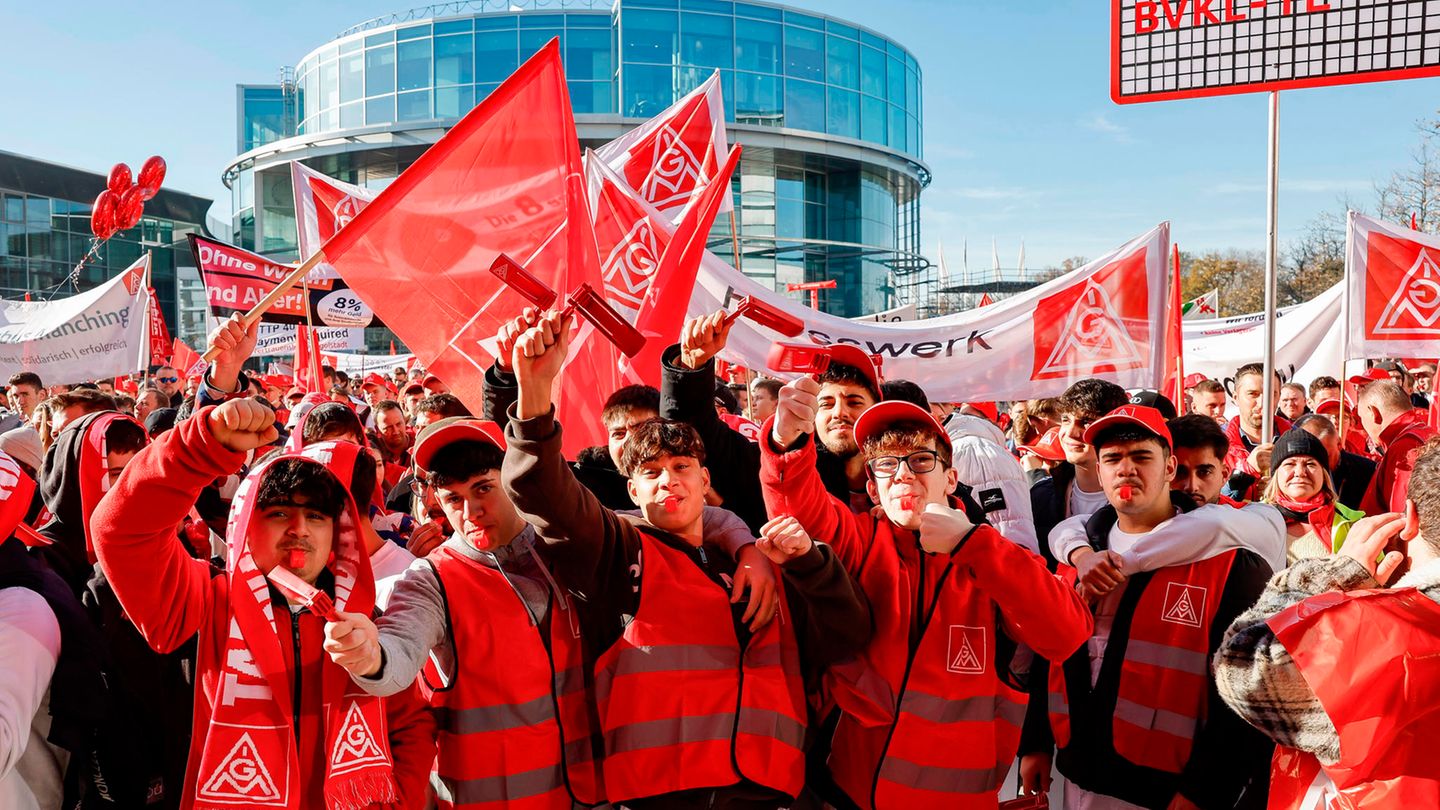 After various strikes and a dramatic night of collective bargaining, IG Metall and employers were able to come to an agreement. There is now significantly more money for employees in the industry.

After twelve hours of negotiations and an imminent termination, IG Metall and employers have reached a collective bargaining agreement for the German metal and electrical industry. Wage increases of 5.2 percent by June 2023 and another 3.3 percent from May 2024 over a period of 24 months are planned for the 3.9 million employees in the industry. In addition, there are tax-free one-off payments totaling 3,000 euros. Both parties announced the result early Friday morning in Ludwigsburg near Stuttgart.

The bottom line would be a table increase of 8.5 percent after two years, calculated IG Metall boss Jörg Hofmann. For a skilled worker, that’s around 7,000 euros more – of which 3,000 euros are tax-free. “That is a word.” From the point of view of Gesamtmetall boss Stefan Wolf, the result is a “strong advance” on the future upswing. However, he conceded that the conclusion was above what the employers actually wanted and what the current situation would allow.

The board of directors of IG Metall, like Gesamtmetall, recommended the adoption of the result in all collective bargaining areas, said Hofmann. After the discussions in the tariff commission, the result will then be transferred step by step to the entire federal territory.

Collective bargaining was on a knife’s edge

IG Metall started the talks in mid-September with its highest demand since 2008: Eight percent more money with a term of one year. The employers had offered 3,000 euros as a one-time payment in the course of collective bargaining. In addition, they had promised an unspecified increase in the salary scales over a period of 30 months.

After four unsuccessful rounds of negotiations, all eyes turned to Baden-Württemberg for the fifth round on Thursday. IG Metall had given the green light for a pilot agreement in the district, which had often been a pioneer for collective agreements in the past. According to the union, both sides had cleared up a number of detailed questions in advance. That the 3,000 euros should come tax-free seemed indisputable even before the round. However, the term and amount of possible wage increases were still open.

On these two points, however, the two parties in Ludwigsburg got so caught up that the talks were briefly broken off. The employers had a hard time with the large amounts that IG Metall had put on the table, said negotiator Harald Marquardt from Südwestmetall. “That was almost a deal breaker.”

According to his counterpart Roman Zitzelsberger from IG Metall in Baden-Württemberg, the term and the amount of the fee did not match – here both sides would have taken a step back and looked for a new starting point. Finally they pulled themselves together: “Strikes in the current situation do not help anyone – neither the employees, who still have an uncertain future, nor the companies,” said Marquardt.

“Our major collective bargaining goal has been achieved”

If the talks failed, IG Metall had threatened in advance with 24-hour warning strikes as well as ballots and general strikes in individual regions. According to the union, around 900,000 employees nationwide had temporarily stopped working by the time of the hearing on Thursday.

“We certainly swallowed one or two toads, but also had the feeling that the others didn’t get away without swallowing toads,” said Südwestmetall negotiator Harald Marquardt. “Our major collective bargaining goal has been achieved,” said Zitzelsberger. He acknowledged that the union would have liked the payments to be made earlier.

From the point of view of trade union boss Hofmann, the agreement is also a contribution to limiting the recessionary tendencies in the German economy. The lack of economic strength is mainly driven by a decline in private consumption. “With a wage agreement like this, we have not only achieved fair burden sharing, but also a responsible agreement in terms of further economic development.”

IG Metall District Chief Zitzelsberger is seen by many as a hot candidate to succeed Hofmann next year. On Friday, however, he didn’t want to weigh in at first on the fact that he was the one who completed the pilot’s degree. “The question is whether Jörg Hofmann will not compete again. In this respect, I would let Jörg Hofmann make his decision at this point,” said Zitzelsberger. Only then will the question of succession arise. Hofmann has been union leader of IG Metall since October 2015. In October 2023, the trade union congress will elect a new leadership. The 66-year-old Hofmann left open whether he wanted to continue.