The industry fell slightly in October and cut annual growth to 3.8% In this sense, the consultant highlighted that among the sectors that showed a drop, the production of non-metallic minerals -construction inputs- interrupted more than two years of growth, while oil refining was affected by the stoppage of capacity expansion that is carried out at the distillery from Dock Sud. While chemical and plastic products, with a marked decline, chained a quarter of falling activity.

Among the sectors that showed progress, metalworking continues to be supported by the performance of agricultural machinery and auto parts, the report noted.

He added that the automotive block was again the one that showed the best performance in the monthHowever, among the terminals, stops and reductions in the rhythm of production begin to be repeated due to the lack of semiconductors due to global supply problems, and imported parts as a result of the implementation of the new import system.

All in all, in the accumulated for the first ten months of 2022, the industry once again reduced the growth rate to 3.8% in comparison with the same period of 2021.

Regarding the performance of the industrial branches between January and October and in the comparison with the same period last year, Automotive production easily leads the growth ranking, accumulating an increase of 29.1%. 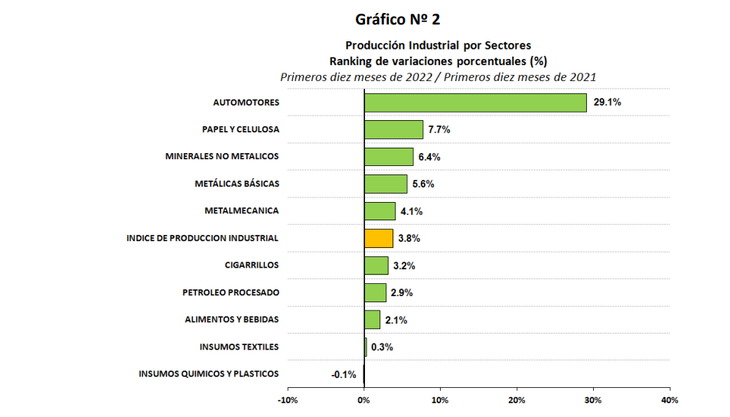 Finally, the chemical and plastics block, which accumulated a quarter of falls in October, halted the improvement in activity compared to the level reached in the first ten months of last year.

In terms of the contribution to industry growth in the January-October period, automotive production makes a contribution of more than 50% and with metal-mechanics they contribute 70% of the progress of the periodhighlighted FAITHFUL.

He remarked that observing the activity by the type of goods produced, in the first ten months of the year and in the year-on-year comparison, the growth ranking is led by durable consumer goods with an accumulated advance of 11.9%.

Capital goods occupy the second position with an improvement of 9.7%. The production of non-durable consumer goods advances 2.2%, while goods for intermediate use accumulate an increase of 1% compared to the period January – October 2021.

“The performance of the automotive and metal-mechanic industries explain the position of durable and capital goods, while the decline in chemicals and plastics, non-metallic minerals and oil refining in October explain the slowdown in fixed goods intermediate”, analyzed the consultant.

Likewise, he indicated that in October the seasonally adjusted production again showed a setback (-0.3%) in the comparison with the previous month.

“Activity has been cut since last April and in the month of October it was placed 7.3% below the record corresponding to that month. The indicators that allow evaluating the sustainability of the phase have begun to show negative values”, warned FIEL.

In summary, he highlighted that industrial activity in October had a slight year-on-year improvement, with falls in important sectors. And that the seasonally adjusted measurement has been cut since last April, with a marked deterioration in the indicators of sustainability of the recovery.

“In the months to come, the restrictions on imports -with the implementation of the new controls and the lower availability of foreign currency- will begin to show an impact in various sectors beyond industry, contributing to the slowdown in aggregate activity.”, he concluded.