David Zimmerschied: Ripped off at Schafkopf after the end of the shoot 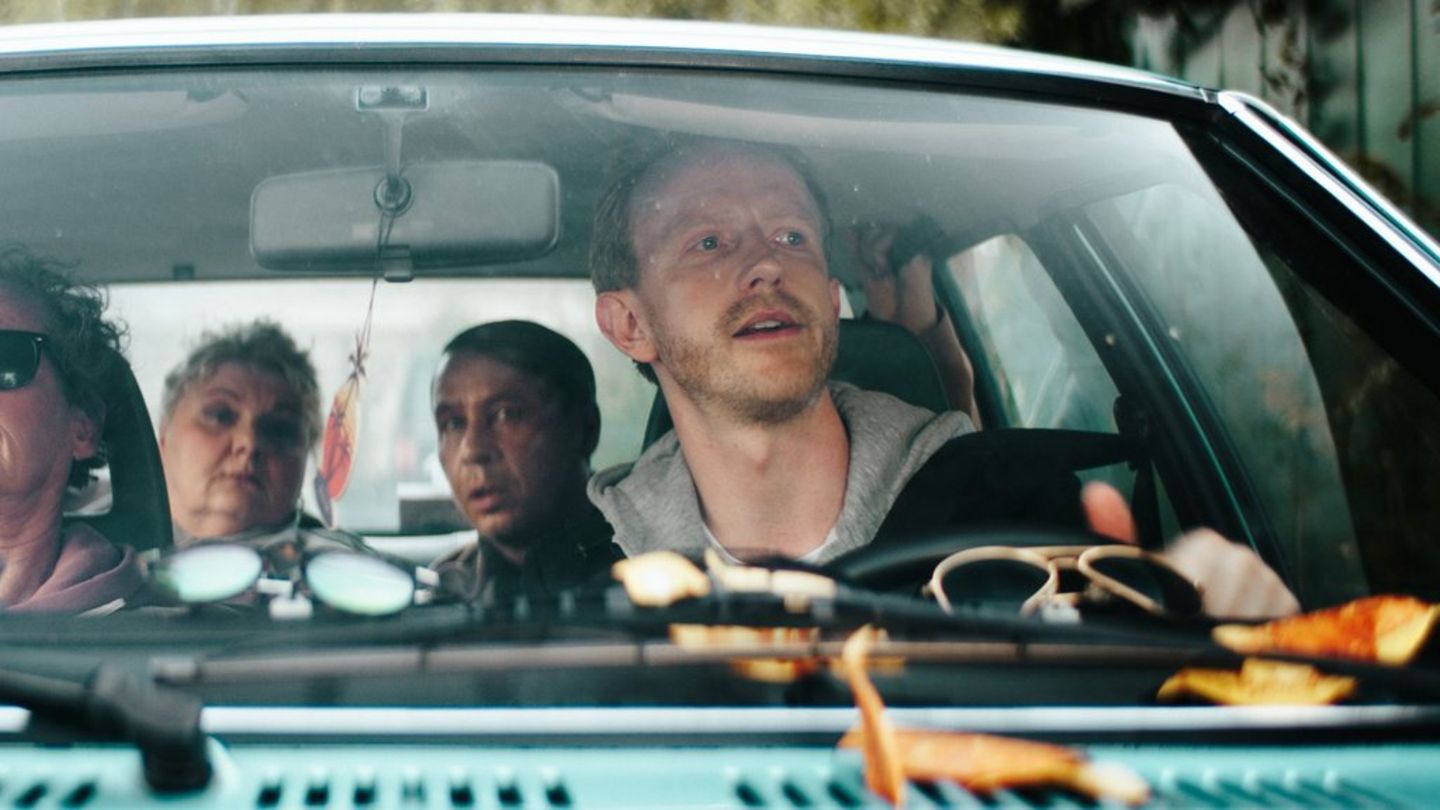 David Zimmerschied’s new film Who Buries the Undertaker? starts in the cinema. In the interview he talks about death, haters and sheepheads.

In the bizarre Bavarian cinema comedy “Who digs in the undertaker?” (Theatrical release: November 3rd), the villages of Greisendorf and Neubrunn are vying for the future final resting place of the former silent film star Gaby Gruber (Astrid Polak, born 1935). The oldest woman in Germany, at the record-breaking age of 114, is far from thinking about dying, but the inhabitants of both communities are still hoping for a boost from her grave. But when the Greisendorf undertaker Bartl Beerdegen (Uli Bauer, born 1957) died unexpectedly, leaving only his student intern Marina Ganterer (Johanna Singer, 20) behind in addition to a mountain of debt, a replacement was needed quickly. And this is where his Schafkopf buddies, the gardener Gert Ganterer (Tom Kreß, 55), the garbage driver Rudi Roller (Angelika Sedlmeier, 57) and the plumber Pat Paluczek come into play.

The latter is played by actor David Zimmerschied (39). And in an interview with the news agency spot on news, he told, among other things, how his attitude towards funerals has changed a lot over the course of his life and why he is not afraid of death. The native of Passau also revealed what he experienced during Schafkopf training after the end of shooting on the set of the black humor comedy.

How do you prepare for a Bavarian cinema comedy like “Who digs in the undertaker?” before?

David Zimmerschied: For “The Undertaker” I primarily clarified the character traits in which the character differs from me. Why, for example, he always flees when it gets too much for him. Or why it scares him to show his feelings. And the relationships with the other characters. The historical context naturally plays an important role in the case of “Boot”. I always feel a great responsibility towards people who have experienced situations that I find difficult to imagine growing up in security and abundance. Sitting in the trenches in Russia for months at -35 degrees with just a coat, for example. A large part of the preparation is research. Books like “Is that a man” (1947) by Primo Levi (1919-1987), for example. movies help. YouTube and Wikipedia are true treasure chests.

In an interview you said that a good film is characterized by courage. What about Who Buries the Undertaker? particularly brave?

Zimmerschied: For example, I think the cast is very courageous. Because Tanja and Andreas Schmidbauer, who directed and produced the film, cast the actors and actresses who best suited their ideas for the role. And not the ones that are best known or have the most followers.

You play the plumber Pat. What was the most challenging part about this role?

Zimmerschied: The comedy genre was the biggest challenge. Comedy is the Champions League. If the timing slips a second, it’s not funny anymore. And it’s funny when you take the serious dilemma the character faces so overly seriously, as if it were a matter of life and death every time. This exaggeration makes it funny.

You may have witnessed one or the other burial in real life. What particularly touches you?

Zimmerschied: That has changed a lot: My first funeral was when I was six, when my grandmother died. With whom I spent a lot of time and who I loved very much. It was sad, but I thought it was a shame. And I don’t think I cried at all. Then, twenty years later, a friend of my dad died and I cried snot and water. Because I was so infected by the sadness of those present. And when my aunt died three years ago, I thought the funeral was nice. The remembering. The anecdotes. to be touched together.

Do you deal with death in general or do you rather push the topic away?

Zimmerschied: In fact, I think about death every day. And I don’t think death is bad at all. Maybe because I’m convinced that we will be reborn. I’m afraid of pain, which can go hand in hand with dying, but I’m not afraid of death. I’m more excited to see what comes next. In my next life I would like to be a Swedish rock star. Is hereby ordered.

The film is also about the traditional Bavarian card game Schafkopfen. What is your personal connection to it?

Zimmerschied: When I was little, my dad sometimes gambled through the night with his “specials”. And then I went to the kitchen in the morning like a detective and assembled the traces of the night into my story. I learned to play and love Schafkopf especially for the film. We often gambled a few more rounds in the hotel in the evenings after shooting was over. I ended up with a total of minus 1.40 euros (laughs).

You’ve been in front of the camera and in the spotlight for a very long time. What do you love most about your job and what could you do without?

Zimmerschied: I love variety. New people, cities, places. This keeps the mind alert and flexible. I love the variety in the roles: the different people with their concepts and wishes and fears that I have to understand. That I can deal professionally with being human – and with myself. I love that I can act comedy and make people laugh and touch people in drama. The only thing I sometimes find tedious is when the preparation gets too theoretical. Too small. And I lose the playfulness about it. But otherwise: best job in the world (laughs).

You come from a family of artists. How can you imagine it at a family reunion. Is it a lot about art?

Zimmerschied: With my uncle [Sigi Zimmerschied, Red.] I actually talk a lot about film and cabaret, yes. About our own work, but also about films that fascinate or touch us. And with my mum a lot about puppet theater. She is a puppeteer. My dad, on the other hand, has no idea about film, and I argue with him about politics. And if that gets too heated, let’s talk Buddhism and soccer. I don’t see myself as an artist at all. For me, acting is first and foremost a craft.

You once said that you are very good at being alone in your private life. What is your favorite way to pass the time? And what generally helps you to switch off after filming?

Zimmerschied: Yes, I actually love being alone, having time for myself. Learning to say “no”. I lead a wonderfully unspectacular life: sleeping, going to the gym and lifting a few heavy things – sport has actually become very important to me in the last few years -, shopping, cooking – mostly vegan -, reading, meditating, watching a movie in the evening and maybe go for another walk. I love that. I can also switch off quite well. And then there is also the other side of me, which, after a few days that I have just taken to myself, enjoys being among people, meeting friends and talking.

Social media certainly plays a role in your life as well. As seen again recently, you respond to haters in an unusual way by offering them the real conversation. How much effort does that cost?

Zimmerschied: That doesn’t cost me any effort, because I have no impulse to insult these people back. When I put myself in their shoes and imagine how someone must feel when they insult people on the Internet whom they don’t know at all, then that touches me more. Then I feel their need, sadness, helplessness. Maybe a feeling of being left behind. But of course it does something to me and hurts me too. I want to speak my mind and still be loved by everyone, and of course that’s not possible. But I find the tone in which we often deal with each other, especially on the anonymous Internet, questionable.

Zimmerschied: I find street photography the most interesting. Candid everyday situations that are often wonderfully weird and absurd. And I like watching excerpts from Jimmy Fallon (48) and other American shows. You can learn so much from them when it comes to smart, light entertainment with Esprit. But fortunately I can regulate myself relatively well. If three posts in a row in the feed annoy me, I turn it off. I don’t have that endorphin-keep-scrolling reward thingy.

Finally, a little outlook. What can your fans expect after the theatrical release of “Who digs in the undertaker?” look forward to next?

Zimmerschied: On November 18, I’m doing a reading at the Literaturhaus in Munich. We are visited by two Ukrainian writers who have written books about their war experiences and who are currently deployed. I read passages from her books. These are two guys my age who were skateboarding and eating their bowls in Kyiv up until a few months ago and now they’re fighting a war. 2,500 kilometers from here. Actually, I can’t really understand it at all. In addition, “Munich Games” is currently running on Sky, an internationally cast mini-series that deals with the 1972 terrorist attacks in Munich and the Israeli-Palestinian conflict. I can really recommend them. And in winter I’m up to mischief in the second season of the history series “The House of Dreams” on RTL +.