New York Art Triennale: when art encourages us to introversion 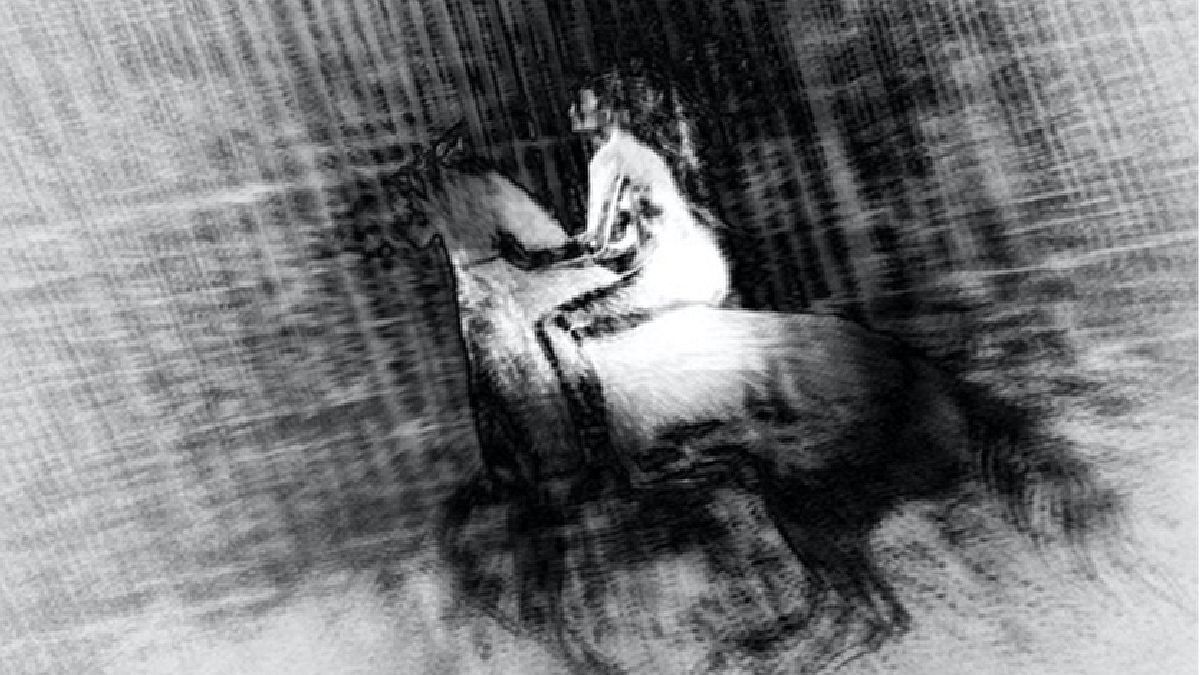 The set of works selected by the curator refers us to the Americanist spirit from a contemporary perspective where beliefs, symbols, commemorations and transversal concepts such as nature, habitat, are combined with re-signification, reappropriation and one’s own perspective, regarding such sensitive and current issues for our societies.

It is in this sense that the artist Gabriel Alvarez, invites us to discover from his series Books of Origin: Book of Miracles and Little Devils, religious beliefs, but at the same time endowed with mystery and a strong symbolic load. The container form that embraces the content, takes us back to the native sound boxes used at parties, commemorations of the spirit. Although its reticular structure seems to induce a rigid form, it is the pregnancy of color, which through its vibrations gives the scene strength and contrast by nuance. With a marked respect for materiality, he chooses elements from the natural world such as sand, dyes that he combines with fillers, wires and others, to create textural-sgraffito surfaces, where the wink of the line and the simplicity of the form are the main door of entrance to his exquisite imagination. To dive inside his books is to rediscover the past brought to life in the present.

Mixed media and lithographs on paper Gustavo Amenedo that are part of the set of works exhibited, from his Babel series, show us his investigation into collage and the intervened monocopy. With an allegorical intention, evoking the primitive votive offerings of a miraculous nature, but resignified with typographies and lines of significant gestural force, sometimes as latent directions, others as edges of color that sign shapes and spaces, mark, delimit. Like offerings, promises, hanging on the walls, they take us back to the votive offerings that hung on the ceilings of the churches. 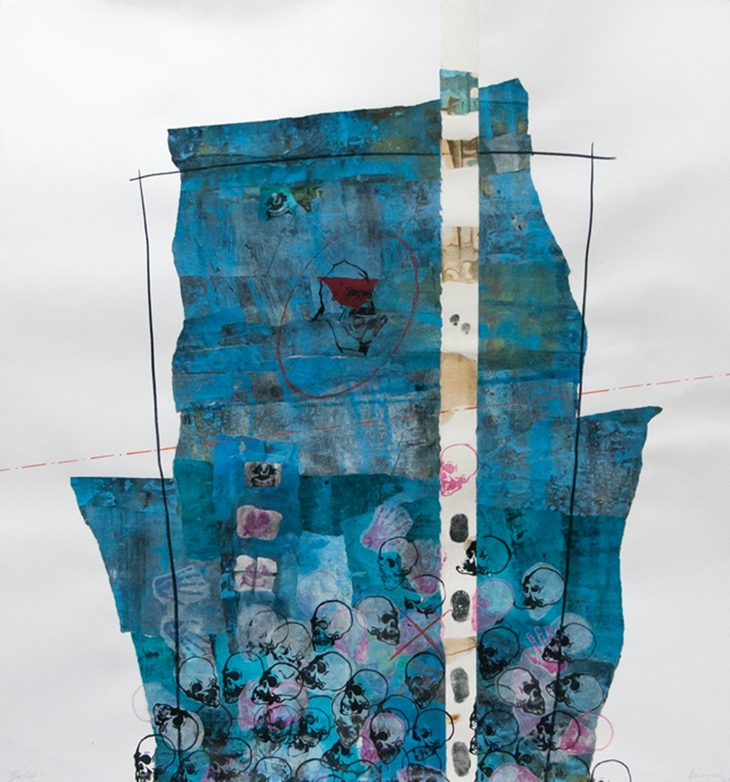 In the world of engraving it is Luciano Well, with his monocopies and florisgraphies on rose petals and vegetable solvents, who introduces us to his world of recollections and memories, using a limited palette, where achromats predominate. The distortions of his figures and the markings as a visual accent are a hallmark of his proposals. The line not only recreates contours but shapes volumes and builds visual textures. For their part, the woodcuts of juliet warman, also using the line as the protagonist -drawing textures and creating volumes- however, they encompass surreal worlds, with a certain dramatic charge. From the series Human Solitudes, the work “Inner Seas” envelops us in its whirlwind of sorrows. Experimenting from the individual to the collective, we can find in this set of works, the digital proposal on paper entitled, by Gabriel Mahia and Mariana Campo Lagorio. This way of creating, finding respect for the doing of the other in consonance, enriches not only the essay, but also the plastic debate. The impression creates an effect of reversibility where the organic and the figurative are assembled in a whole of signifiers.

In the path of distortion and also with a limited palette, close to the monochromatism we can appreciate the painting of the Cordovan Hyacinth Munoz, in this selection: “Romance of the child of the water”. It inquires and invites us to discover through the child’s reflection, with extreme simplicity, Agüero’s poetic message. You can also see ink drawings in a polyptych that allows, through the grimace of the stain and the fair and naked redrawing of its inhabitants, to establish the universe of the child of the water, in unison with the small sculptures. It is in the water where the rounded stones or gems appear in transparencies or solids close to the shores, there the artistSilvia Battistuzzi finds his motivation, to investigate in the most unfathomable of his intimacy in line with the calls of nature, with its hidden forces and the energetic powers of the ancient minerals. Moss agate, aquamarine, ametrine, amazonite, obsidian, seem to reemerge from their mixed fabrics to illuminate the day and enhance the night, to allow us to delve into the hidden places of the soul. Plots that paraphrase the organic world and interweave dreamlike underworlds. prints on fabric Dart Fabian Flores they put us back in contact with nature, in this case it is man who is transported through it, looking for answers, contemplating its immensity, warning about its possible destiny, there can be many answers, however, it is clear that it puts us in a position to reflect , examine and persuade us in our possible actions. Silence as a metaphor for death and the nostalgia of color in an achromatic resolution, with dim lights that seem to indicate paths, create the necessary atmosphere for introversion. 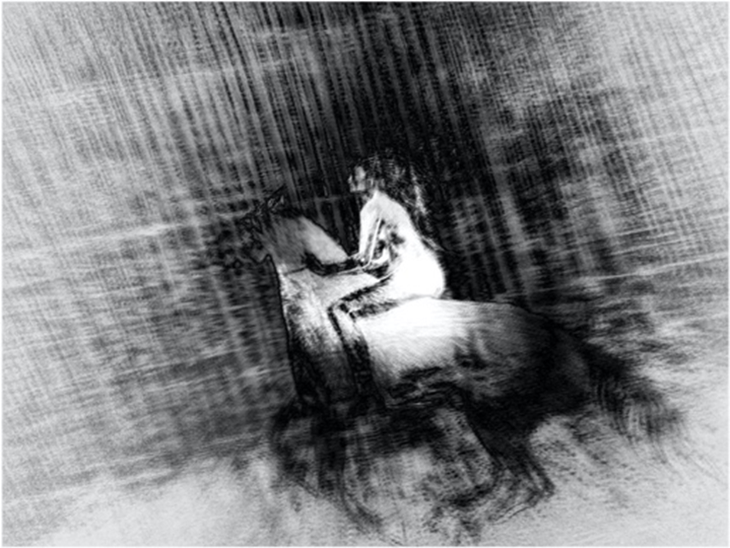 It is in the silk prints of Christina Fresh, where we can feel the evocativeness of the offering, giving from the most visceral. The hands with their delicate gesture, bearers of delivery, of the invitation. They are the female figures melted into the background and their light accent that guide our gaze, that direct the intentions of opening our essence. The pregnancy of red, life, passion, love, strength, emotion, but also associated with danger, that state of alert against the irrationality of being, injustice and lack of honesty with nature itself. These inherent and distinctive ways of feeling, thinking and acting of some human beings, make us reconsider before the work, the elevation of the spirit, the soul in flight, as the artist invokes.

Red is the color chosen also by Natalia Volpe to narrate in his textile collage entitled “Dry blood”, where thread, needle, fiber, dissidence, interweaving of lives, line gestures and frameworks, bring us closer to a space of interpellation of the self.

The entire proposal demands of us an active perception, criticality towards the messages and signs of the societies we inhabit, commitment as observers and respect for legacies and identities.

Independent manager and curator. Museum Coordinator in charge of the Municipal Museum of Fine Arts of Tandil (Mumbat), dependent on the Undersecretary of Culture and Education. Director of Mumbat since January 30, 2004. Artistic director of Artemio Gallery 2013-2021. Independent manager and curator of national and international exhibitions. She performs curatorships and montages.