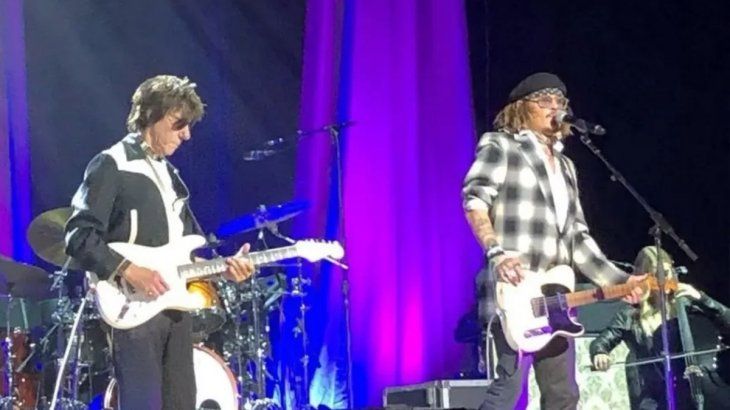 One of the first to remember the guitarist was Jagger. The Rolling Stones frontman shared a snippet of him playing the song “Commit a Crime” with Beck during a White House concert in 2012.

With the death of Jeff Beck we have lost a wonderful man and one of the greatest guitar players in the world. We will all miss him so much. pic.twitter.com/u8DYQrLNB7

“With the passing of Jeff Beck we have lost a wonderful man and one of the best guitarists in the world. He will be sorely missed by all.” commented the singer on his Twitter account.

“I am devastated to hear the news of the death of my friend and hero Jeff Beck, whose music has moved and inspired me and so many others for so many years,” Gilmour commented.

I am devastated to hear the news of the death of my friend and hero Jeff Beck, whose music has thrilled and inspired me and countless others for so many years.
Polly’s and my thoughts go out to his lovely wife Sandra.
He will be forever in our hearts. pic.twitter.com/369rHU7BCX

And he closed: “Polly’s and my thoughts are with his lovely wife Sandra. She will be forever in our hearts.”

Debbie Harriefrom Blondie, shared a photo of Jeff Beck performing and illustrated it with a heart emoji.

For his part, Jimmy Pageguitarist for Led Zeppelin and The Yardbirds, a band Beck joined, said that “the Six String Warrior is no longer here for us to admire the spell it could weave around our deadly emotions. Jeff could channel music from the ethereal.”

His unique technique. His imaginations of him apparently limitless. Jeff I will miss you along with your millions of fans. Jeff Beck Rest in Peace. https://t.co/4h1DfXXmWI

“His unique technique. His seemingly limitless imagination. Jeff, I will miss you along with your millions of fans. Jeff Beck Rest In Peace,” he added in a second tweet.

Sir Rod StewartMeanwhile, he said that “Jeff Beck was on another planet. He brought me and Ronnie Wood to the US in the late ’60s in his band the Jeff Beck Group and we haven’t looked back since.”

2/2
He was one of the few guitarists that when playing live would actually listen to me sing and respond.
Jeff, you were the greatest, my man. Thank you for everything. RIP

“He was one of the few guitar players that when he played live he would hear me sing and respond. Jeff, you were the best, my man. Thanks for everything,” Stewart commented.

“I cannot express how saddened I am to learn of the passing of Jeff Beck. What a terrible loss to his family, friends and his many fans. It was such an honor to have known Jeff and an incredible honor to have him play on my most recent album. Long live Jeff Beck.”Ozzy Osbourne posted.

goodbye to a legend

Jeff Beck’s death was announced by his family this Wednesday, just one day after the death occurred.

“After suddenly contracting bacterial meningitis, he passed away peacefully yesterday”their relatives explained on the musician’s official Instagram, where they also asked for privacy to go through the moment.

Beck was one of the most influential rock and blues guitarists in history. In his career, he was inducted twice into the Rock & Roll Hall of Fame. In 1992, for his work with The Yardbirds and as a solo artist in 2009.

In 2015, Rolling Stone magazine ranked him the fifth greatest guitarist of all time, one spot ahead of blues icon BB King.