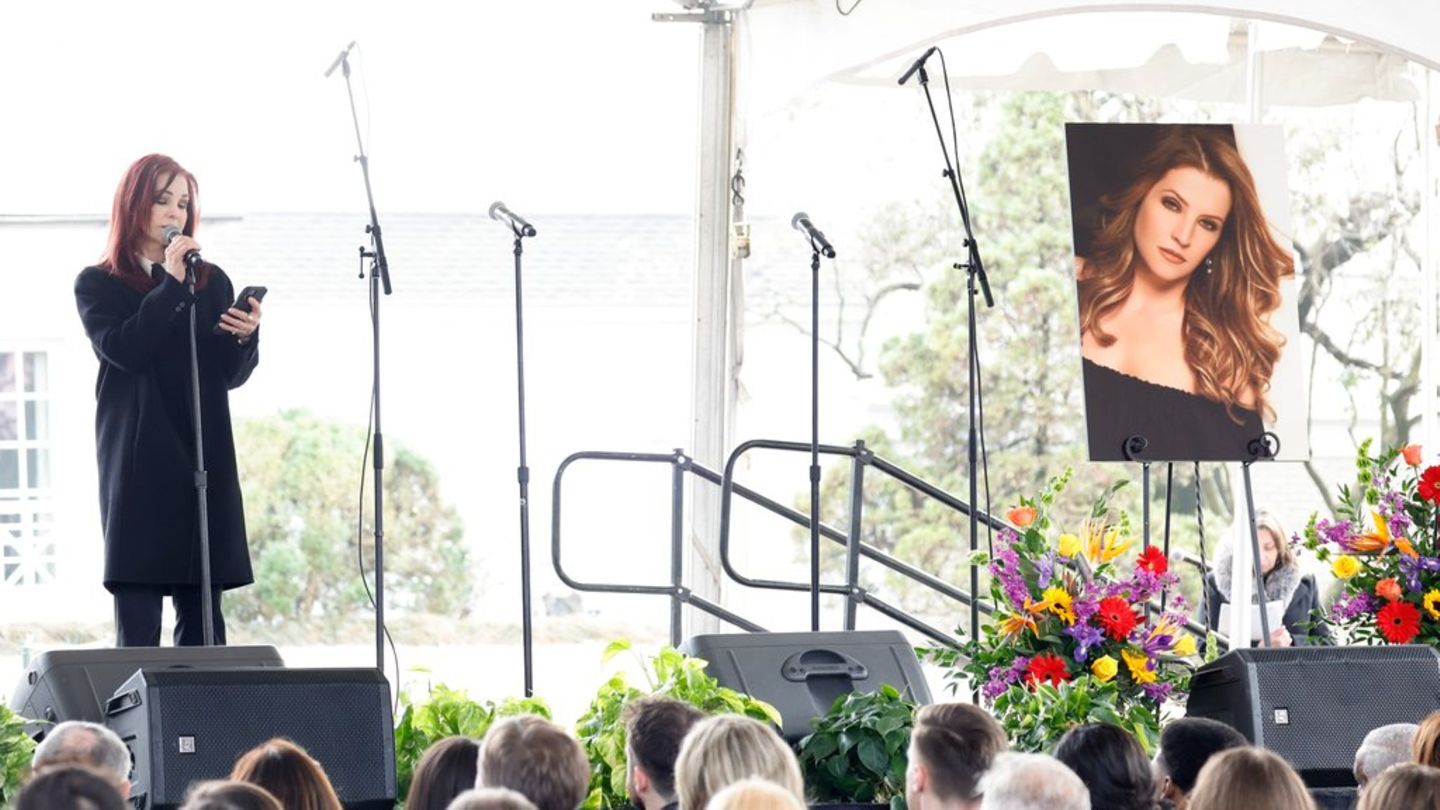 The funeral service for Lisa Marie Presley was held at Graceland over the weekend. Priscilla Presley provided one of the most emotional moments.

Singer-songwriter Lisa Marie Presley (1968-2023), the only child of Priscilla Presley (77) and rock ‘n’ roll icon Elvis Presley (1935-1977), was born on Sunday at the legendary family home Graceland in Buried in Memphis, Tennessee. Relatives, friends and hundreds of fans gathered for a public memorial service full of emotional moments.

Priscilla Presley, who was married to Elvis for six years until they divorced in 1973, paid tribute to her daughter along with artists such as Alanis Morisette, 48, Guns N’ Roses frontman Axl Rose, 60, and Smashing Pumpkins singer Billy Corgan (55) last respects. Those were the most emotional moments.

After a speech by Elvis friend and music manager Jerry Schilling (81), Priscilla Presley spoke. “I’m going to read something my granddaughter wrote for you all now and that says it all,” the 77-year-old actress and businesswoman began. “I have no idea how to put my mom in words. The truth is there are too many. Lisa Marie Presley was an icon, a role model, a superhero for many people around the world, but mom was my icon , my role model, my superhero – in more ways than one. Even now I can’t convey everything there is to understand or know about her, but like she always said, I’ll do my best.”

Priscilla Presley tearfully explained, “‘She knew I loved her. I’m afraid I could never reach her. Thank you all for being here… Our hearts are broken. Lisa, we all love you. “

The Duchess of York, Sarah Ferguson (63), was also among the mourners. She too wept as she quoted her late ex-mother-in-law, Queen Elizabeth II (1926-2022), as saying: “My late mother-in-law used to say that nothing can be said to take away the fear and pain of these moments , because grief is the price we pay for love – and how right she was.”

Ferguson told mourners they will all now be supporting Priscilla and Lisa Marie’s children, Riley, 33, and twins Harper and Finley, 14. “If you just stretch out your hand, we’ll be there. I’ll definitely be there.”

Alanis Morissette was among the artists who took to the stage at the memorial service on Sunday and paid her musical tribute. The 48-year-old singer sang her song “Rest” at the Presley family home on Elvis Presley Boulevard. The seven-time Grammy winner was accompanied by a pianist during her song.

The touching ballad “Rest” was first performed by the Canadian-born singer at the memorial service for Chester Bennington (1976-2017). The Linkin Park star took his own life in July 2017.

Help with depression and suicidal thoughts is available from the telephone counseling service on the free number: 0800/111 0 111

Axl Rose: “I couldn’t have imagined in a million years…”

After that, Axl Rose performed. Addressing those in attendance, he said, “I could not have imagined in a million years to be here singing under these circumstances.” Morissette wrote the song “for those of us struggling with depression and anxiety, isolation, suicidal thoughts and the deep despair that mental illness can plunge us into”.

Before singing “November Rain,” Rose added, “I know that Lisa loved her family very much and did everything she could to protect her father and his legacy.”

Marie Presley’s eldest daughter indirectly provided another emotional moment. Riley Keough’s husband, Ben Smith-Petersen, spoke of a daughter the couple had had in secret while speaking on behalf of his wife, who was sitting in the front row.

Smith-Petersen, who has been married to Keough for eight years, did not provide any further information, including when their daughter was born or what her name is. A rep for Keough confirmed to People magazine that she gave birth to a girl in 2022.

Lisa Marie Presley died of cardiac arrest on January 12 at the age of 54.