Dementia: how relatives can deal well with the sick 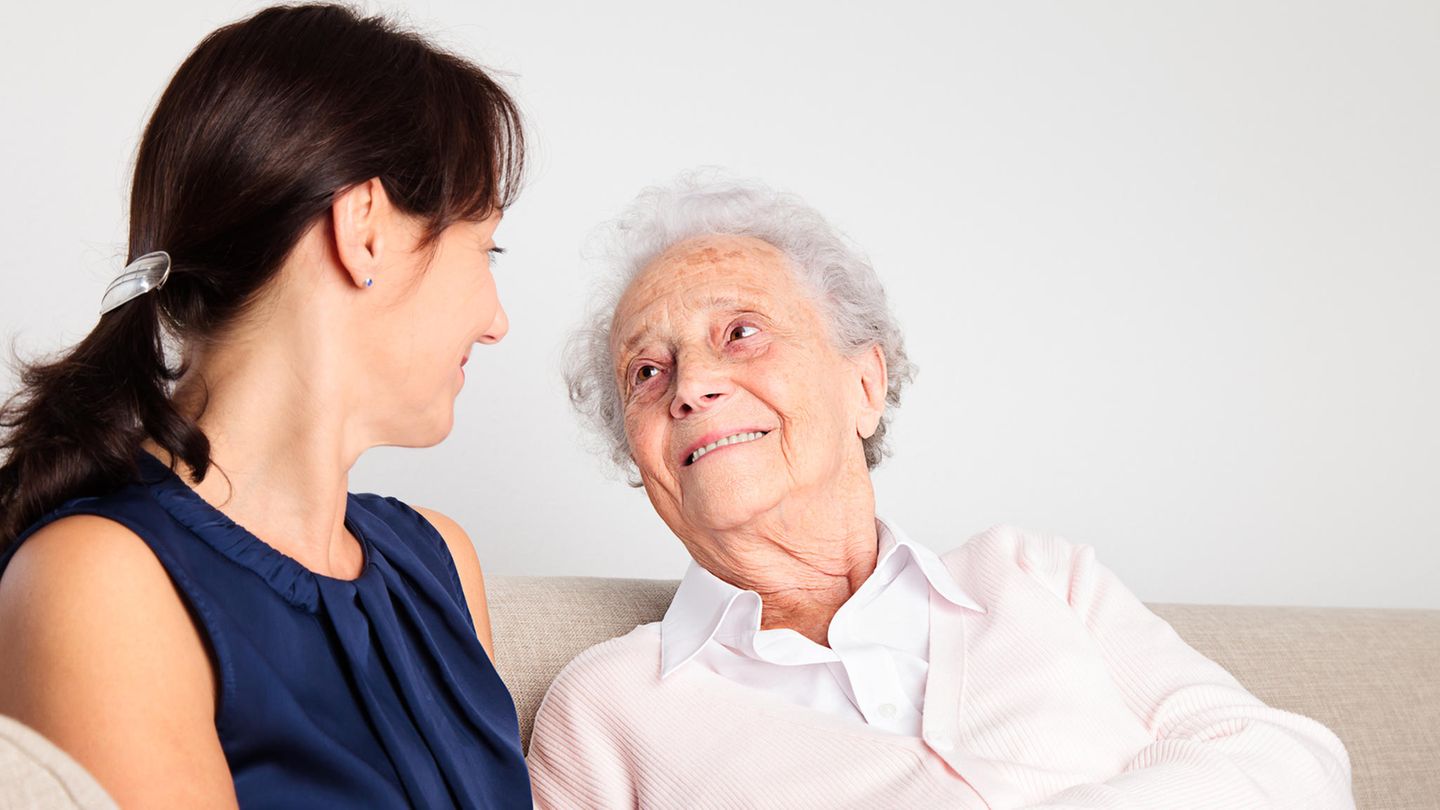 When the shoes are put away in the refrigerator or when the retired mother suddenly stands in full gear in the hallway at night because she wants to go to work – relatives of people with dementia will be able to tell some such anecdotes. In everyday life, however, such situations can lead to conflicts. The dementia expert Michael Schmieder gives advice on how to deal with people with dementia in his book “Dement, but not forgetting”. He managed the Sonnweid home in Zurich, which was considered one of the best dementia facilities in the world. We have summarized the most important tips from the expert.

Dealing well with people with dementia is important, because according to the German Alzheimer Society (DAlzG), the number of people with dementia in Germany is constantly increasing. There are currently around 1.8 million people living with dementia in Germany, most of whom are affected by Alzheimer’s. Alzheimer’s is named after the German neurologist Alois Alzheimer, who first scientifically described the disease in 1906. Alzheimer’s leads to a breakdown of the nerve cells in the brain. The result: memory and orientation disorders, changes in personality, disorders in the ability to think and judge, and speech disorders. Patients are less and less able to cope with everyday life on their own and need support.

How this type of help can succeed and when dementia begins:

If the father is constantly looking for his mobile phone, forgets the name of a friend or has forgotten the appointment with the family doctor, many children worry whether their parent has just become somewhat forgetful with age or whether it could be the first signs of dementia. Forgetfulness alone is not a cause for concern – at most an annoyance, writes dementia expert Michael Schmieder. However, it can be the first sign if the father no longer remembers having made the family doctor’s appointment at all, wants to go to work at night even though he has been retired for a long time or is no longer sure where to go on familiar routes . Anyone who suspects that their father or mother might have dementia should keep a kind of diary with the failures and forgetfulness and exchange ideas with others in order to find out whether it is just sloppiness or an illness behind it.

It is also difficult for many people when their partner appears to have dementia. The expert advises to save yourself accusations and to remain patient. “Talk to each other about it when it’s a good moment. Ask whether you should also confide in relatives and friends,” advises Michael Schmieder. It is good to ask the person concerned to be allowed to write down the forgetfulness – this way a tendency can be identified and a discussion with the family doctor can be suggested. You should prepare your partner for a test to detect dementia and for visits to specialists.

World Alzheimer’s Day has been held on September 21 since 1994. During Dementia Week, there are many activities related to people with dementia and their families.

Dementia affects not only the patient, but also their relatives – in addition, there is little recognition of care, which quickly leads to relatives caring for them becoming impatient or making the situation aggressive, writes Michael Schmieder. An example: “If you are overwhelmed with your wife’s intimate hygiene – personal hygiene is only at first glance an easy task. It is normal to come up against physical or psychological limits. The role change from partner to caregiver is difficult.”

It is therefore important to seek support in good time. A nursing service that helps several times a day can improve the quality of life for everyone involved. A meal service can also be useful. Many relatives want their sick relatives to stay at home for as long as possible and not be cared for in a home. “If your burden is so great that you wish your partner, your mother or your father should die, it is high time to enter the home,” says the expert.

The patient is always right

“The life of a person with dementia always takes place in the here and now, there is no tomorrow and no yesterday, only this uncompromising now: everything has to happen now. Eat now, lie down, get up, go to the toilet, go outside, be inside . All needs have to be satisfied immediately”, is how Michael Schmieder describes it. This makes caring for people with dementia very challenging. Caregivers should always make it clear that all wishes, mistakes and impositions are never caused by bad intentions on the part of the patient, but are part of this illness. His principle when dealing with dementia: “The patient is always right.” Because: The father or mother with dementia are convinced that their view of things is the only right one and do not allow themselves to be lectured. If you remember this and act according to this principle, you can save yourself many unnecessary conflicts that lead to nothing.

What does that mean in practice? If people with dementia make a mistake like putting shoes in the fridge, you can just put them in the hallway silently. The person with dementia cannot recognize the shoes as out of place in the refrigerator because the sense of direction has been lost. Another situation: “Or to keep the night’s sleep by suggesting to the workaholic partner to set the alarm clock for eight o’clock. After breakfast there is still enough time to go to work.” According to Michael Schmieder, the focus should be on alleviating stress and eliminating fears in such situations.

If help is not accepted by the person with dementia

In one situation or another, we all hide the fact that we are not good at something. Cognitive abilities dwindle in people with dementia – a very understandable desire to sometimes want to hide this. Often there are also specific wishes hidden behind it, such as cooking for the whole family again, explains Schmieder. “Overestimating one’s own possibilities can be comforting when one feels that one’s skins are swimming away in so many areas of everyday life.” The expert’s advice: Don’t contradict demented people once desire and reality are mixed up. Relatives should get involved in the dreams of the demented.

Relatives often observe that people with dementia become aggressive and they don’t know why. The dementia expert reports from his experience what can be behind it:

When it comes to embarrassing situations in public

Unfamiliar surroundings or a change in surroundings can lead to people with dementia being overwhelmed. Sometimes this leads to embarrassing situations in public – if you only live in the here and now, you can tell someone straight to their face that they don’t like them, writes Michael Schmieder. Conventions and good behavior no longer play a role for those who are ill. He recommends not saying anything at such moments. It’s better than saying something wrong. Because: people with dementia would forget the conventions, but notice the reactions of their environment, which can cause stress and shame.

Instead, relatives should better consider which excursions would still make sense. Festivals and celebrations would only trigger stress in patients who no longer feel up to the jubilation and hustle and bustle. It is better to use quieter occasions to preserve the world for those who are ill. That can be walks in the forest instead of a shopping spree in the hustle and bustle of the city center. “And the best way to socialize, which I never tire of recommending to all relatives: Sing together! Whether it’s a Christmas carol or a tearjerker, music still awakens the spirits of life even when consciousness seems to have finally fallen asleep,” writes Michael Schmieder .

When the mother with dementia has to go to the hospital

When you are admitted to the hospital, it is essential that you inform the hospital staff about the dementia disease so that they are aware of the needs. If an intervention is planned like an operation, it is best if the clinic has a geriatric ward. Geriatrics is geriatric medicine and this is where people with dementia are usually in the best of hands. Some hospitals also have wards for people with dementia. A hospital stay, whether planned or an emergency, is pure stress for dementia patients, says Michael Schmieder. Relatives should therefore stay by the side of the sick person in the hospital for as long as possible.

It is important that the mother or father with dementia is visited as often as possible in the clinic – the expert advises taking turns with other relatives and friends. If a doctor determines that it is necessary, the costs for bed and food for an accompanying person will be covered.