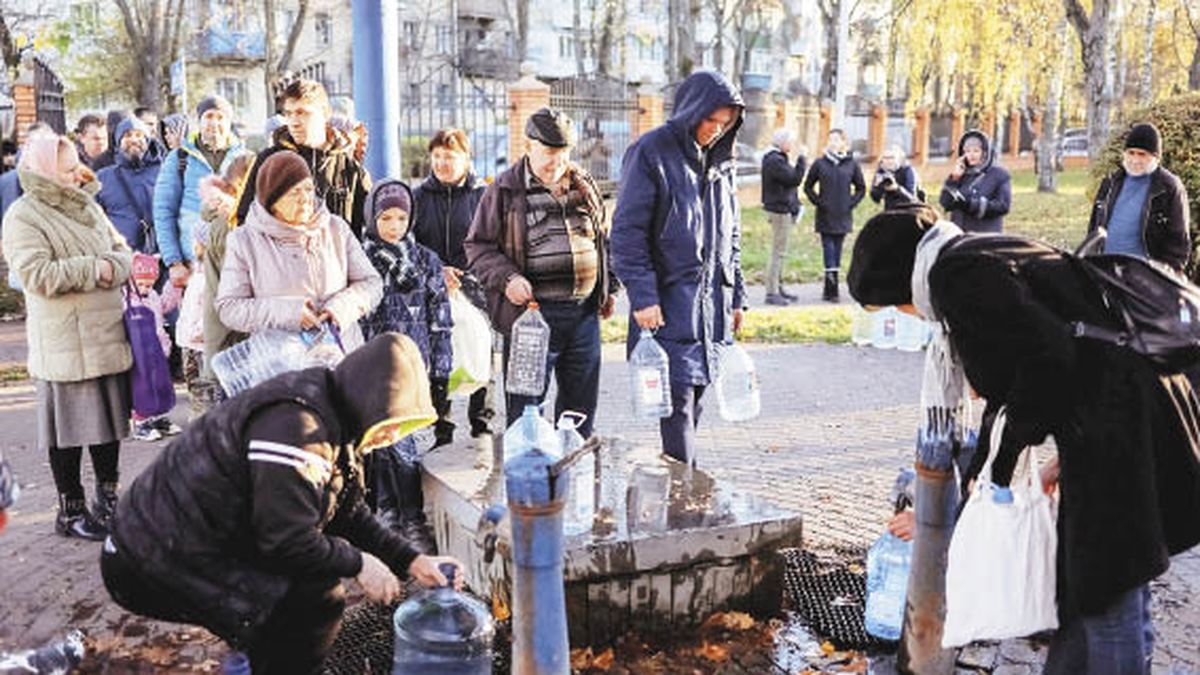 The Ukrainian president, Volodímir Zelenski, said in his daily speech that he had met with the German chancellor, Olaf Scholz, whom he thanked for the anti-aircraft defense weapons delivered. “We need to build an anti-aircraft shield over Ukraine,” Zelensky tweeted.

After the interview with Zelensky, Scholz condemned the Russian attacks on civilian infrastructure in Ukraine. He also rejected Russia’s accusations that kyiv is making a “dirty bomb.”

The UN nuclear body announced that it had launched inspections in Ukraine as part of “independent verifications” of the Russian allegations.

The director of the International Atomic Energy Agency (IAEA), Rafael Grossi, will communicate this week his “initial conclusions on the two sites” inspected, according to a statement from the agency.

In kyiv, the Ukrainian capital, at least five explosions were heard, according to journalists on the spot. “80% of users do not have water,” the city’s mayor, Vitali Klitschko, said on Telegram, and “350,000 homes” do not have electricity, “he detailed.

For his part, the Ukrainian Prime Minister, Denis Shmihal, stated that there were power outages in “hundreds” of towns in 10 regions.

According to the Ukrainian Minister of Foreign Affairs, Dmitro Kuleba, at least twelve countries have already committed to donating generators and other equipment to alleviate the lack of electricity. More than a hundred people lined up yesterday morning in a park in kyiv to refill bottles and jugs with water, due to supply cuts caused by Russian bombing.

Similar attacks hit infrastructure across Ukraine, including in Lviv (west), Zaporizhia (south) and Kharkiv (northeast). “Instead of fighting on the military ground, Russia is fighting civilians,” Kuleba criticized.

The bombings come after Russia announced over the weekend that it was suspending its participation in the deal to export Ukrainian grain, a pact that has eased the global food crisis.

The Kremlin warned that it would be “dangerous” and “difficult” to maintain the pact without its participation, as it cannot guarantee navigation safety for cargo ships. The Russian army demanded “commitments” from Ukraine not to use the sea corridor intended for the export of grain for military purposes. According to Moscow, kyiv fired on its fleet in Crimea from that area.

“Security in that area cannot be guaranteed until Ukraine agrees not to use this road for military purposes,” the Russian Defense Ministry said on Telegram.

For the spokesman for the United States Department of State, Ned Price, this request “is similar to collective punishment or collective extortion.”

Russian President Vladimir Putin insisted that “Ukraine must ensure that there will be no threats to the safety of civilian ships.” Russia’s withdrawal on Saturday from the agreement that allowed the shipment of grain blocked in Ukrainian ports since the beginning of the Russian invasion fell like a bucket of cold water.

The agreement, signed in July between Russia and Ukraine, and mediated by Turkey and the UN, was key to preserving food security, especially in poor countries dependent on Ukrainian grain.

Despite Russia’s decision to withdraw from the deal, two ships loaded with grain and other agricultural products left Ukrainian ports, according to a shipping website.

Twelve ships were waiting in Ukrainian ports waiting to leave during the day and another four would go to them, said the Joint Coordination Center (JCC), responsible for supervising ships destined for the export of the grain from Istanbul.

In this context of uncertainty, cereal prices rose yesterday morning. After meeting with the UN Secretary General, Antonio Guterres, President Zelensky assured that his country is determined to “remain a guarantor of world food security” and continue with its grain exports, he wrote on Twitter.