Bolsonarists vindicate Nazism and call for a military coup 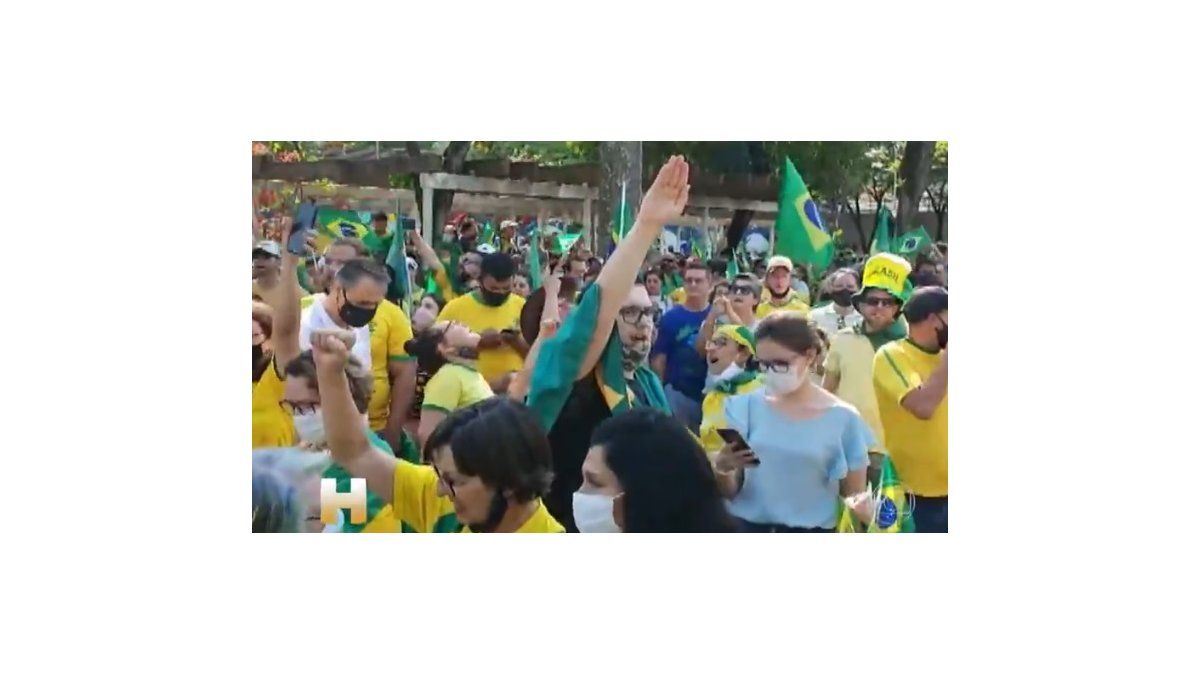 The protesters understood -and so they disseminated it through more than 220,000 WhatsApp and Telegram groups that they claim to have- that Bolsonaro’s speech yesterday at the Planalto Palace, two days after being defeated, invites them to continue demonstrating and claiming fraud. .

The president avoided admitting Lula’s victory and said that he will respect the Constitution, while justifying the protests, although he opposed their being violent.

“We have come to ask the Army to carry out a federal intervention in the institutions of Brasilia, in the electoral justice, to vote again because there was fraud. We are the people and we do not accept the elections, we want the recount of the votes,” he told Télam Marcelo Rossetti, one of the organizers of the march in São Paulo, dressed in a Brazilian national team shirt, which has been worn since 2015 by followers of the extreme right.

REAPPEARANCE. President Jair Bolsonaro gave his speech in the Planalto. Meanwhile, his followers blocked roads asking for an Army intervention to stop the transfer to Lula da Silva.

According to Rossetti, the demonstration should allow a coup to prevent Lula’s inauguration. “Bolsonaro did not recognize Lula’s victory in his speech, that is why we are here, not to allow him to take office”shouted Marcia, raising a sign with the phrase “No to Communism-Stop Communism.”

The protest generated traffic chaos on the Day of the Dead holiday in front of the Southeast Command of the Brazilian Army, in the vicinity of Ibirapuera Park, one of the emblematic places of São Paulo, the largest South American city.

In the protest, which was called by WhatsApp and Telegram groups, many of the participants interviewed by Télam repeated the false news that reached them on their cell phones, such as that a decision by the head of the Army to arrest the president of the electoral court was imminent. , Alexandre de Moraes. In the place, however, there were no political leaders of weight.

The slogan of the coup plotters was similar to the one used by Bolsonaro in the campaign: homeland, family, property and freedom. Dozens of demonstrators set up tents in the vicinity of the Legislative Assembly of São Paulo, in front of the Army barracks, to carry out a “vigil” to request that the elections be annulled.

Bolsonarists call for a military coup with Nazi signs.mp4

“Lula cannot assume, he was convicted and he will not have a break if he assumes the government,” commented a man who identified himself as Rafael Vieira, who assured that the one who carried out a coup d’état was “the Supreme Federal Court” by annulling the conviction of the corruption charges against the now elected president.

The founder of the Workers’ Party (PT) spent 580 days in jail and was banned in the 2018 elections, which Bolsonaro won, for convictions that were later annulled for bias and lack of jurisdiction of the judge.

In Rio de Janeiro, the demonstration blocked Avenida Presidente Vargas and in Bahia a small group marched in front of the Salvador regiment.

The demonstrators blocked the streets without being repressed by the police. These protests take place while the road blockades started on Monday by Bolsonarists who did not recognize the result were reduced in the country, despite the fact that the president ordered the transition to begin with Lula’s team.

The Federal Supreme Court (STF) determined that the Military Police participate in the actions to lift the pickets, including on national routes, and that the director of the Highway Police, Silvinei Vasques, be investigated.

The supreme court also authorized the Military Police to identify trucks used to block traffic for a fine of 100,000 reais (more than $19,000) per hour per detention.