67 people died, including an Argentine, when a plane crashed 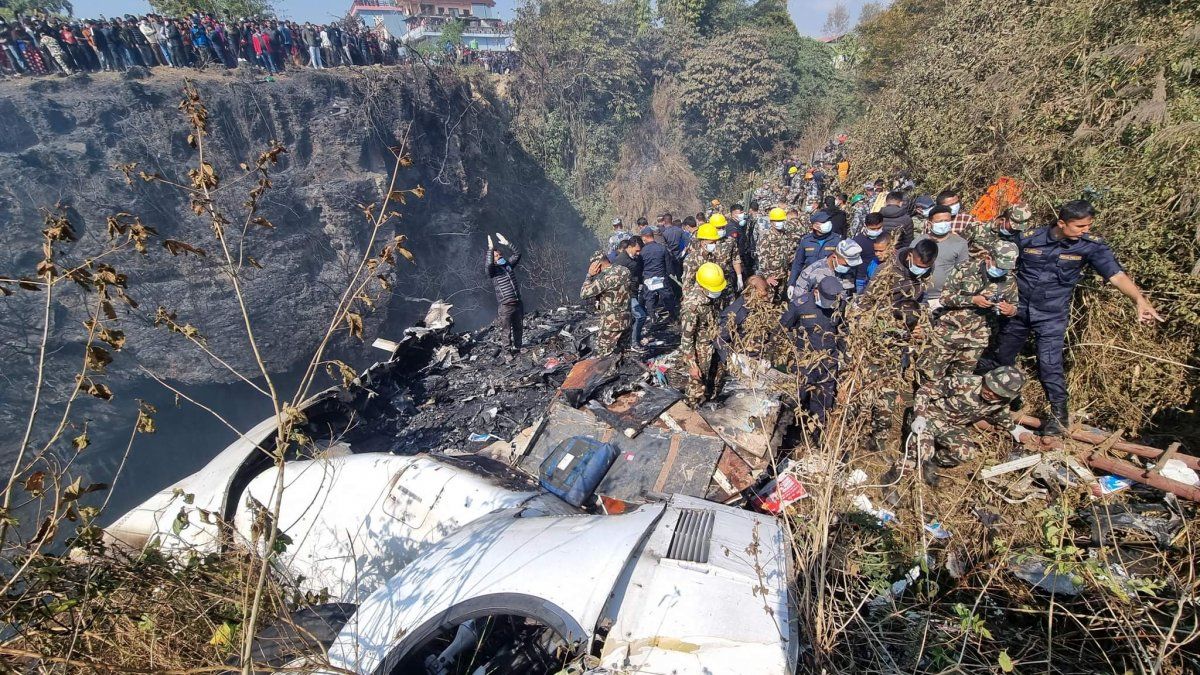 The foreigners were five Indians, four Russians, two South Koreans, one Irishman, one Australian, one Argentinean, and one Frenchman. The moment in which the ATR 72 twin-engine plane fell abruptly was recorded in a video that quickly went viral on social networks.

Jannet Sandra Palavecino, a Neuquén who traveled to mountaineer in the Himalayan peaks, is among the deceased.

The flight, coming from Kathmandu, the Nepalese capital, crashed shortly before 11 local time (2:15 Argentine time) near Pokhara, in the center of the country, where it was supposed to land. This city is an important crossing point for foreign pilgrims and mountaineers.

The burned-out fuselage of the device was in a deep ravine between the old Pokhara airport, created in 1958, and the new international terminal in this city, inaugurated on January 1.

“The plane crashed in a ravine, so it is difficult to remove the bodies. The search and rescue operation continues. So far no survivors have been found,” an army spokesman, Krishna Prasad Bhandari, told AFP.

A local official initially said “some” survivors were taken to hospital, but this was not confirmed by Yeti Airlines or other sources.

After the accident, rescuers tried to put out the fire among the remains of the device, an ATR 72 powered by two turboprop engines.

The worst accident in 30 years

The accident is the deadliest in Nepal since 1992, according to the Aviation Safety Network database, when a Pakistan International Airlines Airbus A300 crashed into a hillside on approach to Kathmandu, killing 167. people who were on board.

The plane made contact with the airport from the Seti Gorge at 0505 GMT, the aviation authority said in its statement. “Then it crashed.”

Police officer Ajay KC said rescue teams were having difficulty reaching the scene, in a gorge between two hills near the resort town’s airport.

“Half of the plane is on the hillside,” said Arun Tamu, a local resident, who told Reuters he arrived at the scene minutes after the plane went down. “The other half has fallen into the Seti River Gorge.”

Khum Bahadur Chhetri said he watched from the roof of his house as the plane approached, noting in an interview with Reuters that local residents took two passengers to a hospital.

Nearly 350 people have died since 2000 in plane or helicopter crashes in Nepal – home to eight of the world’s 14 highest mountains, including Everest – where sudden changes in weather can create dangerous conditions.

The journey from the capital to Pokhara, Nepal’s second-largest city nestled beneath the picturesque Annapurna mountain range, is one of the most popular tourist routes in the Himalayan country, where many prefer a short flight rather than a six-hour journey over mountainous roads.

Pokhara airport spokesman Anup Joshi said the plane crashed on approach, adding that it was “flying at 12,500 feet and was in normal descent.”. The weather on Sunday was clear.

Flight tracking website FlightRadar24 said on Twitter that the Yeti Airlines plane was 15 years old and equipped with an old transponder with unreliable data. He added that the last signal was received at 0512 GMT at an altitude of 2,875 feet above mean sea level.

Pokhara Airport sits at around 2,700-2,800 feet above mean sea level, according to FlightRadar24.

The ATR72 from European aircraft manufacturer ATR is a widely used twin-turboprop aircraft, manufactured by a joint venture of Airbus and Italy’s Leonardo. Yeti Airlines has a fleet of six ATR72-500 aircraft, according to its website.