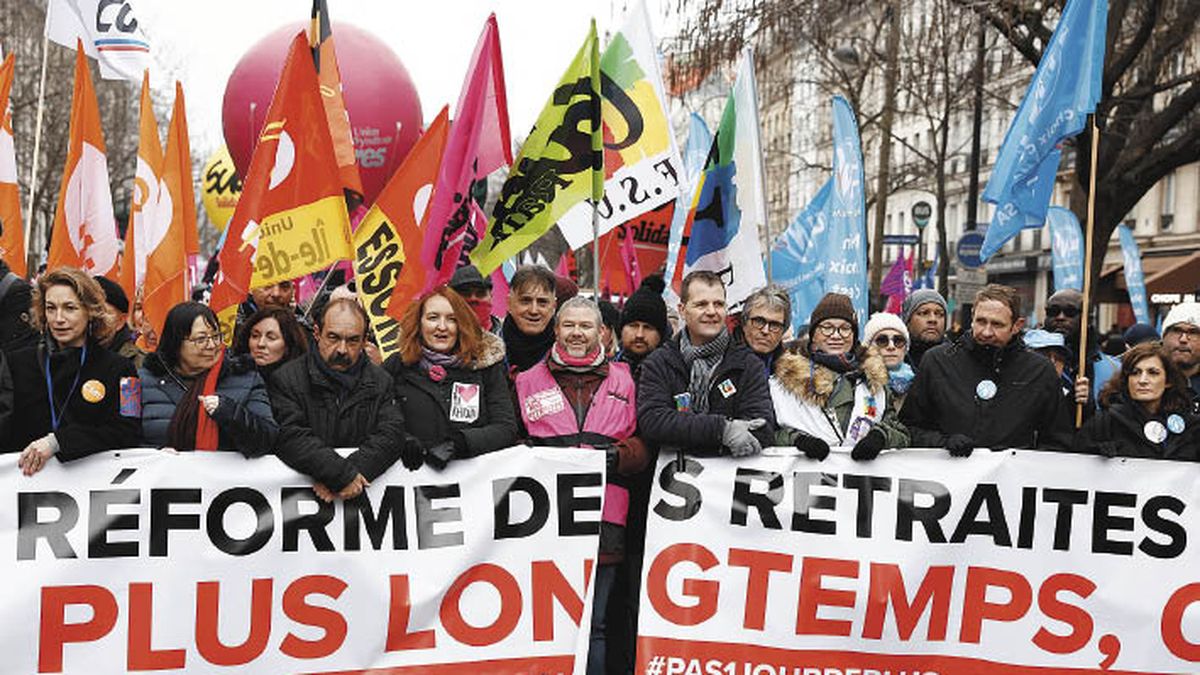 The line of demonstrators was stopped at the beginning of the avenue, in the Plaza de la República.

“Are we being taken for a ride! They don’t know what it’s like to work until they’re 64 under these conditions and they could well find the money elsewhere, especially by taxing capital,” said Manon Marc, an education worker in Paris.

The reform of the pension system is one of the key measures that the 45-year-old French president promised during the campaign that led to his re-election in April, after a first project in 2020 that he had to abandon due to the arrival of the pandemic.

However, after years of crisis –given by the protests of the “yellow vests”, the pandemic and inflation–, this fight represents a “living test” for Macron and on “the mark he will leave in history”, said the newspaper Le Parisien.

The president, who was in Barcelona yesterday for a Spanish-French summit in which he encouraged Pedro Sánchez to jointly confront the protectionism of the United States, tried to weaken the union front by pointing out that there are unions that “call to demonstrate in a traditional framework” and others who want to “block the country”.

Although his intention was to delay the retirement age from the current 62 years to 65 years, thus approaching the rest of the European countries, its Prime Minister Élisabeth Borne raised the possibility of 64 years as a pledge of negotiation, but bringing forward to 2027 the requirement to contribute 43 years to collect a full pension.

The Government considers the necessary reform to alleviate a future deficit in the social security fund.

These two points crystallize social and union rejection. According to an Ipsos poll published on Wednesday, although 81% of French consider a reform necessary, 61% reject it and 58% support the strike movement.

“A tough conflict awaits us. We must abolish the totem of the retirement age and the extension of the contribution period”, predicted the general secretary of the FO union, Frédéric Souillot.

The first unitary union front since 2010, when they tried in vain to prevent the delay of the retirement age from 60 to 62 years by the conservative government of Nicolas Sarkozy, said yesterday that it had brought a million protesters to the streets. Authorities expected between 550,000 and 750,000 people across the country, including 50,000 to 80,000 in the capital.

Minister Clément Beaune had warned the day before that yesterday would be a “hellish” day in transport and called on citizens to work from home, where many will also have to take care of their children.

“I worked from home, as with strikes I can’t take any chances,” said Abdou Syll, a consultant who must cross the Paris region to get to his office. “If it happens again, I will stay teleworking for as long as possible.”

The circulation of the subway and trains in Paris woke up “very disturbed”. One metro line was completely closed and 12 others were only partially working, the RATP company said.

The same happened with the SNCF railway company, which was able to dispatch one high-speed train in three or five, depending on the lines, and one regional train in ten.

In the crucial energy sector, the administrator of the electrical network RTE found a sharp reduction in production, equivalent to twice the consumption of Paris, for which it warned the strikers not to reduce it further.

The CGT union announced that the majority of refineries registered between 70% and 100% of personnel on strike, which, together with future strikes, rekindles fears of a fuel shortage like the one experienced in October and which forced the government to intervene. .

After this first action, the unions have to decide how to continue. The Liberal government, for its part, must approve its final project on Monday, before its parliamentary debate that could last until the end of March.

“The government has already lost a battle: that of convincing the people,” said leftist leader Jean-Luc Mélenchon from Marseille (southeast). The left-wing parties and the far-right opposition will vote against the reform.