The attack on Cristina Kirchner, accomplices and black birds 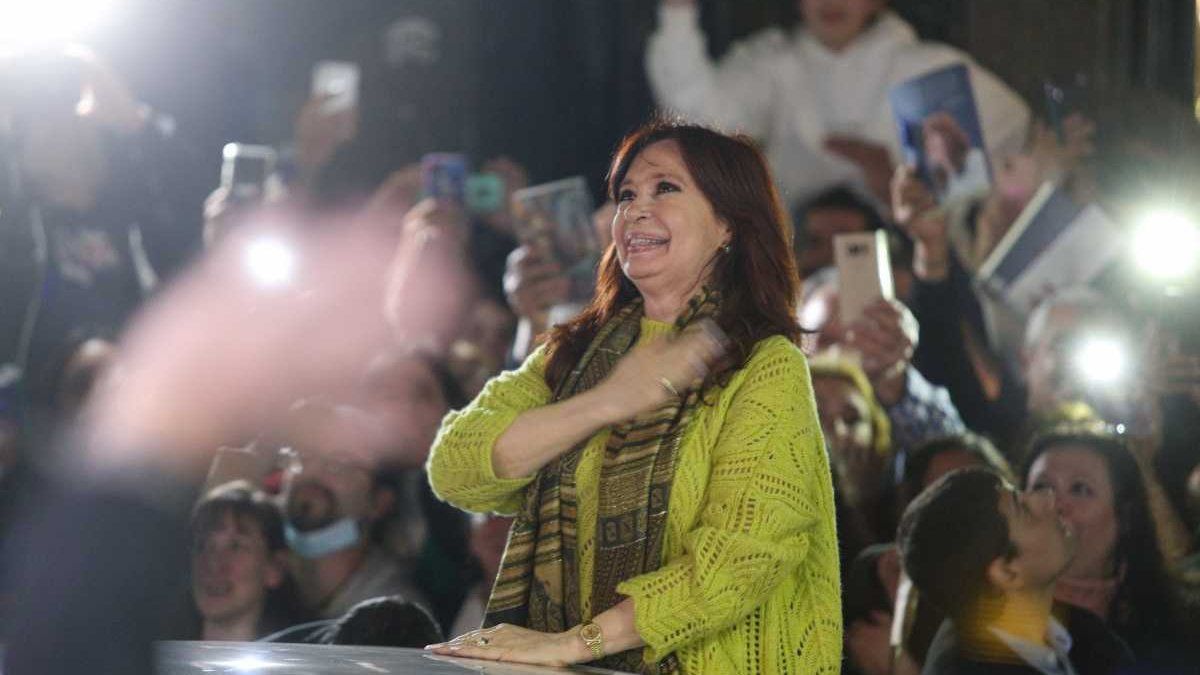 The myth of the eternal failure

They appeal to feelings with phrases: “people are hungry”, but in reality, families are not interested in a radish. They are the same ones who promised and helped the creators of Disneyland, to put us on the “ghost train”. Voice of those who looted and they helped multiply the public debt 50 times in 43 yearsThey naturalized lying, espionage for personal purposes and so many barbarities. They made language violence fashionable and there are no limits: days ago the president of the PRO told an official of Horacio Rodríguez Larreta: “Next time I’ll break your face” (Infobae, 11-01-2022).

vVerbal and symbolic violence, with minions financing a gang of brainless people who carried guillotines and body bags to Plaza de Mayo. Finally, they financed a group, which carried out an unsuccessful attack that could generate a civil war (Page 12, 11-06-2022). Other flat earthers campaigned against vaccines and got many people to die for not getting vaccinated.

The greatest we know of “The Contractor Homeland”, were the businessmen who amassed and continue to accumulate fortunes doing business with the State (Tiempo Nuevo, Bernardo Neustadt, YouTube), others were the violent women of the seventies, who crossed sides: “Bullrich : from montonera to gendarme Pro” (Noticias.perfil.com 09/07/2017)During 2018 they did not hesitate to embarrass businessman Paolo Rocca by sending him several times to Comodoro Py: “the 7 signs that Claudio Bonadío considered to prosecute him” (Infobae, November 28, 2018). We saw the video where, during Heidi’s government, the Bank of the Province of Buenos Aires proposed to form an anti-union Gestapo (perfil.com, 11/06/2022) But with that and everything, the truth is that we are a wonderful country . It hurts us when a part of our citizens, who do not know the history, the actors, or the country’s resources, repeats the soporific rosaries of the comparsa’s scriptwriters.

A country of two million eight hundred thousand square kilometres, far from the current potential places of nuclear war, with freedom of worship, eighty percent of its land is arable, crops that multiply year after year, the second largest reserve of drinking water, in little time self-sufficient and exporter of energy, mining, lithium, semi-industrialized country, enjoys four marked seasons, great variety of climates, can raise up to two harvests in a year. Ordinary Argentines greet each other with a kiss on the cheek, we get together to eat barbecue, listen to tango, and until the pandemic, we shared mate in circle. Not to mention the excellent human resources.

Our professionals today shine throughout the planet, five Nobel Prize scientists, doctors risked their lives in a pandemic, rural teachers are an example of commitment without resources.

The fusion of neoliberal ideology with angry politics today offers a type of rigged and totalitarian disclosure, it is the very expression of politics that is in motion, as a will to siege what is national and popular. They try to create cohesion and enthusiasm among the angry. It is a war to raise up a new type of soldier, like the four accused of the Federal Revolution. The media appealed to naive credulity and sentimental Manichaeism. The actions of guillotines, body bags and gallows drink a lot from the sources of the history of the 1930s in Europe. There are even musical groups that ask to return to 1936 in Spain, alluding to the coup against the Republic that led to the Spanish civil war. There an Argentine deputy danced with music from the Meconios on the same stage. The world knows how that gigantic machinery that dominated Europe until 1945 ended.

A large part of the technique and procedures of these false “crazies on the loose” (they said: “and we repeat the same thing that the television repeats all day), that is, they come from the climate of delirium and hatred that they were inoculated with.

There are communicators who took care of their jobs, others today are rich, preaching a fanatical anti-Peronism. In 2018 (Julio Blank), a serious journalist declared: “We did war journalism. We lost the capacity of the tones, we resigned it or it did not work out for us to maintain the tone at a certain moment, especially in recent years.”

However, it seemed like a formula destined to destroy the vice president and the entire Peronist environment. The pseudo-journalists corrupted the conception of information and communication with repeated phrases such as: “everything was stolen”, “2 PBI were stolen”, or they announced in advance-at a night table-who they were going to charge or prosecute in Comodoro Py , the channels reproduced an excavator looking for imaginary treasures hidden in the southern desert, again Paolo Rocca getting out of his car to testify in court, they showed how they broke the walls of the CFK apartment, they exposed former Vice President Boudou detained in pajamas with wives, said they received tapes while running through Palermo. That ruling party corrupted journalists who even today keep their allies armored.

It would be necessary to make history of the successive lies that were made for so many years for dissemination purposes, because: “Modern man is amazingly willing to believe” said Mussolini.

Chronicle of an announced attack

A permanent debauchery with imprecations, threats, inconsistent predictions, sometimes they were so preposterous that they could not be admitted by all citizens; but it was obvious that, in some groups, all that exaltation would reach a point that would make them act without thinking.

At some point, communication ceased to be linked to a political tactical progression, to become a tactic in itself, a specific industry with its codes. It was and is, a true psychic artillery in which everything that has a persecution value is used, and in which finally, as long as the message has an effect, the truth ceased to be a central theme.

The ideologues of 2015 had understood that the condensation of a part of the undocumented citizenry would buy the construction, then they sold the corporations immense possibilities and convinced them. “For the most part, the people are in a state of mind and spirit…, that their opinions and actions are determined much more by the impression produced on the senses than by pure reflection” (Hitler).

This is cognition, the dominance of image over explanation, ranging from the sensibly brutal to the rational. They have made use of all the profitable subjects, to which a minimum coincidence with their intentions of the moment would be useful. The press, the communicators, the environmentalists, related politicians repeated the same thing endlessly, twenty-four times seven (synchronized swimming they call it now).

It is undeniable that both the current situation of the Argentine economy, after the unprecedented financial crisis of the Macrista government, contributed and continue to contribute to the anger. What happened in Recoleta reveals many things, but it explains the influence they exerted on an uncultivated youth. For the constant handle to have been able to penetrate so deep despite the contradictions and excesses, it must be said that its action was focused on the unconscious, in the area of ​​passions and irrational habits, that is where they found a foothold.

Let’s put Peronism (the sugar cube) in front of a visceral anti Peronist and it will secrete saliva like Pavlov’s dog. Now let’s associate (CFK) with Peronism and let’s do it permanently. Cristina Fernández de Kirchner became the “conditional agent” (the bell). The conditional agent (CFK) tends to lose its value as much as the “simple conditional agent” (Peronism) if they are not associated again and again, that is, if the primitive experience is not repeated at intervals. Now just limiting himself to ringing the bell (CFK) without showing the sugar cube (Peronism), Pavlov’s dog will secrete saliva.

Remember the story of “the last 70 years”-alluding to Peronism-and “the most failed society in the world”-according to the most failed president of democracy-They point to Peronism, not to Cristina. As Néstor Kirchner said: “they call us Kirchnerists to lower the price”. Then the former president who cannot shut up when he relaxes in his biosphere, is sincere and finishes: “We were the first with Perón and Evita and we are going to be the first to end populism”. She hasn’t read much, and in her environment she doesn’t have enough help. Populism existed when Perón was not yet born (1874 “naródnik intelligentsia”, the Russian populists of the second half of the nineteenth century and the American populists of the last two decades of that same century).

Some club directors and businessmen provided contacts with part of the judiciary. “The appointment as a member of the Judicial Council of a person who represents the interests and businesses of Daniel Angelici and gambling is a violation of the republic, and of the model of justice that is intended to be carried as a flag” (Elisa Carrió, 15/ 09/2022) It’s not enough, they tried to appoint two judges who are probably folderable for the Supreme Court. By the way, all lawsuits from either side are referred to Commodore Py’s vacuum cleaner.

The espionage addicts contributed their systems and methods, that is: all the files of incriminating folders of judges, official and opposition politicians, businessmen, trade unionists and family members; who-at least-are afraid of being blackmailed. They used all this without modesty, with the most complete contempt for human beings. Elisa CarriodHe stated on the air of Mirtha Legrand’s program that he had been a victim of illegal espionage during the Macri government. He publicly insists that was the victim of maneuvers by people from his own government.

Before, he had targeted the then Minister of Security and current president of the PRO, Patricia Bullrich, for changes in her custody with the alleged purpose of spying on her. But now he targeted the leadership of the Federal Intelligence Agency (AFI) of the macrismo, made up of Arribas and Silvia Majdalaniand also pointed to the former chancellor George Faurie (Profile.com 10/19/2022). ANDhe book “Hermano”, by journalist Santiago O’Donnell, states Mariano Macri that his family engaged in illegal espionage maneuvers and that Macri made this activity a habit. Nancy Pazos harshly imputed Mauricio Macri and the macrismoto the who accused of being “abuser”. “When Macri sent my children to spy, it was my limit, and it is very clear that they were not self-employed”, revealed the journalist and ex-wife of the deputy PRO Diego Santilli. Curiously, her ex-husband left the forum.

Cheer up, Being Argentine is an honor!

We are welcome in all parts of the world. In the most prestigious universities, in world congresses, in international corporations.

Don’t be fooled or feel bad, we all have a political position. And we all have garbage in our same spaces. However, this is not incompatible with objectivity in the analysis. Let’s participate in discussions, after reading books from both sides of the library. We can make things that are wrong change and things that are right take hold.

Exchange of tax information with the US: keys to take into account