Field: despite the drought, is it possible to project a record 2023 in exports? 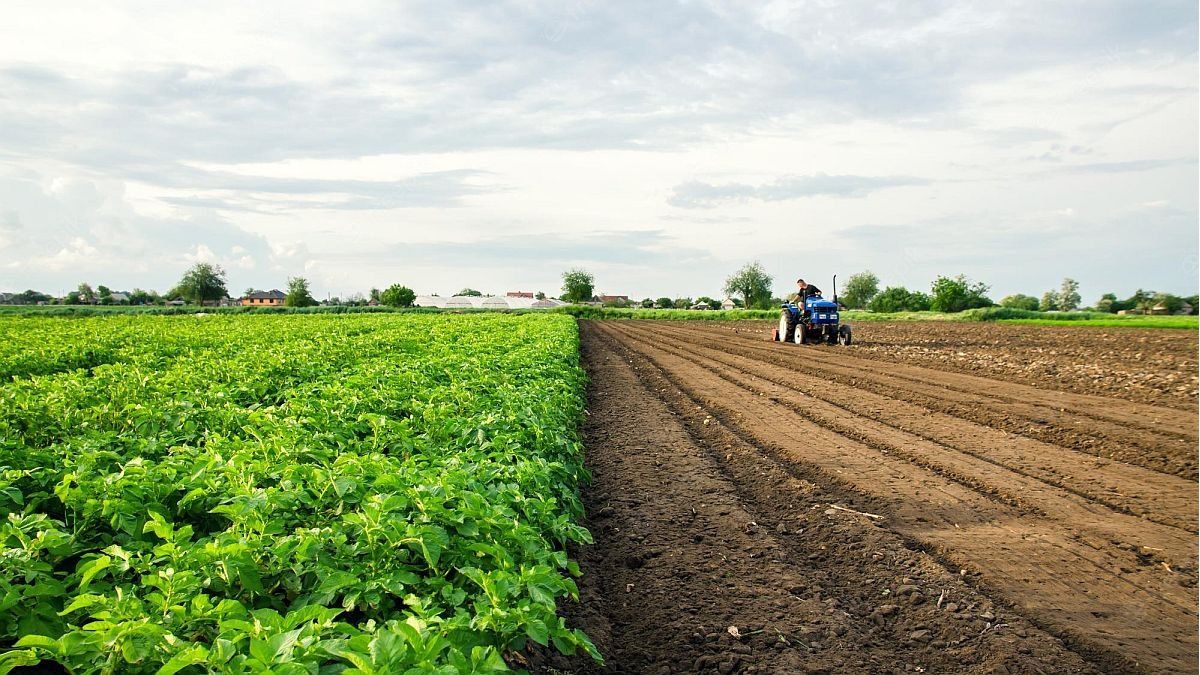 By way of illustration, with hard data from INDEC, it is obtained that, of the total goods exported in 2022, more than 65% of foreign exchange income corresponds to agricultural raw materials and agro-industry.

Among these, which include grains, meats, agricultural machinery, inputs, etc., the soybean, corn and wheat complex (grains, oils, flour, biodiesel, seeds, etc.), represents 65% of the total agro-industrial products exported, and accounts for almost half of the country’s total income from exports of goods .

As is public knowledge, the 22/23 harvest will not be good, in the third consecutive drought in the country. The second season with drought, 21/22, showed a reduction in export volume of -11% for the soybean complex and -10% for the corn complex, while the wheat complex increased its export volumes.

Given that during 2022 the average export prices of grains and by-products had values ​​higher than those of 2021, the lower exported volumes were offset by a higher value of the exported ton, resulting in a higher foreign exchange income, accelerated towards the last month of the year. 2022 through the program soybean dollar II.

The graph shows a lower number of tons exported during the period January to November 2022, compared to the same period in 2021, but a greater number of dollars entered.

Font: INDEC and Ministry of Agribusiness

The wheat crop 22/23 managed to collect volume by 12.4 million tons, -43% below the volume harvested last year. In this regard, in November 2022 a resolution was published that gives permission to the export sector to postpone the fulfillment of wheat exports for up to one year, in order to guarantee the local supply of this cereal. It is projected that the export of wheat 22/23 will not exceed 5 million tonswell below 14 million exported in 2022, the postponed commitments must be coordinated to be fulfilled with the 23/24 harvest.

The soybean and corn harvest volume projections will be adjusted as the campaign progresses, with damages already surveyed and measured in the first half of the cycle. According to the Grain Exchange of Buenos Aires, a pessimistic scenario would result in a cut in the corn and soybean harvest below 30% and 20% respectively, compared to the 21/22 harvest. It means that the harvest of soy would reach a volume of 35.5 million tonsand of corn 37.8 million tonscompared to 43.3 and 52 million for soybeans and corn 21/22, respectively.

Turning to the probable export prices, it is recalled that 2022 was crossed by very high price ranges, sometimes exceeding historical international records. The 2022 seasonings for a scenario of high prices were diverse, in which geopolitics had a lot of weight, through the war between Russia and Ukraine, logistical difficulties and sanitary barriers for a normal supply from supplier countries to consumers, the energy context and of fertilizers, to mention the most important ones that caused historical maximum prices, impacting the local prices of grains and by-products.

2023, however, is projected to be a stabilized year in trade negotiations between the countries in conflict, although surprises can always occur. As regards energy and inputs linked to them, the projections show a year of lower prices, mainly due to threats of a global economic recession, which slows down any rise. Finally, the production of the main producers in the world, except Argentina, is projected to be optimal, with which the global harvest is not threatened. 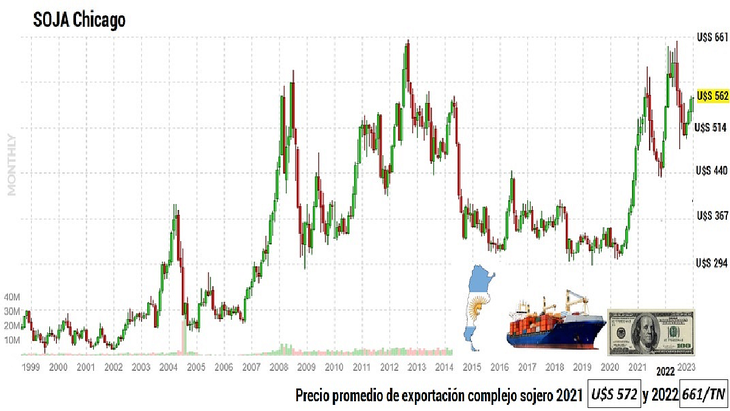 The long-term graph that shows the evolution of soybean prices in Chicago from 1999 to January 2023 shows the maximum prices reached during 2022, only recorded in 2012. Both 2021 and 2022 showed price peaks in Chicago, and, when the range of prices prevailing during the last two years is compared, with respect to the average export price of soybeans and by-products, there is a broad relationship between the 2021 and 2022 price differential for Chicago soybeans, which went from a range Come in $440 Y US$560 per ton in 2021 to one between $514 Y US$660 per tondistanced by $75 a $100 between minimums and maximums, and the average export price differential 2021 versus 2022, $89 per ton.

If this relationship is maintained, considering that the largest destination of the oilseed complex is export, and whose reference market is Chicago, and international prices fall to the level of 2021, considering an optimistic scenario (very good harvests are expected in South America, excluding Argentina, which would put even more downward pressure), there would be a price cut that, added to the cut in soybean production, would result in an income of US$20,000 millionsome US$14 billion below with respect to the 2022 income.

The same projection can be made with the corn agro-export complex, whose average prices went from $227 a $262 per ton, in 2021 and 2022 respectively, accompanying international record prices rising in 2022, as in soybeans. If the projected 2023 production cut were transferred to a similar cut in exports for this complex, it would result in a foreign exchange inflow of US$5.4 billionsome US$3.6 billion below compared to 2022.

Finally, exports from the wheat complex are not projected for more than five million tons. If the average export price for 2023 were similar to that of 2021, US$257 per tonunder the $313 in 2022, would result in an inflow of foreign exchange for almost US$1.300 millionalmost u$3 billion less than foreign exchange income 2022.

Losses could reach almost $21 billion in 2023, due to production cuts due to the drought, and due to price cuts, due to the international context of lower demand and a good level of agri-food supply.

The dangerous thing about the current situation is that these projections are underestimated by those who must design public policies, with knowledge of the scarcity that they will face during the quarters of this 2023.

That record export projections for 2023 be published, when more than 40% of the currencies correspond to the wheat, soybean and corn complexes, whose production could be one of the poorest in the last seven years, with international prices that could take a different course bearish, even below 2021 prices and far from 2022 highs, is reckless to say the least.

Do not underestimate the drought or the recessive international context, given the international payment commitments of the State and the need to manage financial tools on the part of the companies, when the 23/24 sowing seeks liquidity and cannot find it.

The fact is that the weather is sovereign when it comes to determining yields, that the loss of wheat is an advance of what will happen with soybeans, corn and the rest of the spring summer grains. The fact is that Argentina being an agro-exporting country, we are international price takers, influenced by events far beyond local limits, which show more probabilities of declines than rises, after two years of upward force, good world grain production and a picture of global recession.

The story is that the drought will not have such a strong impact and that 2023 exports will be record. Data kills story, and this data must be put on the table of those who make government, sectoral and business decisions, in order to manage the scarce resources that are not yet exhausted.