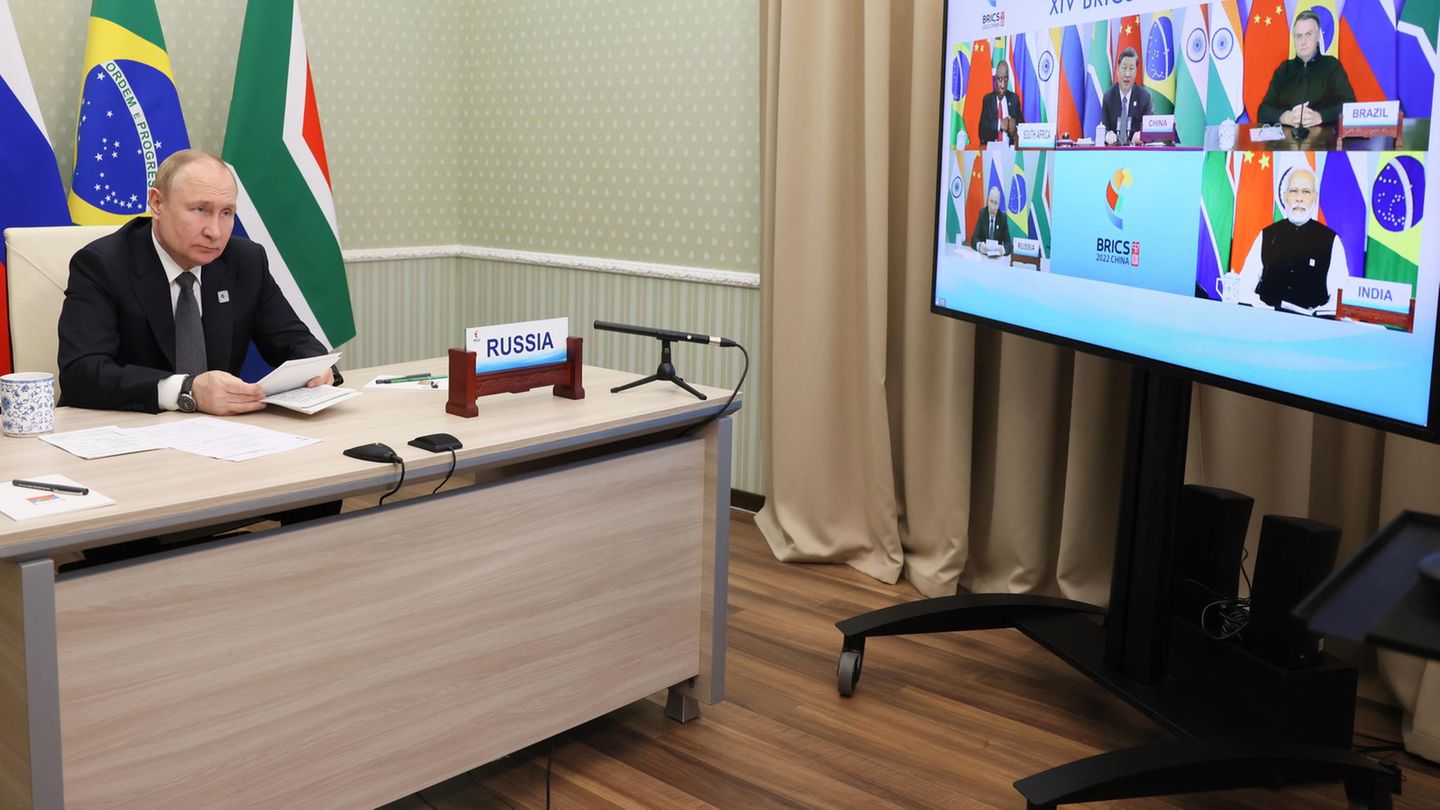 As European leaders ponder the pros and cons of Ukraine’s EU accession, the Kremlin is rallying its most important allies. The virtual meeting of the Brics countries is intended to show the West that we can do it without you.

China invites, the autocrats come. The heads of state met on Thursday Brazil, Rrussia, Iindia, China and Ssouth africa interconnected. Actually, the Brics states, ruled by populists with striking frequency, meet once a year to spice up their economic relations. Now it is the first time that the economically best friends have met in Ukraine since the beginning of the war. So their chat probably revolves mainly, albeit unofficially, around one topic: Western sanctions against Russia. After all, they contradict “common sense and elementary economic logic,” said Russian President Vladimir Putin on Wednesday in his video greeting at the economic forum.

At the meeting itself, Putin accused the West of selfishness. The world economy fell into crisis “because of the ill-considered, selfish actions of individual countries, which use financial mechanisms to pass on their own macroeconomic mistakes to the whole world,” said the Kremlin chief on Thursday.

According to the US financial magazine “Investopedia”, the acronym Bric (initially without South Africa) goes back to the economist Jim O’Neill from Goldman Sachs. More than 20 years ago, he predicted that the four emerging countries would dominate the global economy by 2050. From 2010, South Africa also took a seat at the table of tomorrow’s makers.

A look at the numbers shows how much power is gathered at the virtual table on Thursday. Around three billion people live in the Brics States, more than 40 percent of the world’s population. Taken together, their gross domestic product accounts for almost a quarter of global sales. In fact, Brazil, India, China and South Africa have been among the fastest growing economies for years. Russia, on the other hand, casts a far larger shadow than it deserves. For comparison: In 2020, the German economy more than doubled that of the supposed world power.

Ultimately, the superpower China is decisive. The economy of the People’s Republic already exceeds that of the other four participants by dimensions. China’s economy is expected to continue growing rapidly over the next five years: in 2027, GDP will then be more than 29 trillion US dollars. That would lay the country .

Band together for profit

In addition to their constant striving for economic recovery, the swelling five have one thing in common: their aversion to the US-dominated West. No wonder, then, that none of them have so far clearly condemned the Russian invasion of Ukraine.

This is very convenient for Putin – without alternative markets, the Kremlin would not be able to keep its war machine running. “The volume of deliveries of Russian oil to China and India is increasing noticeably,” the Kremlin chief noted in his welcoming address. As the “” reports, Russia’s income from oil exports increased by eleven percent in May. In fact, India in particular turns out to be one of the biggest winners of the war. Indian refineries buy cheap crude oil from Russia at a bargain price, refine it and then ship it all over the world without sanctions – most likely also to the West. With huge profit margins (read more here). According to Putin, negotiations are also under way to open Indian chain stores and increase the share of Chinese cars and technology in the Russian market.

Not the content, but the symbolic power of the meeting is decisive

Although Beijing continues to maintain its often-vaunted “rock-solid” friendship with Moscow and Brazil presents itself as a benevolent mediator, the Brics states are also suffering from the massive economic consequences of the Russian invasion. As the BBC writes, however, the war also offers them the opportunity to present themselves as helpers in need to developing countries, which are particularly suffering from the rising prices of inflation, and to make them economically dependent on them.

Putin and Xi Jinping are likely to agree on a tougher course against the West. India, on the other hand, feels quite comfortable with its economic tightrope act and doesn’t want to alienate either West or East. In any case, analysts believe that China’s supremacy in Delhi is a thorn in its side. Together with the USA, Japan and Australia, India forms the so-called Quad Alliance. The quartet of leading democracies in the Indo-Pacific region wants to reduce China’s influence in the region.

Ultimately, at the meeting of the autocrats, it is less the content that is decisive, but much more the symbolic power. Putin can show the world what powerful friends have his back. It’s a not-so-subtle message to the West: Look, we can do it without you.