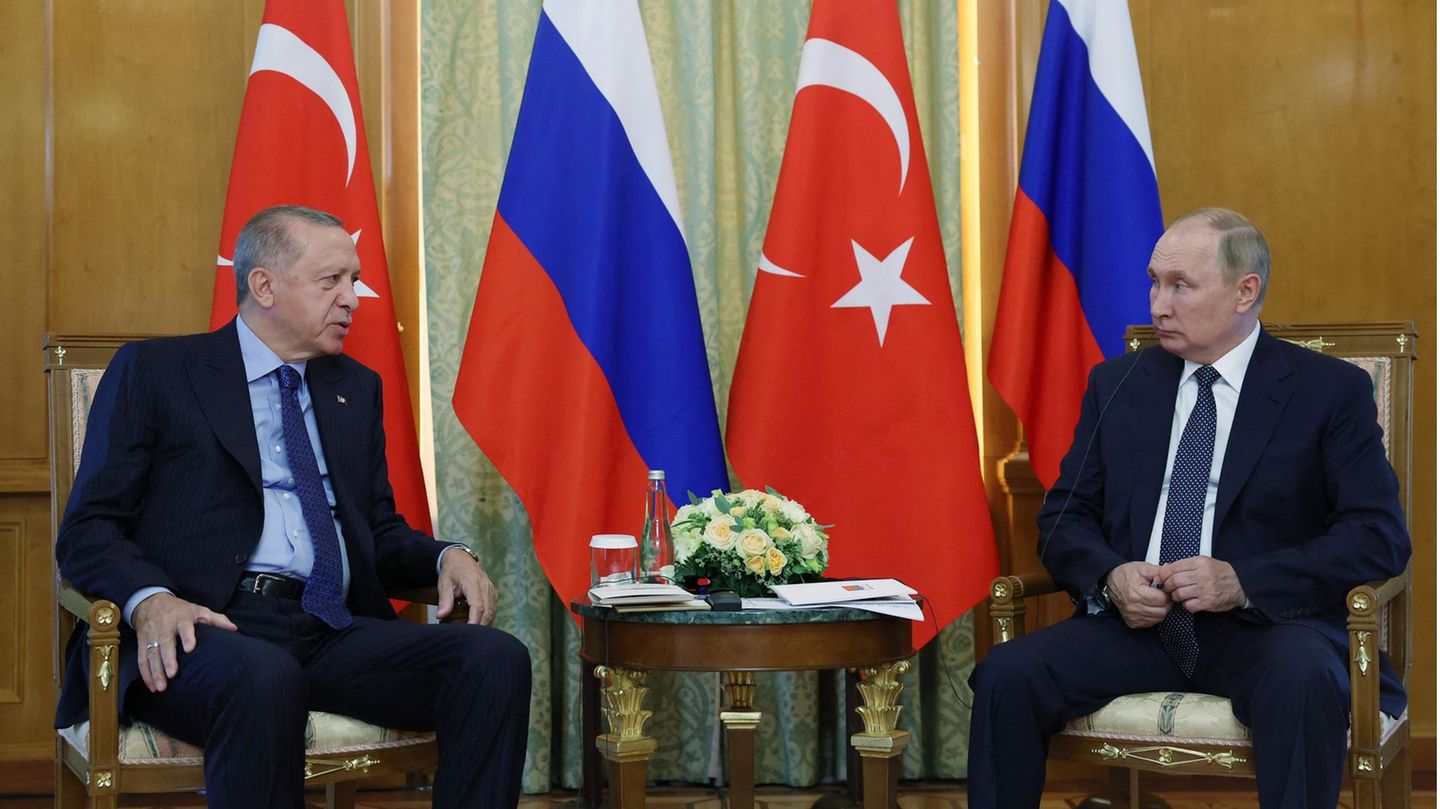 The buzzwords at the meeting of the Russian and Turkish presidents were tough: Syria, combat drones, Ukraine war – but the big bang didn’t materialize, at least for the time being. Instead, Turkey and Russia agreed to cooperate more closely on the economy and energy.

According to the Kremlin, Russian President Vladimir Putin and Turkish President Recep Tayyip Erdogan have agreed on increased cooperation on economic and energy issues. According to the Kremlin, at their meeting in Sochi on the Black Sea, the two agreed to expand relations between the two countries “despite the current regional and global challenges”. This includes an expansion of trade relations and increased cooperation in the fields of business and energy.

“Very important decisions” were made in the area of ​​trade and the economy, said Russia’s Deputy Prime Minister Alexander Nowak, according to the TASS agency. For example, the conditions for cooperation are to be made easier for Russian and Turkish companies.

The Turkish nuclear power plant Akkuyu, which is being built by a Russian state-owned company, was also discussed at the four-hour meeting, Nowak said. In addition, both sides had agreed that Turkey would in future pay for Russian gas in rubles. Putin and Erdogan also confirmed their willingness to implement a recently concluded agreement on the export of Ukrainian grain. The need to “ensure full implementation of the package agreement” was stressed, Russian agencies quoted from a joint statement by the two heads of state.

Erdogan didn’t seem uncomfortable with the limelight during his visit to Russia. “Now the world is looking at Sochi again,” he said at the beginning of the meeting with Russian President Vladimir Putin. Both countries previously announced that the meeting should focus on current regional and global events. It was expected that, in addition to the Ukraine war, the situation in Syria and possibly cooperation with Turkish combat drones would also be discussed. In the evening, however, journalists from the state news agency Ria Nowosti said that the two presidents had not addressed the issue.

Turkey and Russia maintain a partnership that is primarily characterized by strategic interests. Daria Isachenko from the Science and Politics Foundation calls it “a very sensitive network of connections”. Turkey depends on grain, energy and tourists from Russia. In 2020, almost 34 percent of Turkey’s gas imports came from there. Russian gas pipelines run through Turkey. Turkey is also not participating in Western sanctions against Russia, which increases the country’s importance for Russian companies, for example.

The Russian foreign policy expert Alexei Puschkov, for example, praised Erdogan for representing the interests of his own country “in contrast to the euro politicians” and not being afraid of “confronting the collective West.” At the same time, both countries are on different sides in conflicts such as in Syria, Libya or Nagorno-Karabakh, without taking direct action against each other.

This is one of the reasons why Turkey is likely to depend on the green light for another Syria offensive. Hüseyin Bagci, head of the Turkish Foreign Policy Institute, told the DPA news agency that Erdogan traveled to Russia because he had not yet received what he wanted – namely an agreement for another offensive in Syria. The Turkish President has been threatening this for several weeks. Without the consent of Russia – in the Syrian civil war on the side of the regime – Ankara should not dare to take this step. So far, however, Moscow has clearly advised Turkey not to do so.

Turkey argues the offensive is necessary to counter the “terrorist” threat. Observers, on the other hand, suspect strategic electoral action behind a renewed offensive. Analyst Deniz Kalyoncu agrees: “Elections will be held in Turkey in 2023 and the polls say that Erdogan needs a new story to touch people. That’s one of the reasons why he thinks the Syrian mission is so urgent. “

Before the talks began, Putin praised his guest for Turkey’s mediation in the grain crisis, referring in particular to the additional declaration of intent with the UN, which is intended to promote the export of Russian food and fertilizers. “Thanks to your direct participation and the mediation of the UN Secretariat, the problem (…) of Ukrainian grain deliveries from the Black Sea ports was solved. Deliveries have already started, for which I would like to thank you,” said Putin. He also praised Ankara’s role in transporting Russian gas to Europe through the TurkStream pipeline. European countries “should be grateful to Turkey for ensuring uninterrupted transportation of Russian gas,” Putin said.

Second meeting within a week

Agricultural exports via the Ukrainian Black Sea ports had recently been blocked for months because of the Russian war of aggression. War opponents Ukraine and Russia signed an agreement separately with Turkey on July 22, through UN mediation, to allow grain exports from Ukraine from three ports.

It is the second face-to-face meeting between the two heads of state within a month. This is particularly remarkable in Putin’s case, since the Kremlin boss, who is increasingly isolated in the world, only conducts many of his conversations on the phone or via video link.

Ankara maintains close ties with both Moscow and Kyiv. Erdogan has sharply criticized Russia’s invasion, but has always emphasized that he does not want to give up any of his partners.

Therefore, one prospective topic of conversation in particular had attracted attention. According to the Kremlin, the meeting should also discuss military-technical cooperation. Moscow recently showed interest in the Turkish combat drone Bayraktar TB2, which was also successfully used by Kyiv during the war. CNN quoted Turk Erdogan as saying that Putin had suggested working with Turkey on the Baykar drones. Should Russia develop the drones together with Turkey, Moscow would also have access to the technology of a NATO member state.

Shortly after the start of the Russian war of aggression, Erdogan said he would not rule out arms deals with Russia. However, Baykar chairman Haluk Bayraktar told CNN International in mid-July that Russia had not been supplied with drones and “never will”. “We support Ukraine.”

Arms deals with Russia have brought sharp criticism to Turkey in the past. In 2017, Ankara acquired the Russian S-400 missile defense system. The United States had imposed sanctions under then-President Donald Trump for this reason. Turkey was also excluded from an important armaments project.