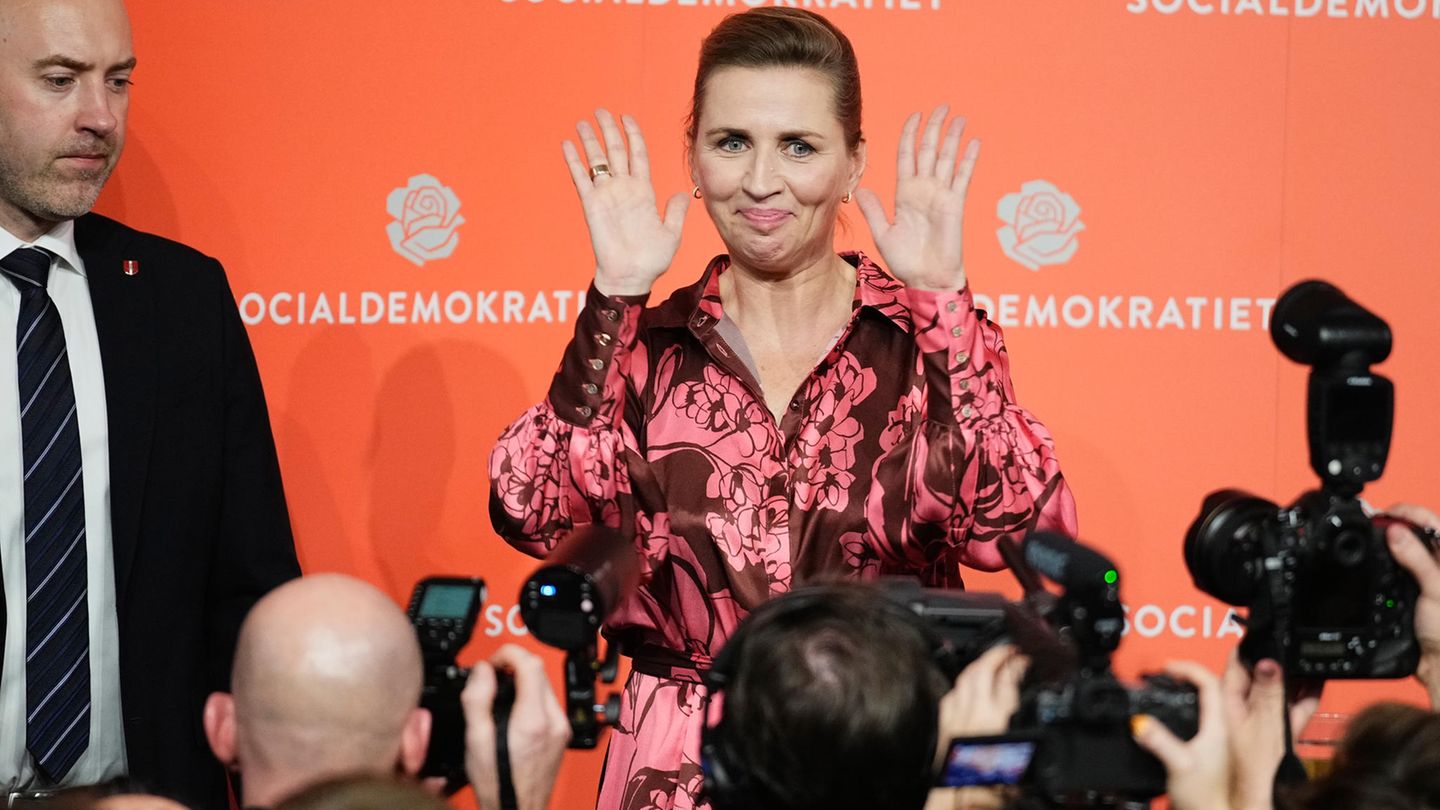 What a memorable election night in Denmark! Only at the very last minute does the tide turn in favor of Prime Minister Mette Frederiksen. But that’s not the end of the drama.

After a dramatic election night, Denmark is faced with the search for a new government. Despite a last-minute majority for the left-wing camp around her ruling Social Democrats, Prime Minister Mette Frederiksen announced on election night that she would submit the resignation of her minority government on Wednesday. In doing so, she wants to pave the way for exploring the possibilities of the broad government she is aiming for with parties from both political blocs. Such a form of government is rare in Denmark – but according to Frederiksen, given the current crises, it is exactly the right thing.

The Social Democrats were again clearly the strongest force in the election with 27.5 percent. They had their best election result in 20 years, Frederiksen told party supporters in Copenhagen early Wednesday morning. But: “It is also clear that there is no longer a majority behind the government in its current form.” She therefore wants to go to Queen Margrethe II on Wednesday and submit her government’s application for resignation. If a majority of the parties chooses her as exploratory commissioner, she will examine whether a broad government can be formed. Such a constellation would be good for Denmark, Frederiksen confirmed.

Germany’s northern neighbor had previously experienced one of the most dramatic election evenings in its history. Forecasts and projections had long indicated that neither the red, left-wing camp nor the blue, center-right coalition would win a majority. At the time, the key role between the blocs was held by former Prime Minister Lars Løkke Rasmussen with his new centrist-liberal party, The Moderates. After counting all the votes cast in the country, the picture tilted to the left at the very last minute: the red block jumped to 87 mandates, while the blue block came to 72, 16 go to Løkke’s moderate.

90 of the 179 seats are necessary for a majority in the Danish parliament in Copenhagen. 175 of these mandates are awarded in Denmark, two each in Greenland and on the Faroe Islands, both of which are officially part of the Kingdom of Denmark. The Faroese mandates were already split between the two blocs on Monday. As in the last six elections, the two Greenlandic mandates went to the red block early on Wednesday morning after almost all the votes had been counted. The left camp should end up with exactly 90 mandates.

During the election campaign, however, Frederiksen emphasized several times that he was striving for broad government cooperation across the political center. However, a red majority should significantly improve their negotiating position in this respect: If the moderates from Løkke standing between the blocs or parties of the blue bloc do not respond to their demands in the possible negotiations, they could put great pressure on them with the prospect of doing so instead to set red camp.

These left-leaning parties are already supporting Frederiksen’s previous purely social-democratic minority government in parliament. In some things, such as her strict immigration policy, Frederiksen often relied on voices from the right. After the Russian invasion of Ukraine, there was also cross-bloc cooperation on military issues, and there was also recent cooperation in supporting the Danes in the fight against the sharp rise in energy prices.

Is there chemistry between Frederiksen and Løkke Rasmussen?

A central question in the future government negotiations will be to what extent Frederiksen can cooperate with her predecessor Løkke. He was Prime Minister from 2009 to 2011 and from 2015 to 2019. He left the liberal-conservative party Venstre in 2021 after decades. After that, Løkke founded the moderates, who will now be the third strongest force on their debut with a provisional 9.3 percent of the vote.

Venstre, who leads the center-right alliance, on the other hand, lost heavily: after 23.4 percent in the last election in 2019, Løkke’s ex-party was only 13.3 percent this time. However, it remains the second strongest force behind Frederiksen’s Social Democrats.