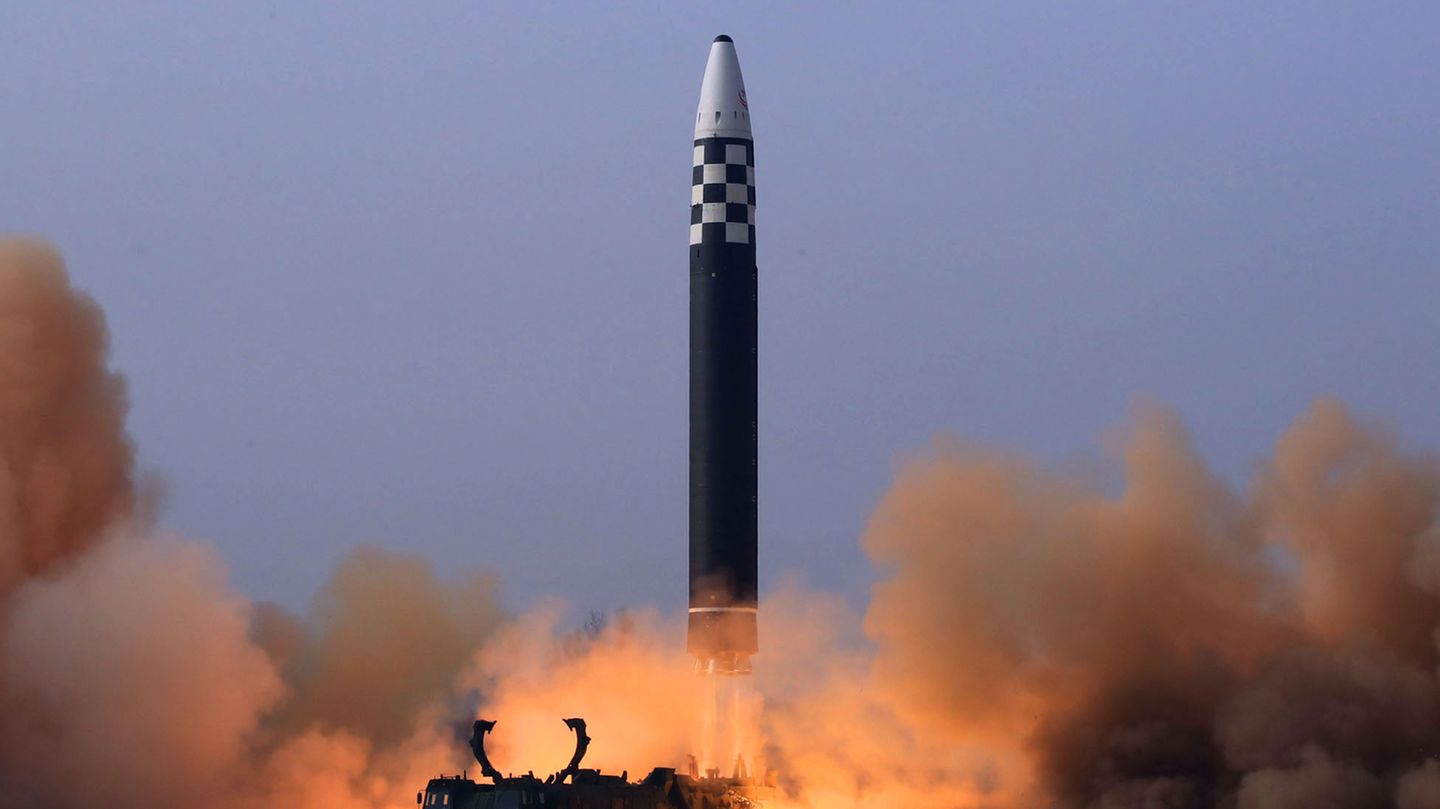 North Korea has tested three ballistic missiles. Both South Korea and Japan report this. The US accuses North Korea of ​​violating several UN resolutions with the missile tests.

North Korea launched three ballistic missiles toward the open sea on Thursday morning (local time), the first of which may have been an ICBM, the South Korean Armed Forces General Staff said. He initially did not confirm reports by South Korean media that the test of the multi-stage rocket failed due to problems after the launch phase.

There was also some ambiguity in South Korea when it came to determining the type of missile. According to the Office of National Security of the Presidential Office, it could also be a so-called longer-range medium-range missile (IRMB), reported the South Korean broadcaster KBS. According to the military, the missile flew about 760 kilometers at an altitude of up to 1920 kilometers.

Both types can serve as carrier rockets for nuclear weapons, the testing of which the self-declared nuclear power North Korea is prohibited by UN resolutions. ICBMs include missiles with ranges of at least 5,500 kilometers. The other two missiles shot down by North Korea in an easterly direction on Thursday morning are said to have been short-range missiles.

The latest North Korean missile test also caused confusion in Japan, where Federal President Frank-Walter Steinmeier was staying before his onward journey to South Korea in the evening. The government in Tokyo had previously corrected initial information that the first longer-range rocket had flown over Japan. The missile disappeared from radar over the Japan Sea. There has been no damage in Japan from the missiles. Residents in some northeastern and central Japan prefectures had previously been asked to remain in their homes for safety.

Defense Minister Yasukazu Hamada said the first missile was launched around 7:40 a.m. local time. The potential trajectory could have sent the missile flying over Japan. But she disappeared from the radar over the Japan Sea. The reason for the disappearance from the radar is still under investigation, it said. On October 4, a North Korean missile flew over Japan.

The US has condemned the alleged launch of an ICBM by North Korea. The shooting down was a “clear violation of several UN Security Council resolutions,” said US State Department spokesman Ned Price on Wednesday (local time). The action shows the danger North Korea’s illegal WMD and ballistic missile programs pose to its neighbors and the region, as well as to international peace and security.

Together with the international community, the United States called on North Korea to refrain from further provocations and to engage in dialogue, it said. The commitment of the United States to the defense of South Korea and Japan remains “iron”. The US National Security Council said President Joe Biden and his national security team are reviewing the situation in close coordination with their allies and partners.

North Korea has increased its missile tests since September

Despite international criticism, North Korea has been carrying out missile tests at an unusually high frequency since the end of September. According to the South Korean military, the country had fired more than 20 rockets on the east and west coasts throughout the day on Wednesday. Of these, a short-range missile crossed the eastern maritime border between the two countries. South Korea’s military responded accordingly and, according to its own statements, fired three air-to-surface missiles from fighter jets into the open sea north of the border line.

The new North Korean missile tests were also seen in South Korea as a response to the largest air force exercise by South Korean and US forces in several years. North Korea had accused the two countries of “reckless” military provocations and threatened countermeasures. The multi-day exercises in South Korea will continue until Friday.