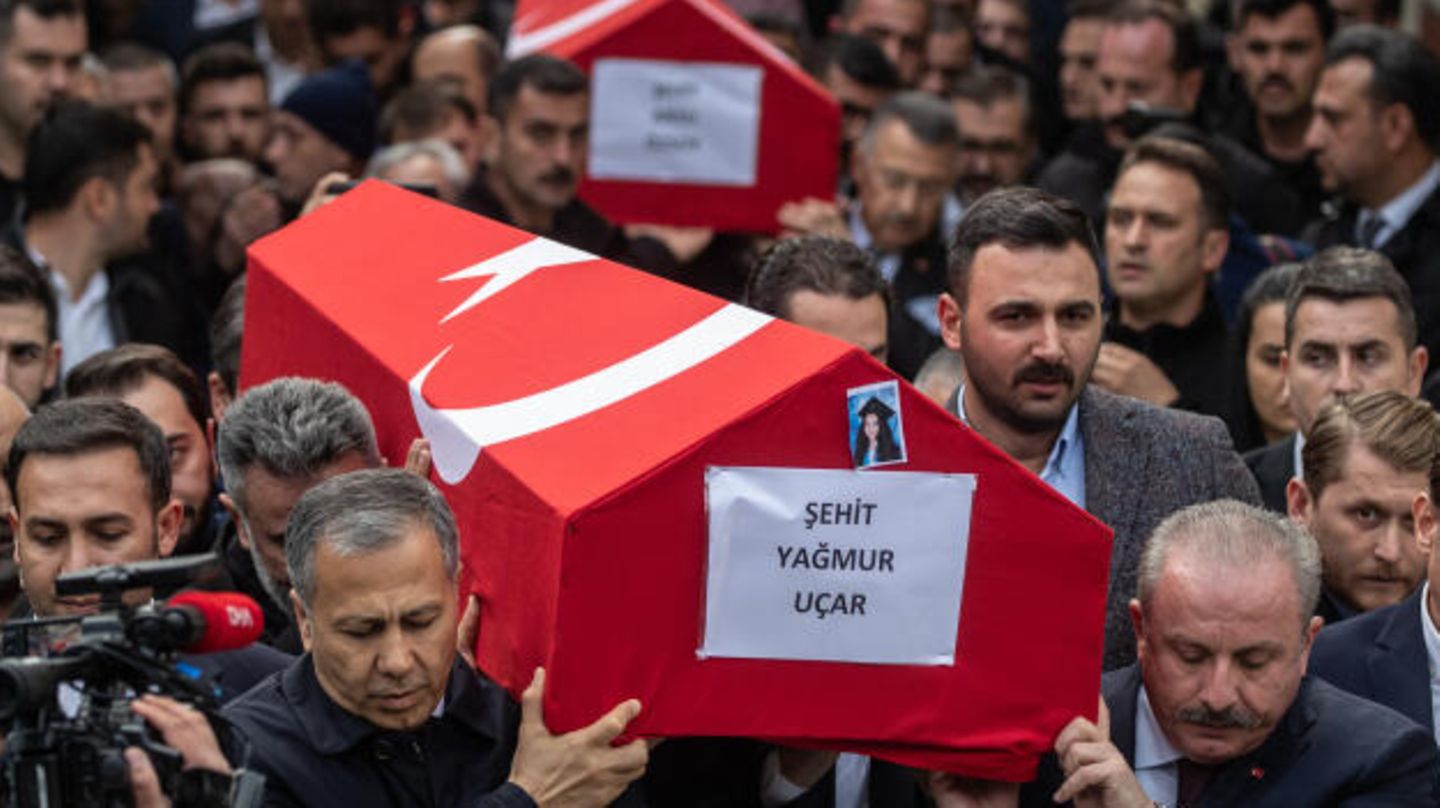 After the attack in Istanbul, the police blamed an alleged PKK supporter from Syria. An accusation that the banned workers’ party immediately rejects. Meanwhile, the six victims were buried at a funeral ceremony.

Turkey has blamed an alleged supporter of the banned Kurdistan Workers’ Party (PKK) from Syria for the attack in Istanbul. According to Turkish media reports, the police announced on Monday that the arrested young woman, a Syrian citizen, had confessed to the crime. She admitted to acting on behalf of the PKK and to having received her instructions in Kobane in the Kurdish region of north-eastern Syria. The PKK and the Syrian Kurds have denied any involvement in the attack.

The young woman, named Alham Albashir, is said to have entered Turkey illegally via the city of Afrin in northeastern Syria, which is controlled by Turkish soldiers and their allies. Police footage circulated by Turkish media showed her being taken away from an apartment in a suburb of Istanbul wearing a purple sweatshirt.

Istanbul: Six dead and more than 80 injured after attack

Six people were killed and 81 others injured in the bomb attack on a busy shopping street in central Istanbul on Sunday afternoon. According to the police, the explosive device consisted of “highly effective TNT”.

Turkish Interior Minister Süleyman Soylu announced the arrest of a total of 46 suspects and announced further arrests. “You wanted to send us a message, we received it and we will answer it with all determination,” he said on Monday, referring to the PKK during a visit to the site of the attack.

So far, no group has confessed to the crime. Soylu had previously blamed the PKK and later also the Syrian-Kurdish military units of the YPG for the attack. “We assume that the order for the attack was issued from Kobane,” said the minister.

Both the armed PKK organization and its political wing, as well as the Syrian military alliance SDF, led by Kurdish YPG units, firmly denied the allegations. “Our people and the democratic public know very well that we have nothing to do with this incident, that we are not directly targeting civilians,” the PKK said. “We assure that our forces have no connection to the Istanbul explosion and we reject the allegations against them,” stressed SDF commander Maslum Abdi.

The PKK, for its part, accused the Turkish government of having “dark plans” and wanting to report “Kobane as a target”. In the months before, Ankara had repeatedly announced that Turkey would launch a military offensive against the Kurdish areas in northern Syria. However, other NATO countries, including the USA, as well as Russia and Iran, had warned Turkey of such an attack.

The YPG is backed by the US and played a crucial role in expelling the Islamic State (IS) jihadist militia from Syria and also from Kobane. Turkey, on the other hand, accuses the YPG of being an offshoot of the PKK and therefore also classifies it as “terrorist”. Turkey has been trying for years to set up a “buffer zone” in the Kurdish area on its border with Syria and to expel the Kurdish units from there. Turkish President Recep Tayyip Erdogan has repeatedly accused Washington of supplying arms to Kurdish “terrorists” in northern Syria.

Expressions of condolences from the USA after the Istanbul attack were also rejected by Turkey. “We do not accept the condolence message from the US embassy – we reject it,” Soylu said on Turkish television.

Chancellor Olaf Scholz (SPD) also sent his condolences to the Turkish President on Sunday and expressed his dismay at the explosion in Istanbul on Twitter.

The PKK has been fighting for more rights for the Kurds in Turkey and against the Turkish state since the mid-1980s. It is classified as a “terrorist organization” by Ankara and its allies.