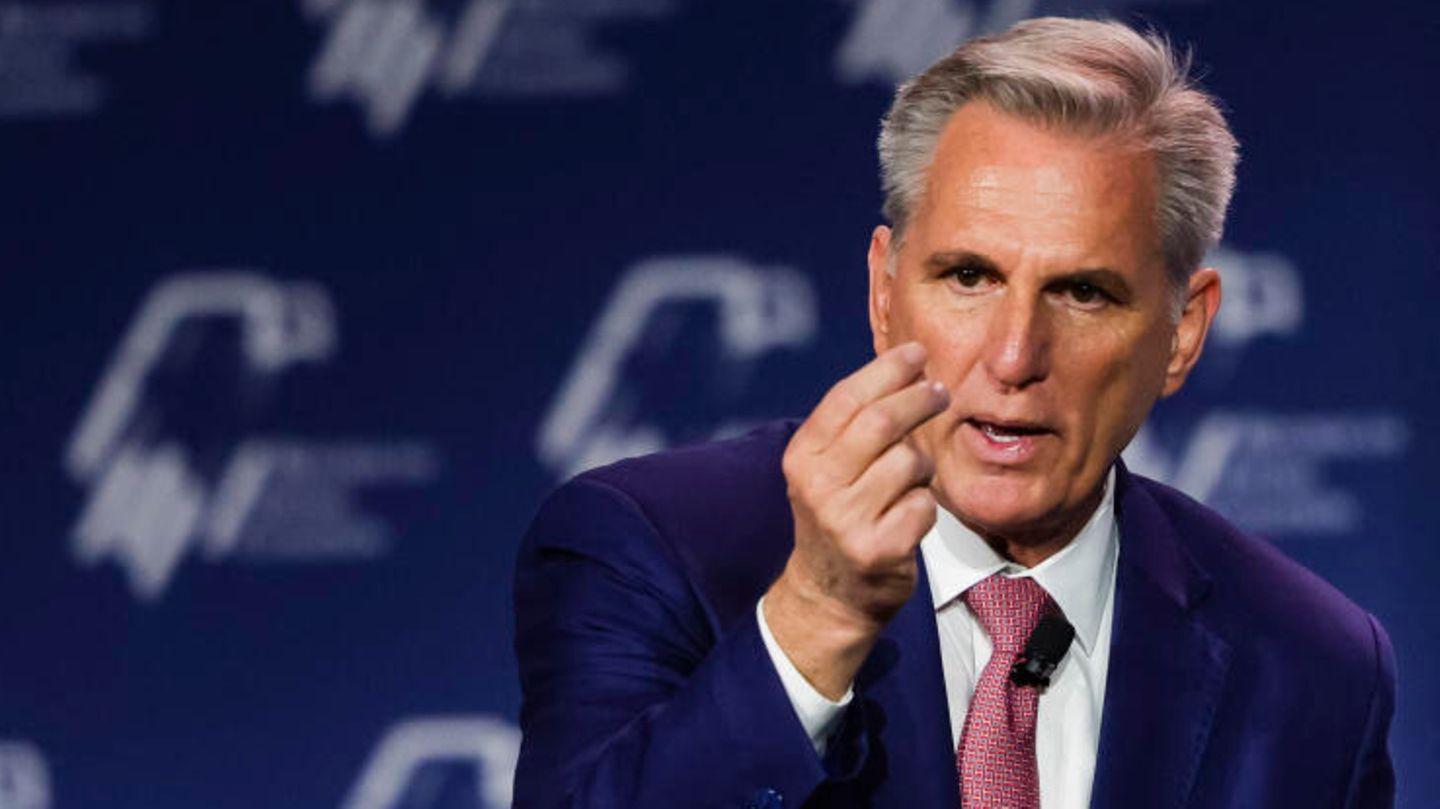 The first session of the new US Congress should be an hour of satisfaction for Republicans. But instead of celebrating their newly won majority, an internal power struggle overshadows the start for the Conservatives – especially for one.

Kevin McCarthy is in a bind. In the new US Congress, which meets for the first time on Tuesday, the Republican faction leader wants to secure the presidency of the House of Representatives. After the Conservatives were able to win a narrow majority in the Congress Chamber, the symbolic gavel of the “Speaker of the House” is actually within reach for the 57-year-old. Actually – if it weren’t for a long shadow named Donald Trump.

The ex-president’s influence continues to cut across the entire “Grand Old Party” – as well as through the Republican faction in the House of Representatives – and divides it into moderate conservatives and loyal Trump hardliners. A group of the latter have already publicly declared that they will vote against McCarthy, and others may quietly follow.

With just hours before the upcoming election, the Republican faction leader faces a dilemma: make further concessions to the far right that make him look weak before he takes office – or risk a handful of dissenters jeopardizing his leap to the most powerful post in parliament.

Kevin McCarthy faces a headwind from the right

For McCarthy, it is nothing short of the most significant fight of his political career. After all, it is about the third most important post in the United States – after that of the President and Vice President. After the midterm elections, the Republicans control 222 of the 434 seats in the House of Representatives. McCarthy needs at least 218 to be elected. Since the Democrats will vote against him as a body, he can hardly afford dissenters from his own ranks.

The faction leader has therefore tried to appease his critics in recent weeks with all sorts of concessions – from tightened financing rules intended to make it difficult for the Democrats to govern, to investigations into the FBI, an urgent concern of Trump supporters in the party.

A . To please the hardliners, McCarthy signaled support for a rule that would allow the Speaker of the House to be sawed off at any time with a quick vote. He had resisted this for a long time, lest it soon mean his own premature end of office.

But his accommodation was obviously not enough.

“The times call for a radical departure from the status quo – not a continuation of past and ongoing Republican failures,” a group of nine ultraconservatives positioned themselves on Sunday with a . The critics were bolstered by an announcement by the leading conservative Club for Growth that it would punish Republicans who campaigned for the faction leader.

Farewell to Nancy Pelosi: The woman with the gavel who read Trump the riot act

New US Congress could start with election crime

When the 118th US Congress meets for the first time in a new constellation on Tuesday afternoon (6 p.m. German time), McCarthy will see the moment of truth. to fight to the bitter end for the speaker’s post, even if that means MEPs having to vote more than once – an option that is now becoming increasingly likely.

If McCarthy fails to secure a majority Tuesday, more ballots would follow until someone — he or another candidate — finds enough support to prevail.

The case would be a bitter blow to McCarthy and . It’s been exactly one hundred years since a spokesman candidate did not directly achieve the necessary majority: in 1923, nine ballots were needed to determine a chairman. Until the presidency is clarified, nothing works: the Congress Chamber can neither start its work nor can the new MPs be sworn in.

McCarthy’s supporters, however, are optimistic that they can secure a majority in the last few meters. “I think we can do it,” Ohio Republican Rep. Jim Jordan told reporters Monday night. A possible chaos in the case of multiple ballots, he brushed aside with the statement “I think America will survive”. Added to this is the advantage of the lack of competition. So far, no other Republican has been able to gather more votes behind him.

However, one thing is certain: Even if McCarthy is ultimately allowed to successfully swing the spokesman’s hammer, the intra-party power struggle will not be over anytime soon. On the contrary, with all the concessions that the faction leader had to make in the run-up to his vote, it shouldn’t get any easier to keep the right wing of Trump under control in the future.