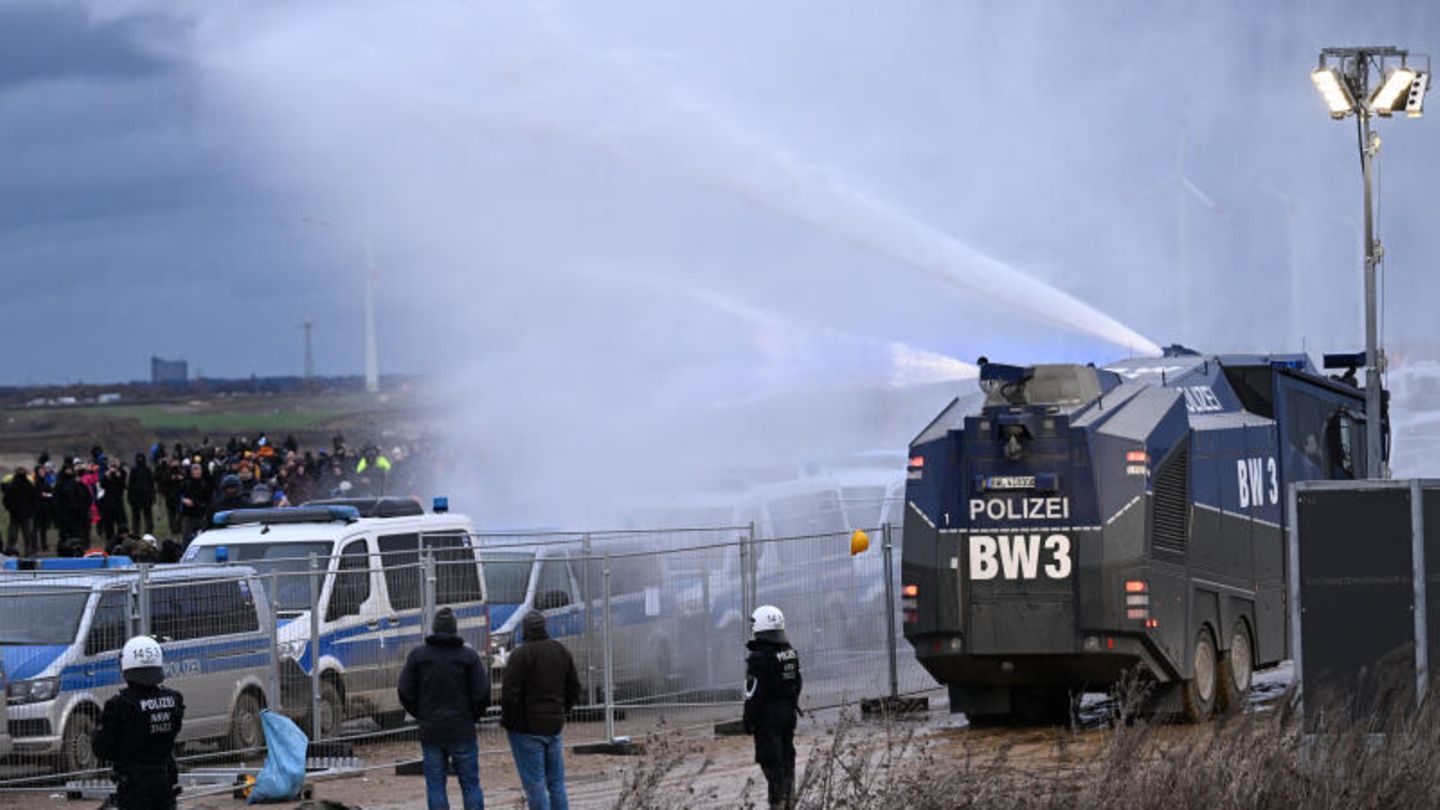 Hundreds of demonstrators and police officers clashed violently on the sidelines of a large anti-coal demonstration at the Rhenish opencast mine near Lützerath. The forces used batons and water cannons against the demonstrators.

In front of the village of Lützerath in the Rhenish lignite mining area, there were clashes between climate demonstrators and the police on Saturday. The police used water cannons and batons. A police spokesman said “immediate coercion” would have to be used to prevent the demonstrators from advancing to Lützerath. At nightfall, the situation calmed down, as reported by a dpa reporter. There were injuries on both sides, a police spokesman told the German Press Agency on Saturday evening. The exact number of injured people and the circumstances that led to the injuries were not initially known.

The small Lützerath, a district of Erkelenz west of Cologne, has been cordoned off by the police for days and surrounded by a double fence. The few buildings in the settlement are currently being demolished to enable the energy company RWE to excavate the coal underneath. On the other hand, many thousands of people protested in the neighboring district of Keyenberg on Saturday, despite the constant rain and strong gusts of wind. The police spoke of 10,000 participants, the organizers estimated the number at 35,000.

Dispute in the coalfield

Protest in the mud: Thousands demonstrate in the pouring rain in Lützerath – the pictures

Some of the demonstrators tried to get to Lützerath or to get through to the opencast mining area. The police forcibly pushed them back. The police warned that it was life-threatening to walk to the edge of the mine because the ground had softened due to the rain and there was a risk of landslides. “I am absolutely appalled at how normal meeting participants are carried away into entering the absolute danger area here,” said Aachen police chief Dirk Weinspach of the German Press Agency.

When the police launched water cannons in the afternoon and the wind spread the jet in all directions, the demonstrators cheered, reported star-Reporters Gregor Scheu and Dayan Djajadisastra from on site. The group of activists was very diverse – from black-clad hoods detonating pyrotechnics to peaceful protesters performing expressive dances in front of police officers in full riot gear. Very few were alarmed — not even by the loud barking of the police dogs.

According to the police, individual demonstrators also attacked police patrol cars and threw pyrotechnics in the direction of the officers. A spokesman said tires were punctured and wing mirrors kicked off. The emergency services initially gave no information on arrests and injuries. After the police asked them to leave the immediate area near Lützerath, many demonstrators finally made their way back. The others were pushed back by a broad police chain on the field, as reported by a dpa reporter. There was shouting, but initially no clashes.

A spokesman on the rally stage had previously explicitly called on the demo participants to ignore police instructions. He thinks it’s legitimate if the participants try to get into the cordoned off Lützerath, he said: “Don’t let the police stop you. We are powerful. We are on the side of justice. We won’t let this repressive system stop us. We’re stopping this mine. Do whatever you think is right.”

The main speaker at the rally was Swedish climate activist Greta Thunberg. “Lützerath is still there, and as long as the coal is still in the ground, this fight is not over,” said the 20-year-old to the cheers of the audience. It is incomprehensible to her that coal will still be mined and burned in 2023, although it is well known that the climate change caused by this is costing human lives in many parts of the world. “Germany, as one of the world’s biggest polluters, has an enormous responsibility,” Thunberg warned.

In an interview with the German Press Agency, the world-famous activist criticized the Greens for their support for the demolition of Lützerath. Corporations like RWE should actually be held accountable for how they treat people. “The fact that the Greens make compromises with such companies shows where their priorities lie,” said Thunberg.

In the meantime, the evacuation continued in Lützerath itself. Emergency services climbed trees on which activists persevered. According to the energy company RWE, preparations were also underway to get two activists out of a tunnel. “The forces are very careful, no heavy equipment can be used here because that would endanger people in the underground soil structures,” said police chief Weinspach. The situation at the tunnel was unchanged, said an RWE spokesman in the early evening. The demolition of the already cleared buildings also continued on Saturday. Among them was the former home of farmer Eckardt Heukamp. He had been the last farmer in Lützerath.

Thunberg had already visited Lützerath on Friday and denounced “police violence”. Chief of Police Weinspach had vehemently rejected this accusation. When asked if she maintained her criticism of the police, Thunberg told dpa: “Police violence means different things in different countries. But there have been several cases in which the police have endangered the lives of activists.”

The Green Youth also criticized the actions of the police. “The reports we are getting from the village cannot be justified,” said Nicola Dichant, spokeswoman for the Green Youth in North Rhine-Westphalia. “Images of police operations that endanger activists massively, paramedics who are thrown out of the village by the police, and the press that is not allowed to observe. This is the opposite of a de-escalative operation.”