Tank debate: This is how the press criticizes Scholz’s hesitation with Leopards 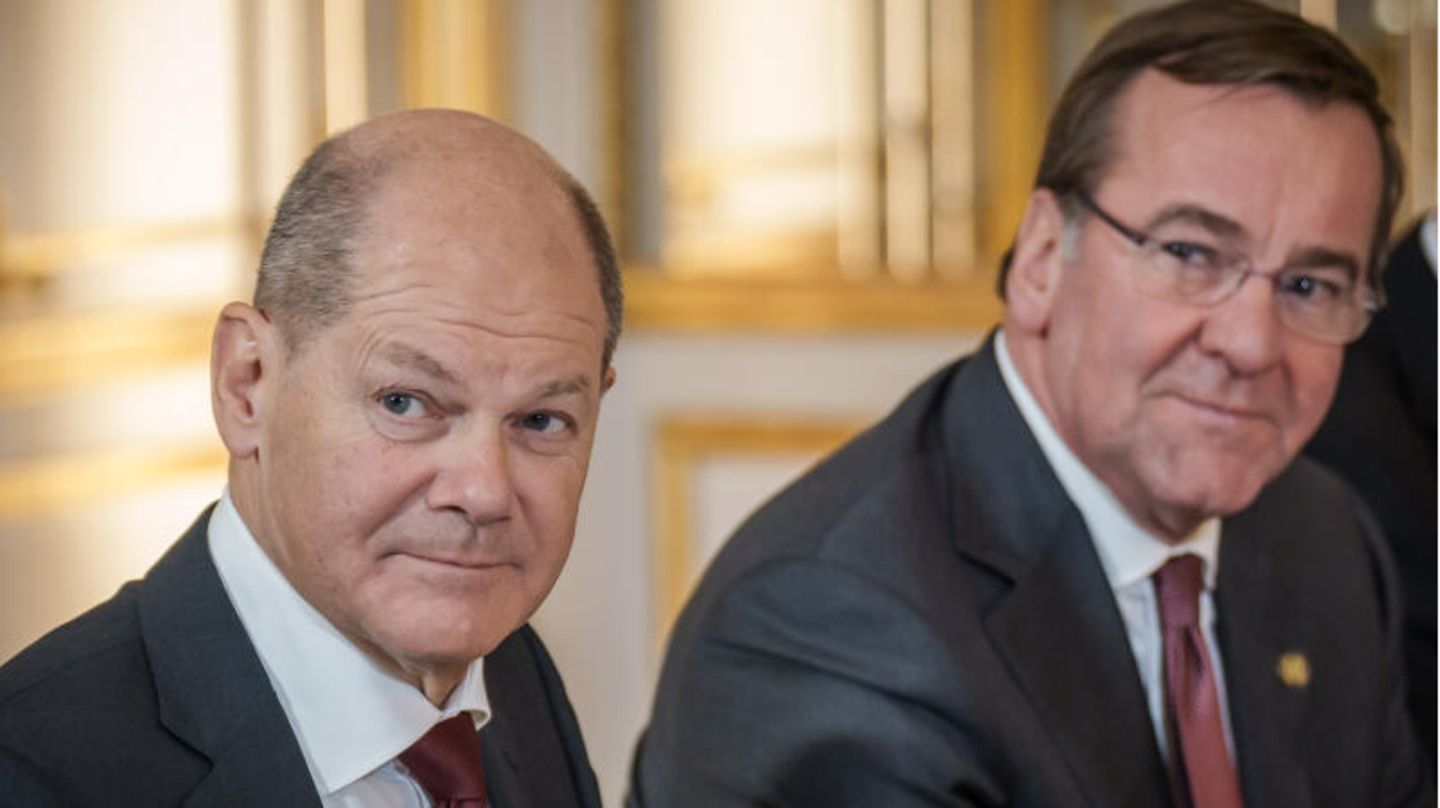 The dispute over tank deliveries continues to escalate: the alliance partners are angry with Germany, the Ampel coalition members insult each other. And the chancellor? silent. It didn’t go down well in the press either.

In the tank debate, criticism of Germany’s silence is growing. So far, the federal government has neither made a decision on the delivery of German battle tanks to Ukraine, nor has it given clear delivery permits to other countries. “We are only acting in close coordination,” said Chancellor Olaf Scholz when asked by a journalist on Sunday when he would allow other countries to deliver their German Leopard 2 tanks to Ukraine.

Foreign Minister Annalena Baerbock went one step further and declared that there would be no opposition to the supply of tanks from third countries. Poland’s Prime Minister Mateusz Morawiecki had previously announced that he would, if necessary, deliver leopards to Ukraine without Germany’s consent. And the tank issue is also causing trouble within the traffic light coalition. The FDP and the Greens are pushing for a quick delivery, while the comrades are defending the chancellor’s wait-and-see attitude.

In any case, the silence from Berlin is not particularly well received in the German and international media. The press review at a glance.

“Hannoversche Allgemeine Zeitung”: What remains of the current debate is the renewed impression that the chancellor would rather be driven than be a driver himself. Germany, a state with a claim to leadership in Europe, should actually lead the way and not wait for the Americans and their possible delivery of battle tanks. It would therefore be a good thing if Scholz and his new Defense Minister Boris Pistorius clarified this as soon as possible. This includes ending the confusion surrounding Leopard main battle tank inventories. The claim that almost a year after the outbreak of war there is still no list of available equipment is as incomprehensible as it is unbelievable. It sounds like a game of hide and seek. No, Olaf Scholz does not prevent Germans from going it alone. It prevents joint European action. In doing so, he isolates Germany.

“Lausitzer Rundschau” (Cottbus): “Germany is not supplying fewer arms to Ukraine than comparable countries. However, due to the chancellor’s erratic communications, which are causing confusion not only in the western alliance but also in its own coalition, the Federal Republic is appearing increasingly isolated. The debate over the supply of Leopard main battle tanks thus reveals a deeper deficit: There is no geostrategic school of thought in Germany and, accordingly, still no convincing answer to the challenge that Putin’s imperial war of aggression and his attempt to reorganize Europe poses for his own interests You don’t do justice to being a leading power with such gaps.”

“Rhein-Zeitung” (Koblenz): Of course, Germany and its allies, above all the United States, must help Ukraine to the best of their ability against the aggressor Putin. But it is also true that every new delivery of arms to Ukraine increases the risk of a direct confrontation between the blocs. The West must be prepared to take this risk. After all, it’s about not rewarding Putin’s aggression. At the same time, NATO must not let itself be carried away, no matter how understandable the expectations of the Kiev leadership are. The debate about the leopards must therefore become more sober. What offensives are the Ukrainians capable of when they have the Leopard in large numbers? And how do the Russians escalate the war if the deliveries themselves put them on the defensive?

“Scholz may have respectable reasons. But why doesn’t he name them?”

“Central German Newspaper” (Hall): While the Liberals and the Greens are pushing for the supply of Leopard battle tanks, the Social Democrats are putting the brakes on. The fact that the FDP defense politician Marie-Agnes Strack-Zimmermann now describes the SPD parliamentary group leader Rolf Mützenich as a “symbol of all central misconduct in German foreign policy” is a new level of escalation. She is not the only one: Green parliamentarians also sharply criticize the chancellor and call for the delivery of battle tanks, for example in the European alliance. European countries are also getting impatient: Poland and the Baltic States. After all, they face a significantly different threat from Russia on NATO’s eastern flank. What remains of the current debate is the renewed impression that the chancellor would rather be driven than be a driver himself. It would therefore be good if Scholz and his new Defense Minister Boris Pistorius (SPD) quickly clarified the matter.

“New Osnabrück newspaper”: In the vast majority of comments and headlines, the matter has been decided: The fact that the new Defense Minister Boris Pistorius Kyiv did not “yet” promise any battle tank deliveries in Ramstein is sharply criticized and blamed on a hesitant and hesitant Chancellor Olaf Scholz. And the hundredth call by FDP woman Marie-Agnes Strack-Zimmermann to finally send Leo to the front turned into “growing pressure” from the entire traffic light government on the chancellor. Rarely has it been so easy to garner maximum attention and loud applause with the same message over and over again – and to poison a genuine discussion. Because a serious discussion about the pros and cons is hardly conducted.

“Südkurier” (Constance): You don’t have to agree with Agnes Strack-Zimmermann on everything. In one point, however, the defense expert of the FDP hits the sore spot of German Ukraine policy: the communication of the Federal Chancellor is a disaster. In Ramstein, the NATO allies were waiting for the federal government to finally pull together on the tank issue. Instead, only words of comfort come again. The new secretary of defense is fussing and the chancellor is silent again. This delaying tactic is becoming increasingly difficult to convey. Scholz may have respectable reasons for not delivering the Leopard 2. But why doesn’t he name her? Why doesn’t he explain clearly what’s holding him back? Above all: How does the Chancellor Kremlin boss want to force Putin to the negotiating table if battle tanks are out of the question? The people in Ukraine, who are struggling to survive, are waiting for an answer, as are their allies – and last but not least, the citizens of Germany.

“People’s Voice” (Magdeburg): deceive, trick, camouflage (TTT). The three basic rules of military business also apply to the new Secretary of Defense from day one. The focus is on the tussle over deliveries of Leopard 2 main battle tanks to Ukraine. President Zelenskyi and the NATO allies finally want to see action from Germany. Olaf Scholz, as Chancellor Boris Pistorius’ direct boss, sticks to his hesitant tactics. Pistorius’ first TTT maneuver was to announce actions and delay them at the same time. He promised to put together a list of main battle tanks to be delivered at high pressure – even though it already existed. For the talks planned today with the Bundeswehr and industry, Pistorius has to come up with a new trick to announce to everyone, including his boss and his voters, what they want to hear. And at the same time not to dupe anyone. TTT for advanced.

International press on the tank debate: “Germany’s resistance is seen as temporary”

“NZZ” (Switzerland): “Poland is now threatening to send 14 Leopard 2 tanks to Ukraine if necessary, even without the necessary German approval. It wants to build a coalition of like-minded countries that also have stocks. This would be an unprecedented step and would protect future German tanks Exports to these countries are made impossible.(…) However, it can be assumed that neither side has a real interest in letting the conflict escalate.Pistorius made it clear on Friday that Germany would have no objections if buyer countries of the Leopard 2 tanks were trained by Ukrainian soldiers on them. Poland has already announced this step. This is another sign that Germany’s resistance is considered temporary and that Berlin has probably also reconciled itself to the prospect of a delivery.”

“De Telegraaf” (Netherlands): “This war has now lasted eleven months, and military experts are expecting a new Russian offensive in the spring. In order to be able to withstand this renewed attack, Ukraine is dependent on the support of the West. (…) Our government has started providing two modern Patriot anti-aircraft systems have taken a big step in support of Ukraine. And with Germany unlikely to block deliveries of Polish Leopard tanks, Western support for Ukraine continues to grow. With the upcoming Russian spring offensive, that support cannot come early Enough coming because Putin must not win this war.”

“The Sunday Times” (UK): “Chancellor Olaf Scholz has said Germany will only act in concert with America. President Joe Biden’s administration has approved an additional $2.5 billion in military aid to Ukraine, but he insists that Abrams tanks cannot be used due to the terrain and Problems refueling are not suitable for Ukraine.(…) Britain rightly remains in the lead when it comes to weathering headwinds and Russian threats. We must keep up the pressure on Germany and America to make them do it Doing the right thing and sending Ukraine the equipment it needs There is no happy ending to this conflict, but the worst thing would be if a wounded but defiant Putin took Ukraine and took the next step in his insane plan to redraw the map of Europe .”

Sweden: wave of violence is sweeping the country – the police are overwhelmed