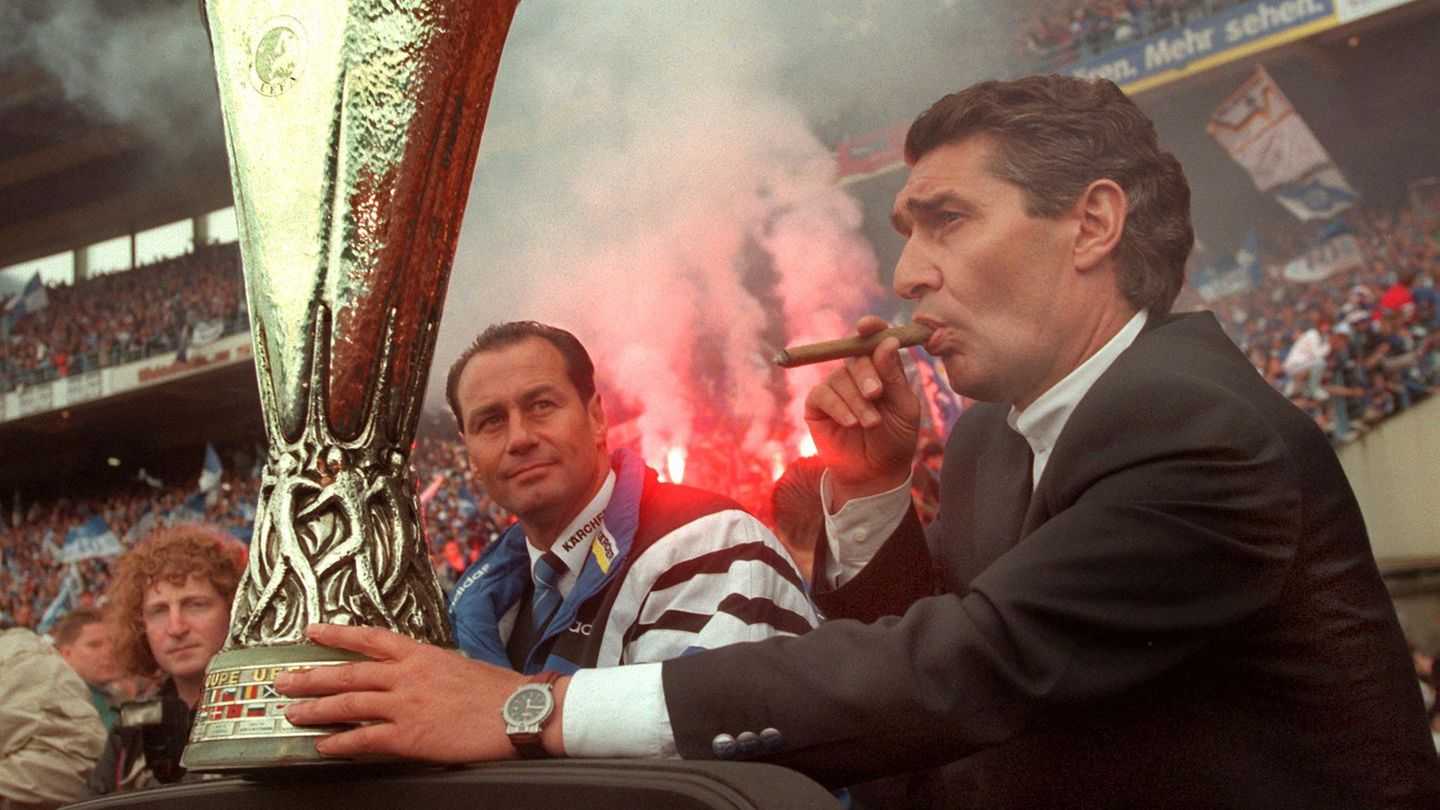 May 1997 is one of the most successful in the history of German club football. Schalke 04 wins the Uefa Cup, Borussia Dortmund follows suit with success in the Champions League. For a short time, the pot rules the football world.

First the “Miracle of Milan”, then the “Coup of Munich” – May 1997 went down in the history of German football. With final victories in the Uefa Cup and in the Champions League within a week, FC Schalke 04 and Borussia Dortmund attracted international attention and helped the region, which had been hit by structural change, to gain more self-esteem. At least for a short time, the competition between the two arch-rivals gave way to a proud sense of unity. Fired up by the miners’ struggle for their jobs at the time, “Ruhrpott” calls echoed through the stadiums in the west.

Looking back puts everyone involved in high spirits, even 25 years later. “Whenever I see this scene, a pleasant shiver comes down my spine,” said Lars Ricken of the German Press Agency, referring to his lift, which BVB fans have now voted the goal of the century, for Dortmund’s 3-1 on May 28th 1997 in the premier class final in Munich over the big favorites Juventus Turin.

FC Schalke provided an even bigger surprise seven days earlier. A football fairy tale came true not only for the fans, but also for the then coach Huub Stevens: “It was a sensation. Especially in the final we were the absolute outsiders against Inter Milan, this squad with nothing but top stars was actually a number too big for us.”

The round anniversaries after the happy ending in the penalty drama are now public holidays at Schalke. The fact that the current team made the return to the Bundesliga with a 3-2 win over St. Pauli just two weeks ago in Gelsenkirchen on the occasion of the 25th anniversary of the team from back then gave the party a huge boost. To Stevens’ delight, many alumni showed similar stamina as in the magical night in Milan: “It was a super nice day and the frame with the rise could not have been better. But I also had to think of Rudi Assauer, who did so much for Schalke did and unfortunately is no longer with us.”

Schalke’s triumph through the competition, fueled by irrepressible commitment, earned them the name “Eurofighter”. Even the then highly regarded Milan failed in the Giuseppe Meazza Stadium due to the royal blue team spirit and lost 4-1 on penalties in the second leg of the final. Above all, Olaf Thon remembers the subsequent ecstasy of the fans. “Seeing so many men crying was really breathtaking,” said the then captain to “Kicker” (Monday).

Similar to the Uefa Cup final, the Champions League showdown between Borussia Dortmund and Juventus Turin amazed the experts. When the Italians in Munich’s Olympic Stadium pushed for an equalizer after early goals from BVB attacker Karl-Heinz Riedle and Alessandro Del Piero’s goal, Ricken, who had only just come on as a substitute, made the preliminary decision with a lob.

Since then, the current director of the BVB youth academy has enjoyed cult status among Dortmund fans. The glorification of his hit continues unabated. “It’s funny, one meter is added almost every year,” commented Ricken with a smile. “A lot of people tell me how you threw the ball in from just behind the halfway line was great. It was only 25 yards.”