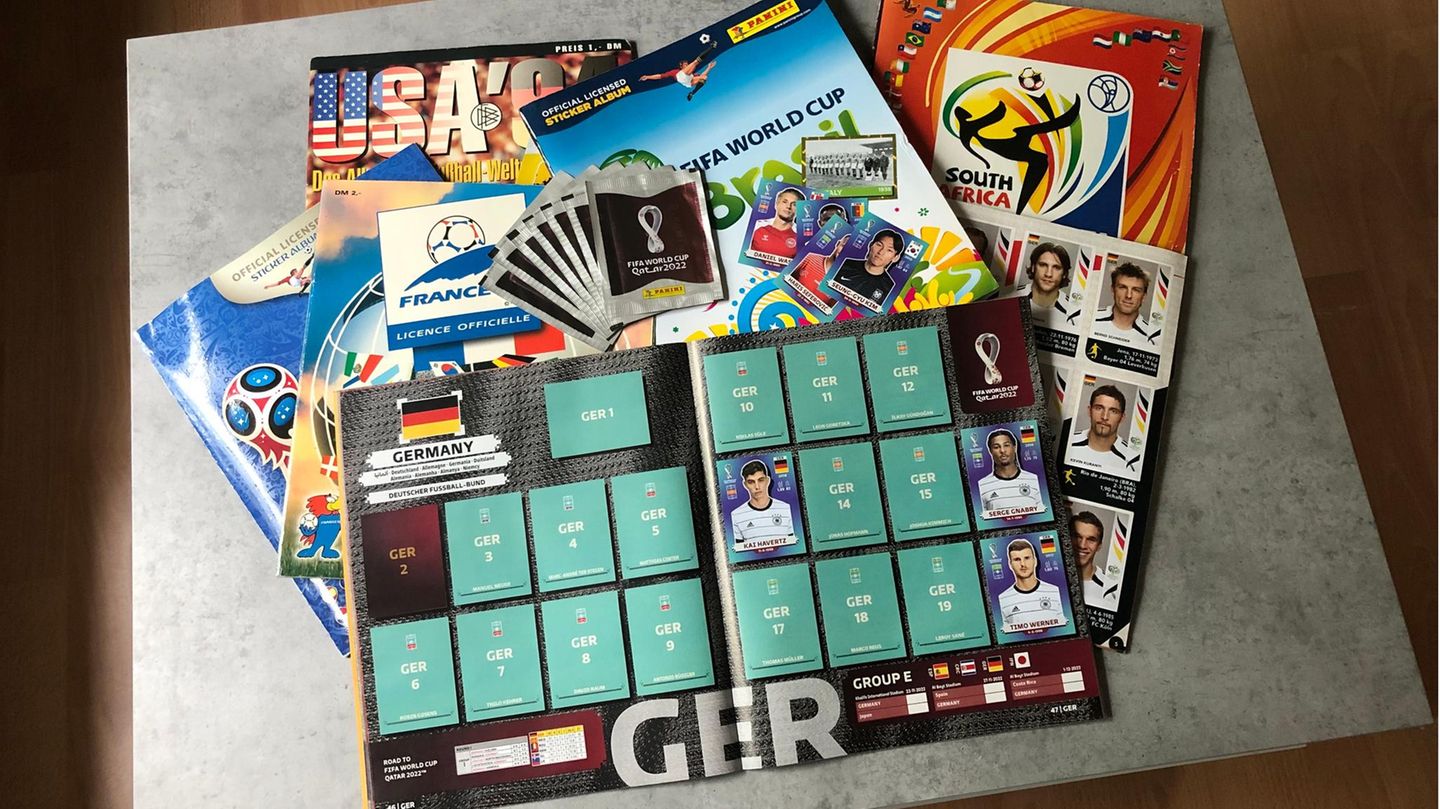 Collect, stick, swap: the Panini sticker album for the 2022 World Cup is here! The hunt for the coveted glitzis and extra stickers is on. The most important tips & information for collectors and why it will be the last Panini album.

When I look at Panini stickers, I inevitably have to think back to the early 1990s. At that time, the German national football team got the third star thanks to the cleverly converted Brehme penalty in the World Cup final in Rome. I was eleven years old and the finals in Italy were the first World Cup tournament that I consciously witnessed and celebrated. A summer later I spent a lot of pocket money on my first Panini scrapbook. It was a historic one, namely the first after reunification. Legendary stickers of the stars from 30 years ago stick inside. Anthony Yeboah, Matthias Sammer, the current national coach Hansi Flick (then in the service of 1. FC Köln), to name just three. Some a little crooked. I pay close attention to that today. And it’s far from all of them. That also rarely happens. Oh yes, “Panini Soccer 91” is written on the cover. A year later, the young Lothar Matthäus graced the cover of the Panini Bundesliga album in the red and blue FC Bayern jersey. The final round in the USA in 1994, which was not very glorious for Loddar and his athletic team, was my first World Cup sticker album.

Since then I haven’t missed a major tournament: France, Japan and South Korea, the summer fairy tale of 2006, South Africa and of course winning the fourth star in the summer of 2014. Unforgotten because unique: the hasty reprint of the Jens Lehmann picture before the World Cup in Germany. Covered in ice cold by many: Oliver Kahn, who was fired by Jürgen Klinsmann. A few hundred euros have flowed into the portraits, team stickers and extremely popular glitzis over the years. I haggled for individual pictures on file-sharing platforms with elementary school students and teenagers, and got hold of the last missing ones on a large classifieds portal. The feeling of sticking the very last of more than 600 stickers is great. Even today.

Golden Glitzis: The album for the 2022 World Cup

I’m not really in the mood for the upcoming World Cup. Instead of a boisterous public viewing or a World Cup party in the garden with bratwurst and a keg of beer, it probably comes down to mulled wine, speculoos and Christmas stollen on the sofa at home. But despite the crazy circumstances of the Winter World Cup in Qatar, I’m not letting the anticipation take away from me. Especially not the ones on the Panini sticker album for the FIFA World Cup 2022. An incredible 670 stickers fit into the 80-page official album. Somewhat surprising: that’s twelve fewer pictures than four years ago. The envelope comes in elegant burgundy and is slightly roughened. It’s never been like this before. And while we’re at it: For the first time, the stickers aren’t numbered from 1 to 670. Each of the 32 teams consists of 20 portraits, a team photo and the association logo as a glittery sticker. Of course in gold (instead of silver). matter of taste. In any case, it fits the glamorous overall package of the mega event.

The stickers on the first and last pages are likely to be particularly sought-after exchange items this time as well. These include the World Cup trophy, La’eeb, the World Cup mascot, the logo of the world association FIFA, the eight stadiums and the official World Cup ball “Al Rihla”. Similar to the album for the 2018 World Cup in Russia, the last few pages contain the history of the World Cup in fast forward. In addition stickers of selected world champion teams framed in gold. The DFB team from the 1990 World Cup final in Rome will also be there. And: Also for the first time, Panini is hiding extra stickers in the bags that don’t even fit into the album. Supposedly there’s only one in every 100th bag on average. The first of these are currently appearing on online classifieds portals.

What Panini collectors ask themselves every year: How many packs do you have to buy at least to be able to stick all 670 stickers into the album? A mathematics professor at Cardiff University in Wales has taken on this question. Excluding swapping and extra orders for individual pictures, Prof. Paul Harper came up with 967 sticker bags for the 2018 Panini album. On average, that would cost collectors more than 870 euros. Exciting: In an exchange group of ten people you can get away much cheaper. But even here you have to reckon with an investment of around 280 euros to fill the album completely. That should hardly deter real collectors this time either.

Incidentally, six years ago a bag of stickers was still available for a paltry 70 cents. Panini has now rounded up: Five stickers for the album for the 2022 World Cup cost a whole euro. That makes 20 cents per picture. A proud price. But one thing could fuel the passion for collecting this year: there will be no more stickers from Modena for the 2024 World Cup in Germany. As announced in April 2022, FIFA has sold the sales and marketing rights to the US trading card manufacturer Topps. So the next sticker album is “Made in USA”. And Panini collectors like me are left with sentimental leafing through old magazines.

Spill or smudge? These packs exist

Instead of buying individual bags (each 1 euro), many collectors rely on sticker boxes with 100 bags. That’s 500 stickers and it takes a few hours – I speak from experience – to tear open the bags and place the stickers in the right places. For everyone who wants to take things a little easier and prefer swapping, there is one , and with four, ten or 25 bags of five stickers each.