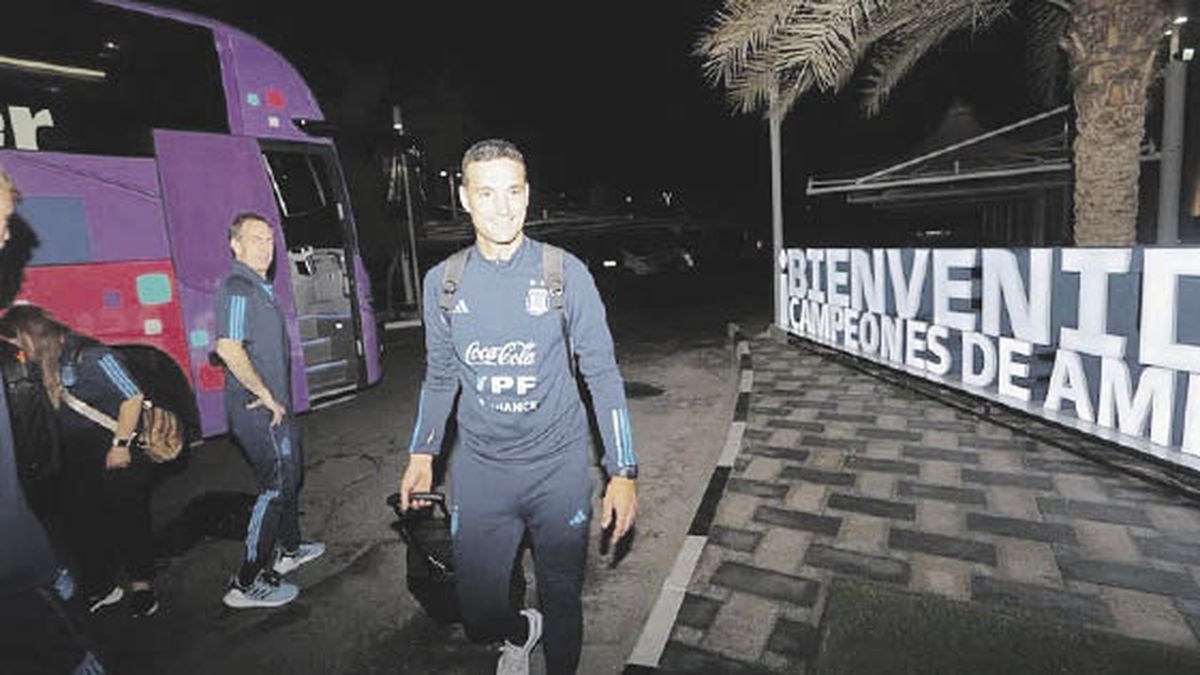 The first official activity will be next Monday the 14th with an open-door training session at the Al Nahyan stadium. On Wednesday, at 12:30, the American champion will play a friendly against the United Arab Emirates, directed by Rodolfo Arruabarrena, at the Mohammed Bin Zayed stadium.

Although the AFA tried to change the headquarters to be in Doha and thus avoid the trip, the negotiations did not come to fruition. The commercial agreement included the presence of Lionel Messi in Abu Dhabi and for this reason there was no chance of changing the country party.

Before the game, Scaloni said that he made a request to European clubs not to include players with physical discomfort in league games and release them for the World Cup, after a series of injuries that have affected members of different teams. .

“The reality is that we talk to the clubs so that the players who are not 100% don’t play their match with the club. We have been working to see if they can be released sooner, but it is difficult.”

In fact, in the last few hours, the Argentine coach of Sevilla, Jorge Sampaoli, released Alejandro “Papu” Gómez and Marcos Acuña, who join his teammate Gonzalo Montiel, sent off in the classic against Betis last weekend.

He also stated that he wants to have “everyone available” for the debut on Tuesday the 22nd against Saudi Arabia for group C of the Qatar World Cup, although he clarified that there may be “nuances” between those summoned and opened the door to striker Paulo Dybala, who would arrive to the limit after his injury.

“The most important game now is the debut, it is a game that is played from the emotional, we want everyone available, beyond that there may be a nuance. Seeing the difficulty of the debut and the group, we need everyone available”, commented the DT.

“I am of the idea that there will not be players who are 100% physical in all the national teams but, yes, our idea will be that they are at their best football level. It is true that we will do our best so that those who are not in full condition do not risk the last games, although we do want whoever is well to do so because it is the best, ”he said.

At the same time, the DT’s statements were a nod to the Cordovan Paulo Dybala, figure of Roma from Italy, who suffered a significant injury to the rectus femoris muscle of his left leg on October 13 and would add minutes against Torino in the next Sunday’s date.

“We are clear that in the last game some will not play but they are physically well and there will be others who will have to show it. We have technological tools to measure how they are physically. We need players who are ready for their debut, so we will initially call up those who are well”, Scaloni focused.

“I am concerned about injuries on a personal level because they gave us a lot throughout the process and due to physical or technical decisions they are left out of the World Cup. This process is hard, we must think about the best for the whole group and they will be difficult decisions to assimilate, ”lamented the DT.

Scaloni, was scheduled to release the list this Saturday, but will finally do so on Monday.

“As we are having some problems with the players, I will do it a few days later because we want to be completely sure that we can count on them and that they will be in a position to play,” he said, referring to Dybala and the Juventus players (Ángel Di María and Leandro Paredes), who are also recovering from their respective injuries.

On the other hand, Scaloni clarified that they will do everything possible so that it is not Lionel Messi’s last World Cup, despite his 35 years, because he is “happy on a pitch.”

“If we take care of him and if we carry him as we have to, there could possibly be more games for Leo, because the world of football asks for it and that is evident. So it is up to us to take care of it, ”he stressed.

With his sights set on the debut on Tuesday the 22nd, at 7 in Argentina, against Saudi Arabia, he assured: “It is an emotional match, a different match for the one who played World Cups because the first match of a World Cup is the anteroom. A positive result generates a different attitude. We will work a lot on the emotional, on not thinking so much about the rival but thinking about ourselves. Knowing what we have to do.”

Argentina will also integrate the zone with Poland, which has the Barcelona striker Robert Lewandoski, and Mexico, led by the Argentine Gerardo Martino.

“The most important thing is that they enjoy playing with this shirt, we made a lot of emphasis that the previous group was a success. Nothing happens tomorrow if you lose, life goes on. You cannot go out on the court thinking that if you lose, everything is wrong, ”he closed.

Scaloni has everything on track to continue in office after the World Cup but has not yet signed his renewal, pending the result in the maximum appointment.