With a great level, Argentina thrashed the United Arab Emirates in the final test 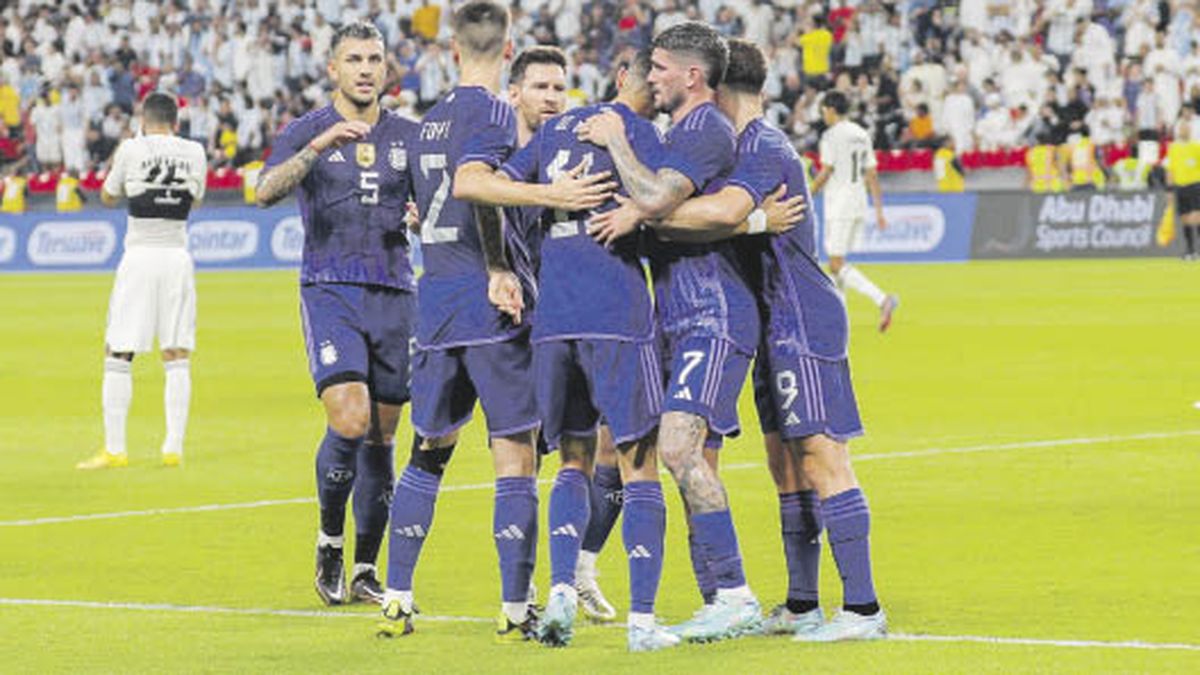 Argentina complied against a weak team led by the Argentine Rodolfo Arruabarrena and passed the last test, less than a week after the debut, without injuries and without demanding players who were not 100%.

In addition, the victory served to prolong the undefeated status of the “Scaloneta” that has already played 36 games and was one away from the historic Italian brand.

Scaloni had warned that he did not want to take any risk a few days after the World Cup premiere against Saudi Arabia but this friendly, at times with a climate of practice with the public, helped him to draw some conclusions.

Di María had 45 minutes to show that he is key in this team, he scored two great goals and put a great pass to Messi that ended in the first Argentine goal scored by Julián Álvarez.

Messi, at half speed, once again confirmed his commitment by playing the entire game, assisted Julián Álvarez in the first goal and towards the end of the first half made it 4-0 with a great definition from the right to add one more cry with the national jersey.

The main novelties in the selected team occurred in the defense since Juan Foyth occupied the right side, Nicolás Otamendi became the first central marker and Lisandro Martínez, a guarantee as a variant, joined the team in the absence of Cristian “Cuti ” Romero, disaffected even from the substitute bench.

On the left side, Marcos Acuña also showed a good level after being in doubt due to a muscular problem and brilliantly assisted Di María in the second goal.

Alexis Mac Allister, finally, was chosen to fill the position of internal midfielder on the left that was occupied by Giovani Lo Celso, injured due to injury, and although he did not look out of place, he did not leave the feeling of taking over the position for the future. The midfield was completed by two historical players in the Scaloni era. Rodrigo De Paul, who always plays the game without slowing down and with an admirable prodigality, and Leandro Paredes, with a great presence in the central zone and showing an intelligent distribution of the game.

Up front, Julián Álvarez took advantage of the opportunity to replace the striker Lautaro Martínez and was in charge of opening the scoring after Messi’s assist.

Di María -by far the figure of the game- increased the advantage with two great goals, the first with a great first-class volley after Acuña’s cross and the second with a series of dribbles in the six-yard box.

To complete the show of the first stage, Messi’s goal appeared with a precise definition with a cross shot with his right leg.

For the second half, Scaloni’s coaching staff took the opportunity to test for the World Cup. From the outset he made four changes with the income of Gonzalo Montiel, Nahuel Molina, Germán Pezzella and Joaquín Correa.

With these variants, the team began to defend with a line of five with Montiel and Molina as wingers on the right and left, respectively.

At 5 minutes, Enzo Fernández came on for Julián Álvarez and the midfield was left with the former River, Paredes and De Paul. Messi remained loose and “Tucu” Correa was left as the only striker.

After a little scare with a shot to the crossbar and a save by “Dibu” Martínez, Argentina found the fifth goal with the admitted Correa who, with some luck, defined after a great pass from De Paul, the driving force of the National Team that He played with the seriousness of a World Cup match.

The new defense had some doubts and it was the weakest part of the second half, in which the United Arab Emirates grew a little more and even had the opportunity to discount, but first Martínez and then Pezzella on the line saved the unbeaten fence.

Argentina fulfilled its part and will transfer its enthusiasm to Doha, where as of today it will begin to work for the debut on Tuesday the 22nd against Saudi Arabia at the Lusail stadium, the same scenario in which it dreams of being in the final on the 18th of December at 12 noon in our country.