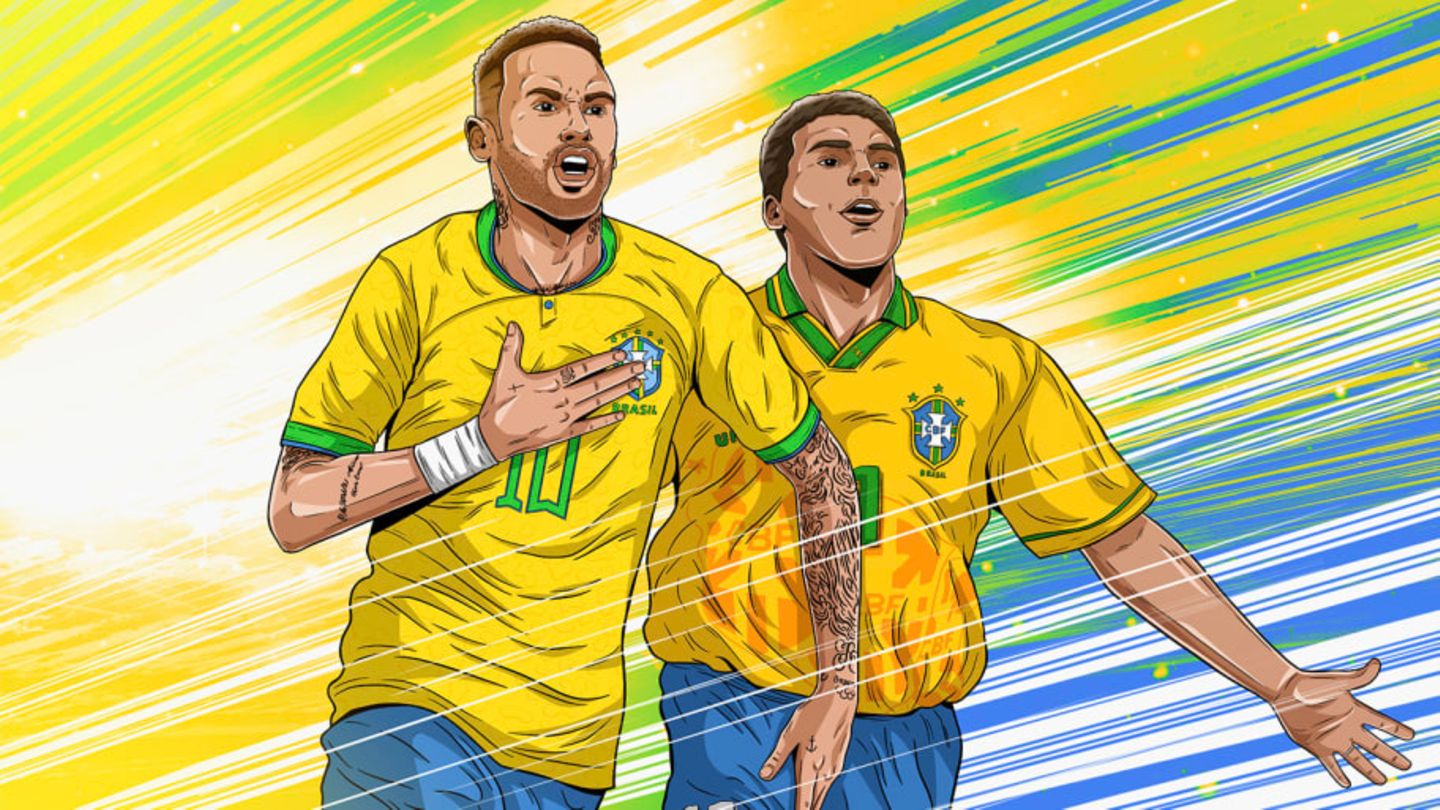 Ahead of the World Cup, Romário wrote this for Neymar: “No matter who you are, it is impossible to conquer anything alone.”

This piece has been translated from Portuguese.

The moment is coming, you know? The one that separates the boys from the men. And I know that, by now, you have probably heard a lot of bulls***, a lot of criticism, and a lot of pissing and moaning from people whose jobs are to give their opinion on someone else’s lives and careers.

So, the first thing I want to tell you is: I don’t intend to be a smart-ass and set the rules about what you should or shouldn’t do.

I, Romario, know perfectly well how you’re feeling. Oh, sure, now everyone loves to say that Shorty is like this, that he was like that, or that I’m the guy.

But the truth, mate, is that until 1993 there were a lot of people who spoke really, really bad about me. No kidding here. I mean it!

They would question my behavior off the pitch.

They would criticize my statements to the press.

And they would even say that I was undisciplined.

Man, to be honest, what did they want? A player who would ask their permission to be allowed to be who I am? please

If I were the kind of saint they idealized, I would never have gotten to where I did. The crack player, the genius in the box, the top scorer. the guy

Like you, I came from far, far away, and I struggled a lot before I could become a football player and achieve everything I’ve achieved.

Back in Vila da Penha, if things had been different from what I wanted, based on agility and courage, it wouldn’t have happened.

So, my dude, the first thing I want to tell you is: Just be yourself. People will criticize you anyway … but the press, the fans and even the opponents only come to admire us when they feel there is truth in our attitudes.

And you know perfectly well where a player achieves that, right?

Just like you, my friend, I also played in Europe. And from that time came a feeling that opponents and fans had in common about me.

In my time, Neymar (and it wasn’t so long ago), players like me were called BAD BOYS.

But that doesn’t mean we were evil or did wrong.

To tell the truth, if my attitude harmed anybody, it was me….

Just imagine if I was a footballer keen on taking care of my body like you know who does nowadays? I guess — and it’s just a guess — I would have brought home at least one more World Cup.

So that’s what I’m talking about, bro.

Really, do your part on the pitch and try and forget the rest, all the noise that comes from the outside. I always say that a good image is nice for a TV set. Just remain unfazed by what others will say about you.

Brazilian fans often don’t know how difficult it is to compete at a high level in the World Cup, a tournament where mistakes are not allowed.

And everyone knows that you want to do great things and are decisive on the pitch. You are unique there, “in that last third of the pitch,” as we usually hear from commentators who have never set foot on a pitch with the fans booing you from the stands.

But here’s a point I’d like to reinforce: No matter who you are, it is impossible to conquer anything alone.

I know you know this.

Now I’ll tell you how I found that out.

When the Brazilian team traveled to the US in 1994, I said that we would win the World Cup and that I would stand out.

Unlike the Brazilian fans, journalists who didn’t believe in us had to accept it. Then, suddenly, the story that “Romário won the ’94 World Cup alone” stayed forever.

This is bullshit man!

That’s not how it happened.

We wouldn’t have won without the firmness of Taffarel, who was under severe criticism from the fans even before the World Cup began, but whose steady play was essential to our success — especially in the penalty shootout against Italy in the final.

We wouldn’t have won the Cup if we hadn’t had the consistency of that pair of defenders, Aldair and Marcio Santos, and if we hadn’t been able to count on the strength of Dunga and Mazinho. And I have to talk about our wingers, who were in a state of grace, with Jorginho giving me a gift in the match against Sweden in the semifinals. That match was hard, with their goalkeeper saving everything, stalling for time, and refusing the ball to enter their goal. Then Jorginho found me among the defenders.

And do I really need to tell you about Leonardo, who you already know personally? Or about Branco, who came off the bench, drew a foul and scored a great goal in that match against the Netherlands?

Above all, Neymar, in that team, we had a lot of character and a lot of camaraderie.

Raí was the captain, the unanimous owner of shirt number 10, but he gave way to Mazinho because Parreira needed to rebuild the midfield. And Zinho, who had played a lot in Flamengo and Palmeiras as a leftwinger, reinvented himself for the benefit of the group. Everyone wanted to be on the pitch, mate, it was a World Cup. But people also understood the greater good at stake. They made sacrifices.

And as almost no one remembers it anymore, I will tell you about a special match for me. It was the Fourth of July, the US’s Independence Day, and we were facing the Americans on their home turf. The match was tough. To make matters worse, Leonardo was sent off. Things don’t always go the way we want.

Can you imagine the pressure?

To be eliminated in the round of 16 against the US?

I could feel the heat of the criticism, which would be waiting for us in the case of our defeat:

“Brazil is no longer the country of football.”

“Twenty-four years without winning? How shameful!!”

“The Brazilian team no longer has the best players.”

“Argentina wants to be the champions.”

So, in one move, I went back to the midfield, asked for the ball and carried it to the front.

US players surrounded me, including Lalas, a giant defender who scared everyone (except me).

I could have shot to the goal, as the angle allowed it.

But I made another decision. Bebeto was in a better position, and I passed the ball to him — and even now, people still say I’m greedy. Can you believe it?!

He shot it smoothly in the right corner, avoiding Tony Meola. And you may not know it, Neymar, because you were very young, but the Brazilian fans remember what Bebeto said to me at the celebration.

The whole of Brazil did lip-reading:

After that, it was done. There was no way to take the trophy from us. I am telling you this story because, as you may already know, no one wins alone — especially in a World Cup.

But, being who we are, we can never escape the responsibility of putting things in their proper place. To beat the chest and ask for the ball when the team needs it most.

Neymar, I didn’t have the opportunity to play many World Cups.

God only knows how much I would have enjoyed playing in 1998 and 2002. Unfortunately, I couldn’t.

And in the only cup I played as a starter, I had to give myself to the maximum, along with my teammates, so that we could win.

Everyone only remembers the joys, the celebrations, and the victory themes.

But almost no one remembers the pressure of playing in a World Cup wearing the Brazil shirt after so many years without a title.

The comparisons, the belittling, and the empty criticism can all hurt a player as enlightened as you.

But you have the joy of those who play with pleasure. And the main thing is that you bring people joy when you play. You are f***ing great, bro!

May I tell you something? If I could go back in time, I would do everything the same way to secure that ’94 title. I made my story, and I’m sure you will make yours. We don’t owe anything to anyone, and the Brazilian fans are always with us when they realize our commitment, dedication and lust for victory. I enjoy playing like this. And I’m sure you do, too.

So when I think about it, I remember that you will be on the pitch, and my heart is at peace. Because I know you represent the spirit and the football that all of us Brazilians like to see. That you will beat your chest and ask for the ball when the team needs it most. That no one more than you deserve to bring this sixth World Cup home.

Now it’s your turn, man! I trust you. Or rather, Brazil trusts you.

May our Heavenly Father bless you in Qatar.