Qatar: Argentine fans took over with a flag within hours of the debut the various fans they called themselves via social networks for the Argentine flag, being the first where the participation was clearly Argentine, since previously there had been demonstrations of support but many were foreigners who showed their respect for the Lionel Scaloni’s team. 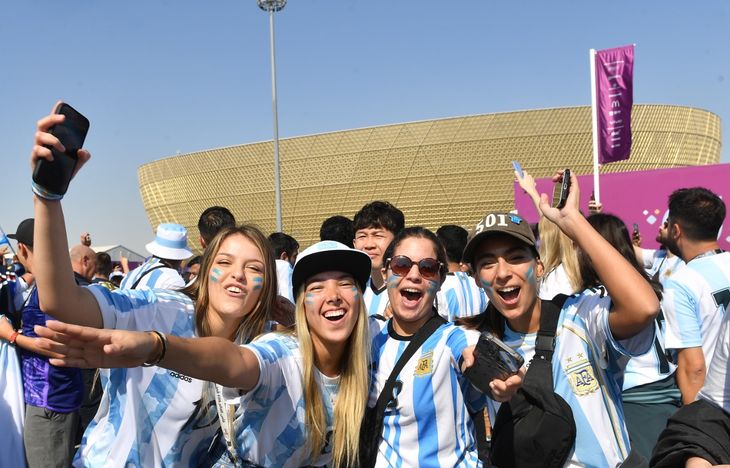 Expected a large number of Argentines for the first match against Saudi Arabia at the Lusail Stadiumsince the tickets for the meeting have been sold out since August, so there will be a light blue and white tide in the venue that has a capacity for 80 thousand people.

For their part, football lovers also showed their affection and passion in the streets of the Obelisk. In front of a monument projected with different phrases and clippings of iconic moments, people celebrated the start of the international sports event.

In detail, there will be until the end of the World Cup a specially designed mapping that will be screened from the night before each game in Argentina and monuments such as the PLanetarium, Usina del Arte, Lezama Palace, Monumental Tower, Plaza Congreso Monument, Women’s Bridge and Monument to the Spaniards They will show the Argentine colors.

For those who stayed in the Buenos aires city (CABA), you will be able to watch the matches on the big screen who put the Buenos Aires government on the Francis Seeber Square (av. Del Libertador and av. Sarmiento), the main stage that was arranged to live the most important football event.

On that screen (18 x 10.24 meters), which will be available until December 18, you can watch the matches, as well as movies related to soccer, according to reports.

“Starting today, BA Emoción Mundial will allow residents to follow the minute by minute that is lived in Qatar, with the projection of the 64 matches and multiple activities that are going to be generated in the neighborhoods of the City”, added in a statement in which it was specified that the main stage “will work from 9 to 19, although the hours will be extended according to the presentations of Argentina.”

For each day, starting at 6:00 p.m., a cycle of interviews with players who went through the national team.

On the other hand, in 30 squares thematic games will be offered and artists will make 3D urban art murals in different points related to the World Cup.