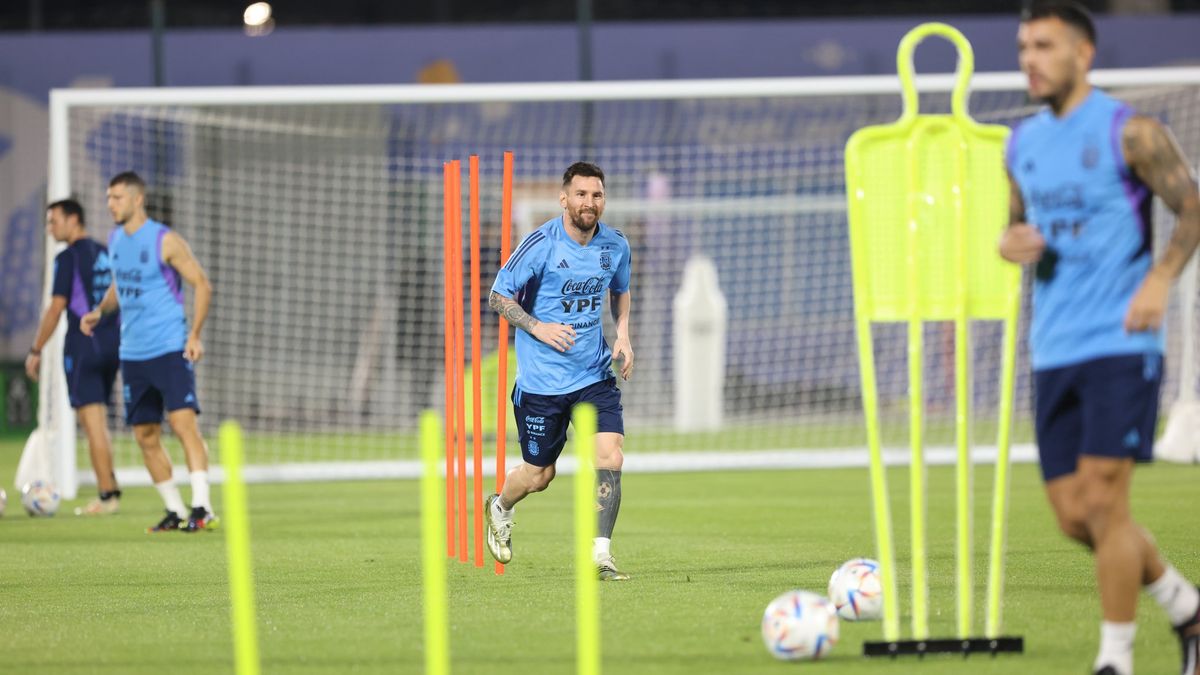 The squad trained, behind closed doors, at the University of Qatar with the presence of Messi and the other 25 members, including Cristian Romero who had ended with a blow to the ankle.

The part of the training that the AFA published emphasized that all the players were “on par” in a sort of denial of the rumors that Messi had trained differently.

From the concentration of the National Team they also attached photos and videos of Messi along with the rest of his teammates running with their boots on and another of “Cuti” Romero, who, like the rest of the headlines, had taken care of himself in the activity on Wednesday for a blow to the ankle.

“More together and united than ever, did you hear? Yes, #TodosJuntos”they harangued from the official social networks of the selected one.

Coach Lionel Scaloni, for his part, did not have tactical work to test the changes he is considering making ahead of Saturday’s decisive match against Mexico at Lusail Stadium. The Qatari afternoon activity was completed with definition exercises with the participation of the defenders and forwards.

The doubts remain the same as those that arose after the blow to the illusion and the end of the undefeated 36-game period after the unexpected defeat against Saudi Arabia 2-1. Most likely, one of the full-backs will lose ownership.

The coaching staff was not satisfied with the work of Nahuel Molina and at times they observed him overwhelmed by the context of debuting in a World Cup at the age of 24.

Instead of the Cordovan, Gonzalo Montiel could enter, who had recently lost one-on-one with the Atlético de Madrid player.

The last official match that the footballer from Seville played with the “Albiceleste” was the 1-1 draw against Ecuador, as a visitor, for the last date of the South American Qualifiers.

However, the former River Plate player has behind him the solid match he played in the 2021 Copa América final against Brazil at the Maracana stadium.

In Montiel they observe a more defensive profile that would help contain the left winger who decides to put “Tata” Martino in his immovable 4-3-3 scheme.

Molina did not have his usual participation in attack against Arabia since Ángel Di María stuck to the line and did not leave holes for him to climb that lane.

This variant could lead to the entry of Marcos Acuña by Nicolás Tagliafico in the left sector to take advantage of the good centers of “Huevo” in attack, as happened during the first half of the last friendly against the United Arab Emirates.

Then, the safest change that is outlined in the last line is in the central defense where Lisandro Martínez would replace Romero.

In midfield, Enzo Fernández’s chances for the position that Alejandro Gómez would leave are growing.

The presences of Leandro Paredes and Rodrigo De Paul do not seem to be at risk but in the case of the Juventus player his physical response will be key.

Since he was inactive for a little over two weeks in Italy, the former Boca Juniors still could not play a full game and the most he played was 74 minutes in the friendly against the United Arab Emirates.

Upstairs everything would continue the same with Ángel Di María on the right, Messi free all over the front and Lautaro Martínez as a reference.

Scaloni will speak tomorrow at a press conference at the Doha Media Center at 9.30 and from 12 he will lead the last practice session before the crucial game with Gerardo Martino’s “Tri”.

The man from Santa Fe will not confirm the team but will try to deepen the message that Messi sent down after the defeat with the Arabs to turn the page and believe in the union and strength of the champion team of America and the Finalissima that was one game away from equaling the Italy’s historic unbeaten streak.

“Look if we are not going to trust”, was the message that the president of the AFA, Claudio Tapia, wrote on his Twitter with the photos of the celebrations of the aforementioned conquests.