Gabriel Clemens: Does his coolness make him the new darts world champion? 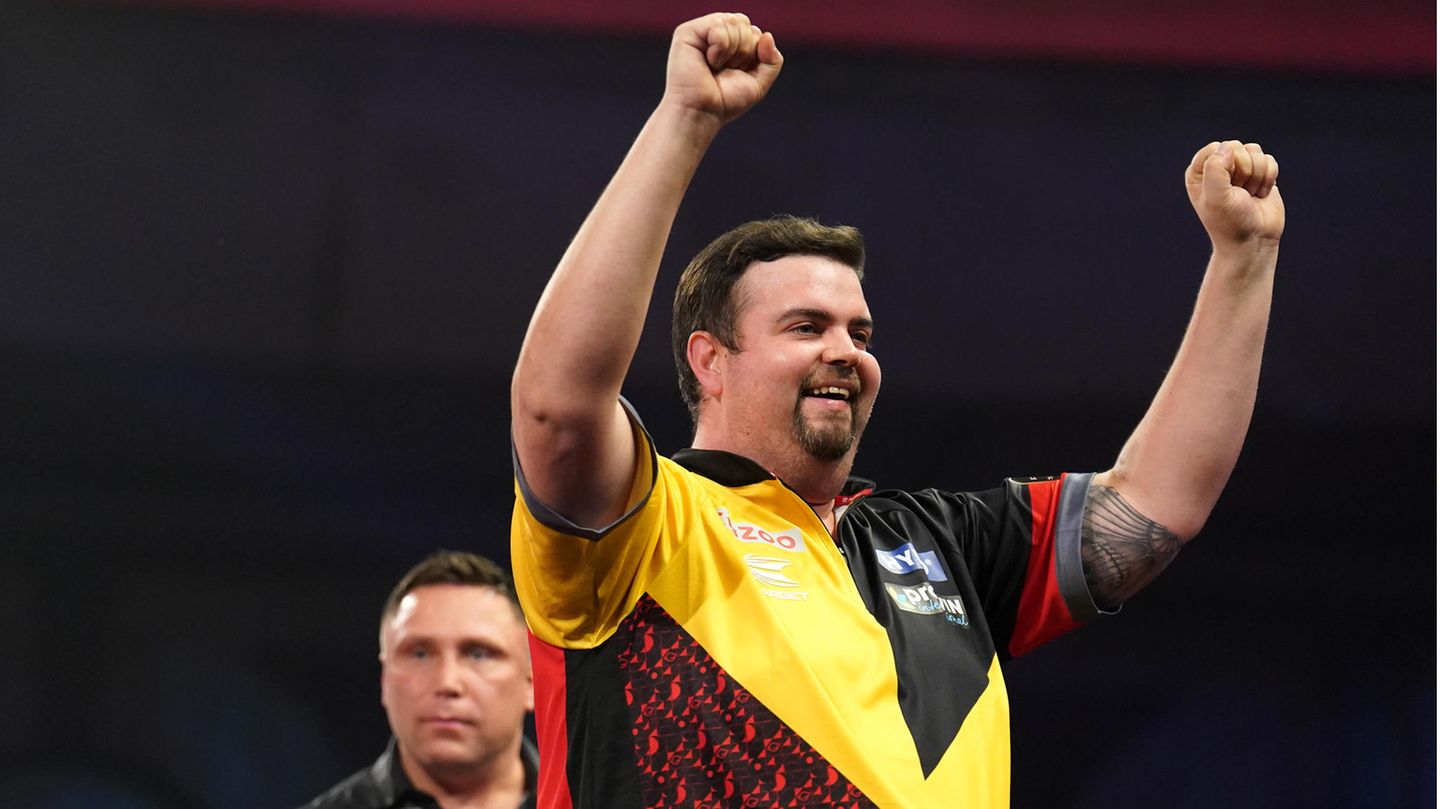 Gabriel Clemens is the first German to reach the semi-finals of a darts world championship. Experts had believed him capable of such a feat for a long time. Now the 39-year-old finally called them off – and could already cause the next sensation today.

When Gabriel Clemens stepped up to the throwing line (“Oche”) at around 9:50 p.m. on Sunday to throw his first match dart, none of the spectators in Alexandra Palace in London could stay seated. A sensation is in the air. With 4: 1 sets, the Saarlander surprisingly leads against Gerwyn Price, world champion of 2021 and at that time still number one in the world. And there are only eight points left – ideally to play to zero on the double four – that separate the 39-year-old from the greatest success of his career.

The rest is quickly told: Clemens checks out with the first dart for a 5-1 victory and thus achieves what no German has managed to do before: entering the semi-finals of a darts world championship. The crowd at Ally Pally is raging – and for the first time that evening, Clemens seems really overwhelmed with the situation for a brief moment.

You can not only feel overwhelmed at the moment of victory – it can also arise in the game itself, sometimes coupled with panic. Especially when one of the opponents seemingly effortlessly plays against the wall. That’s exactly what Clemens experienced in the first set against darts “badboy” Price. The extroverted muscle man beat him 3:0 in less than five minutes. That might have broken some players, but from the second sentence Clemens remembered a strength that hardly any other player in the world of darts has: the ability to focus 100 percent on your own game during a match focus and block out everything else.

“Darts is like permanent penalty shooting”, Clemens once described the mental stress on stage in an interview with the “Süddeutsche Zeitung”. During the legs, which last one to two minutes, it’s always back and forth, the situation is constantly changing. “I have to make quick decisions all the time.”

Full-time professional instead of industrial mechanic

To ensure that this is as successful as possible, Clemens, who only came to darts at the age of 18 through friends, but then quickly let his talent flash, now works with a mental coach like many other top players. In addition, there are four to five daily training hours on the dartboard and athletic units in the gym, which are intended to stabilize the throwing movement.

A workload that has long since only been feasible as a full-time professional. Clemens decided in 2019 to give up his work as an industrial mechanic and to concentrate fully on throwing darts. At that time he already had successes in the darts federal league and in Pro Tour tournaments of the PDC (Professional Darts Corporation), but the real breakthrough only came when the double burden of work and sport ended. Clemens did not rule out a return to his job at the time. “Of course, if I’m no longer successful and can no longer earn my living, I would go back to the workbench, that’s very clear,” he told the Süddeutsche Zeitung.

News about the darts world cup

But success came and stayed. Since then, Clemens has twice made it into the round of 16 of the UK Open (2020, 2021), he took part in the Grand Slam of Darts and in 2020 reached the semi-finals of the World Cup of Darts together with compatriot Max Hopp. Clemens, who was born in Saarlouis, has also been a permanent guest at the Darts World Cup in London since 2019. He achieved his best result there until yesterday, Sunday evening in 2020, when he defeated the then reigning world champion Peter Wright in round three and made it into the round of 16, which was the final stop.

Arrived at the top of the darts world

The fact that the big breakthrough did not want to succeed at that time did not bother Clemens, who was also extremely reserved away from the stage. The 39-year-old told the “Spiegel” newspaper that he was going “step by step” on his way to the top of the world. If that’s the case at some point, it’s good. If not, then I have to work even more,” explained Clemens, who today also runs his own darts shop in Merzig and, as a fan, keeps his fingers crossed for the third division soccer team 1. FC Saarbrücken.

Since then, hard training, talent, experience and mental strength have made Clemens the currently best and – perhaps even more important – most consistent German player. A development that experts had believed him capable of for some time. But it was often the nerves that failed Clemens – especially in tournaments with TV accompaniment – in the important moments. In addition, his quiet, shy nature did not necessarily make him the darling of the audience for a long time, who also come to tournaments for the show.

There was no sign of that on Sunday evening. From the start, the spectators supported the German (nicknamed “Gaga”), who occasionally even interacted with the audience and of course played a much more decisive role in the outcome of the match: his absolute A-game in Ally Pally. With an average (average score with three arrows) of 99.94 points, he set a new German record at the World Cup. Thanks to his good scoring, he was even able to cope with several misses on the double field without Price being able to endanger him. Even at such moments there was no trace of uncertainty.

Wife Lisa always at the side

Clemens even stayed focused when Price, known for his psychological tricks, suddenly returned to the stage in sentence five with huge construction site headphones – presumably to block out the background noise. But maybe also to throw Clemens out of the concept. The action only had one effect on the 39-year-old: He wanted to win set five and the match all the more. The end is known.

While Price, who had never lost to Clemens before and is now rid of his status as the world number one, congratulated his opponent and then quickly disappeared from the stage, the German initially seemed a bit overwhelmed by the unexpected success. His wife Lisa Heuser, who watched the game live in the audience, even shed a few tears of joy. The two met at a tournament at the disc. Today, Heuser plans appointments and trips for the professional and is often in the big halls in Great Britain and Germany himself. “She’s my great support, something like my anchor,” said Clemens.

Clemens had to do without a supporter for the biggest success of his career so far, which already brings him prize money of more than 110,000 euros and allows him to climb up the world rankings: friend and darts colleague Martin Schindler, with whom the 39-year-old regularly drives to the tournaments. At the World Cup, too, you could see Clemens sitting in the box at Schindler’s games – and vice versa. For Schindler, however, the World Cup was over before Christmas. In round three, Schindler lost to the Englishman Michael Smith 3:4 – exactly the opponent Clemens meets in the semi-finals on Monday evening (from 8.30 p.m. / Sport1 and DAZN).

Even then, the German will be the big outsider again. Unlike Clemens, however, the “Bully Boy” did not manage to call up his best game in his quarterfinals. If Smith doesn’t improve and Clemens stays with himself for the whole game, the next sensation at the Darts World Cup cannot be ruled out. Especially since the “German Giant” can not only take revenge for his friend’s bankruptcy. There is also prize money of £200,000 for the top two.

Share
Facebook
Twitter
Pinterest
WhatsApp
Linkedin
ReddIt
Tumblr
Telegram
VK
Digg
LINE
Viber
Previous article
New beginnings: why we should dare to break new ground more often
Next article
The hard moment that Martina Navratilova is going through: “I will fight with everything I have”