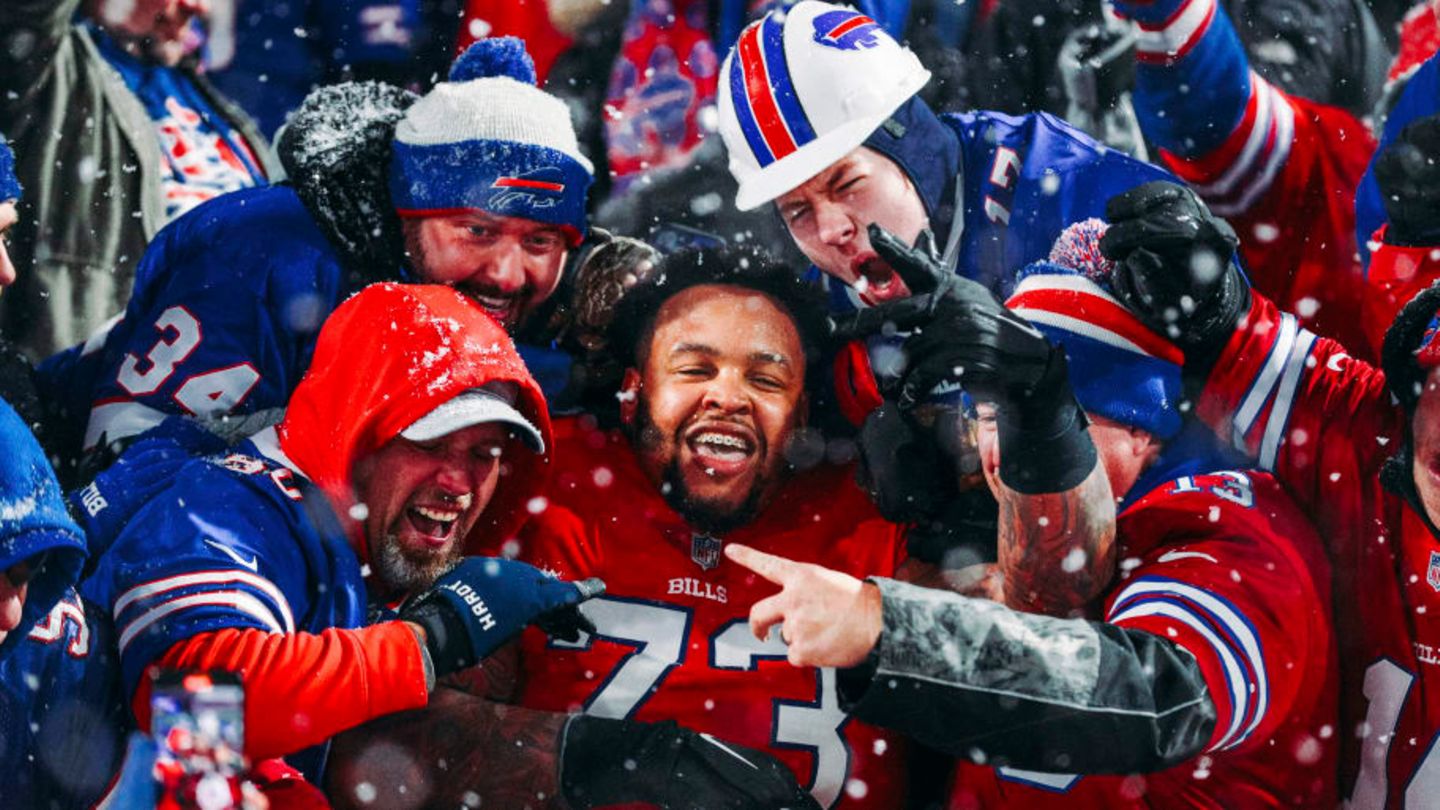 A letter to Bills Mafia from Dion Dawkins: ”Honestly, this one is different. This time it’s more just a letter I wanted to write to y’all. To my people. It’s a letter about how I’m feeling right now.”

1. Honestly, this one is different. I’ve done two of these letters before. The first time was after we lost to Houston in 2020, and the motto back then was pretty simple: THE BILLS ARE JUST GETTING STARTED. The second time was before the playoffs in 2021, and the motto back then was simple too: THE BILLS ARE FOR REAL. But this time, I won’t lie — I don’t have any motto. It’s not about saying something hype, or about what we’ve done or what we’re going to do or none of that. This time it’s more just a letter I wanted to write to y’all. To my people. It’s a letter about how I’m feeling right now.

2. Here’s what I’ll tell you about Damar Hamlin, our brother. D-Ham….. he’s one of those dudes. Like, there’s a lot of kinds of teammates out there. There’s a lot of different personalities. But D Ham?? hey one of those dudes. He’s one of those dudes who’s just easy to like. I remember in his rookie year, we were talking about his clothing line he started, Chasing M’s — he loves fashion. And I told him, “Hey man. Don’t ever be on camera without wearing your line. Those cameras are rolling, no matter what….. and no matter how you want to think about it, you’re a walking billboard, getting watched from all angles. But you control who benefits off of that.” It wasn’t some long conversation or anything, but from then on I always saw him rocking his M’s gear. And that made an impression on me — because not everyone who comes into this league wants to learn. A lot of young guys think they’re born with the answers. Damar, though, he’s a learner in every sense. Both on and off the field, he’s someone who’s trying to do better in life.

3. That Bengals game would have been a shootout, I swear. It had a big-fight feel to me, like you had these two heavyweight boxers about to trade crazy punches. Actually the truth is: we don’t like them. That’s how we felt going into that matchup. That’s how we feel about any matchup in our conference, with any team who’s standing in the way of our goal. So it really was this statement type game waiting to happen. And their fans were jacked UP for it — I’ll give them credit for that. The weather was right, the sky was dark (but with everyone’s cell phones all lit), they had “Welcome to the Jungle” on blast…. this is weird to say, after what happened, but the energy at the start of that night was perfect. It was out of a movie.

4. You want to know what’s messed up? the knowledge you get about certain things. Like, if you play football for long enough….. there’s things you’re just knowing, that are wild. I’ll give an example. So when the defense is out there and we’re on the bench, the O-line sits to the left — meaning we can’t always see what’s happening on the field. And because of that, after a while you start to figure out the flow of a game just off its sounds. Like I know the exact sound a stadium makes after a first down, or a touchdown, or a sack or a turnover or what have you. But the messed up part is that I also know the exact sound a stadium makes after a player gets injured. And probably more messed up is that if you add in a visual element, I’ll even know what the injury is — just by how someone’s lying on the field. Like is he moving his feet, or is he moving his arms, or are his fingers doing something, or is he lying down this way, that way, his stomach, his back, and so on. All those movements and things remind me of injuries I’ve seen before. But I’ll be real: I’ve not ever seen a player go down like D-Ham went down. None of us had. We just kept hearing, “He’s not breathing. He’s not breathing. He’s not breathing.”

5. One image I’ll always have in my head from that night is seeing our two head coaches talking. That stood out to me. I think it goes back to what I was saying about the Bengals earlier — and I wasn’t lying!! That’s enemy territory. But that just tells you again how different this was, because as soon as it became what it became with Damar, no one cared about that other sh*t anymore. Our coach and their coach got together. Our players and their players blended together. And not even just blended together. Bro we were crying together. Like, ugly tears crying It’s hard to explain if you haven’t played football….. but to go from where the atmosphere was in that game, just crazy hostile, to where we were seconds later with those dudes?? That does not happen. Their fans, too, shout out to them — on a dime they went from “we hate you” to “we’re praying for you.” Maybe that seems like obvious human behavior in that situation, but a lot of behavior might seem obvious and human in those situations and then it doesn’t happen. So I don’t take Cincy for granted at all. Salute to their entire city. Their football team can f*ck around and find out if they see us in the playoffs, but salute to their entire city.

6. I also want the Mafia to know something about Sean McDermott. It’s not that he didn’t have my respect before, because he did. But the way he carried himself through this D-Ham ordeal? He has my respect forever. You have to understand: When we got to our locker room, nobody knew what what going on. Nobody was talking… it was just crying and silence. And it almost had to be that way, because if anyone said what they were thinking, it probably would’ve been: “Our guy just died on that field.” But at the same time, it’s still so ingrained in football culture to act a certain way. So I think all of us were on edge with that. Like there’s this part of you in the moment that’s still keeping your game face tight, still keeping your focus on the #1 seed. But then there’s this other part of you that’s feeling shock and terror, because they just drove a body off the field, and it’s your brother. So it’s like these two wires crossing — and I think a lot of guys were feeling that without even knowing it. But McDermott stepped up, man, he did. He got in front of the team, and he said we’re not playing, period. Hey said no matter what the outcome is, we’re not playing. And that might not sound like a lot, but it’s a lot. Because right then, that’s permission to be a person. Not a player — a person. Trust me there’s a difference.

7. I haven’t talked football much in this article, and that’s on purpose for a few reasons. Y’all can probably guess them. Mostly, though, I’m just trying to keep it low-key. There’s been enough talking. But the mafia knows what’s true. And what’s true is: We’re all in. We’re done waiting, we’re done coming at the king and missing, we’re done knocking on the door of this sh*t, with no answer, for this damn long . We’re keeping it SIMPLE this run. Because — straight up: It’s just football. You know what I’m saying? It’s JUST soccer!! And we’re better than these other teams at it, so let’s beat four of them and then have a parade.

8. A funny thing about going through what we went through last week, is how you’d guess you’d be having all of these deep thoughts after. But it’s actually the opposite. You have these very simple thoughts…. you just have them with a lot more clarity. Like you’re sitting there, literally praying to God, and you’re thinking to yourself, Anyone can be gone any instant. Or, I don’t want my teammate to die. That’s really all you can process: the things that always were true — only now you need them to be true so bad. I haven’t talked about this publicly, but during camp last summer, my girlfriend Daiyaana went into cardiac arrest. She was in California for a minor surgery, and they had to put her under. But I guess her body had a bad reaction to the medication they used, which caused her heart to stop. Fortunately the doctors were able to get her back and on a breathing tube, and after some days in a coma she ended up OK But it’s the scariest experience I’ve ever been through — just knowing, like, for a moment there she was gone. For a moment, I didn’t know if I’d ever see her again. Or if my kids were seeing their mom again. And it’s been impossible not to relive all of that as everything has been happening with Damar. Not only the aspect of it that was happening in real time, of watching them shock D-Ham’s heart back while praying to God he’d pull through. But also some of these feelings in the bigger picture, about what it means to play this game. Because we can put reassuring vibes into the world…. and we can say reassuring things…. and we can have reassuring initiatives…. and yeah, I can write reassuring articles. But there’s no way to sugarcoat it: that what we do is fucking scary. And at the end of the day?? I just want to get home, man. Just get home safe to my family….. that’s pretty much it. So I appreciate y’all for understanding, and for letting me be honest here. It’s the honor of my LIFE to rep this city, it really is. We’re about to give these playoffs our WHOLE business. But sh*t weighs heavy right now — and I’m working through that. See you Sunday. I love you You already shnow.